What is a Pharmacist: Opinions of Pharmacy Department Academics and Community Pharmacists on Competences Required for Pharmacy Practice

Ranking data on competences for practice were obtained using the PHAR-QA surveymonkey [10] questionnaire that was available online from 14 February 2014 to 1 November 2014, i.e., 8.5 months [11]. Respondents came from 36/49 countries of the European Higher Education Area [12].
The first six questions were on the profile of the respondent (duration of practice, country of residence, current occupation (industrial, community… pharmacist)). There was also a question on the job title. This allowed a subdivision of industrial pharmacists according to their experience/activity: regulatory affairs, research and development, etc. A similar subdivision of the activities of community pharmacists was not possible, as all respondents in this group were involved in some form of dispensation to patients.
Questions 7 through 19 asked about 13 clusters of 68 competences (see Appendix A). Questions in clusters 7 to 11 were concerned with personal competences, and in clusters 12 to 19 with patient care competences.
Respondents were asked to rank the proposals for competences on a 4-point Likert scale:

(1)
Not important = Can be ignored;
(2)
Quite important =Valuable but not obligatory;
(3)
Very important = Obligatory, with exceptions depending upon field of pharmacy practice;
(4)
Essential = Obligatory.

There was also a “cannot rank” possibility as well as that of leaving the answer blank.
Results are presented in the form of “scores” calculated as follows:
Ranking score = (frequency rank 3 + frequency rank 4) as % of total frequency, which represents the percentage of respondents that considered a given competence as “obligatory”.
This calculation is based on a similar calculation made by the MEDINE consortium that studied the ranking of competences for medical practice [13]. Such scores are used for descriptive purposes only, and no conclusions on statistical differences amongst groups are based on scores.
Leik ordinal consensus [14] was calculated as an indication of the dispersion of the data using an Excel spreadsheet. The original Leik paper cited previously gives an explicit mathematical example of the calculation of ordinal consensus. Responses for consensus were arbitrarily classified as: < 0.2 poor, 0.21–0.4 fair, 0.41–0.6 moderate, 0.61–0.8 substantial, > 0.81 good, according to the scale used in MEDINE study.
The statistical significance of differences between rankings of competences or between rankings by different categories of respondents was tested by the chi-square test (confidence level 95%). Statistical tests were performed using GraphPad software [15].
Results are presented at 2 levels: that of the 13 clusters and that of the 68 competences.
Respondents could also add their comments on the different clusters. An attempt was made to analyze comments using the NVivo10 program [16] for the semi-quantitative analysis of unstructured data. It was found that the numbers involved were too small to draw significant conclusions.

Figure 3 and Figure 4 show the results for analysis by competences. In Figure 3, the values for Leik ordinal consensus are shown. 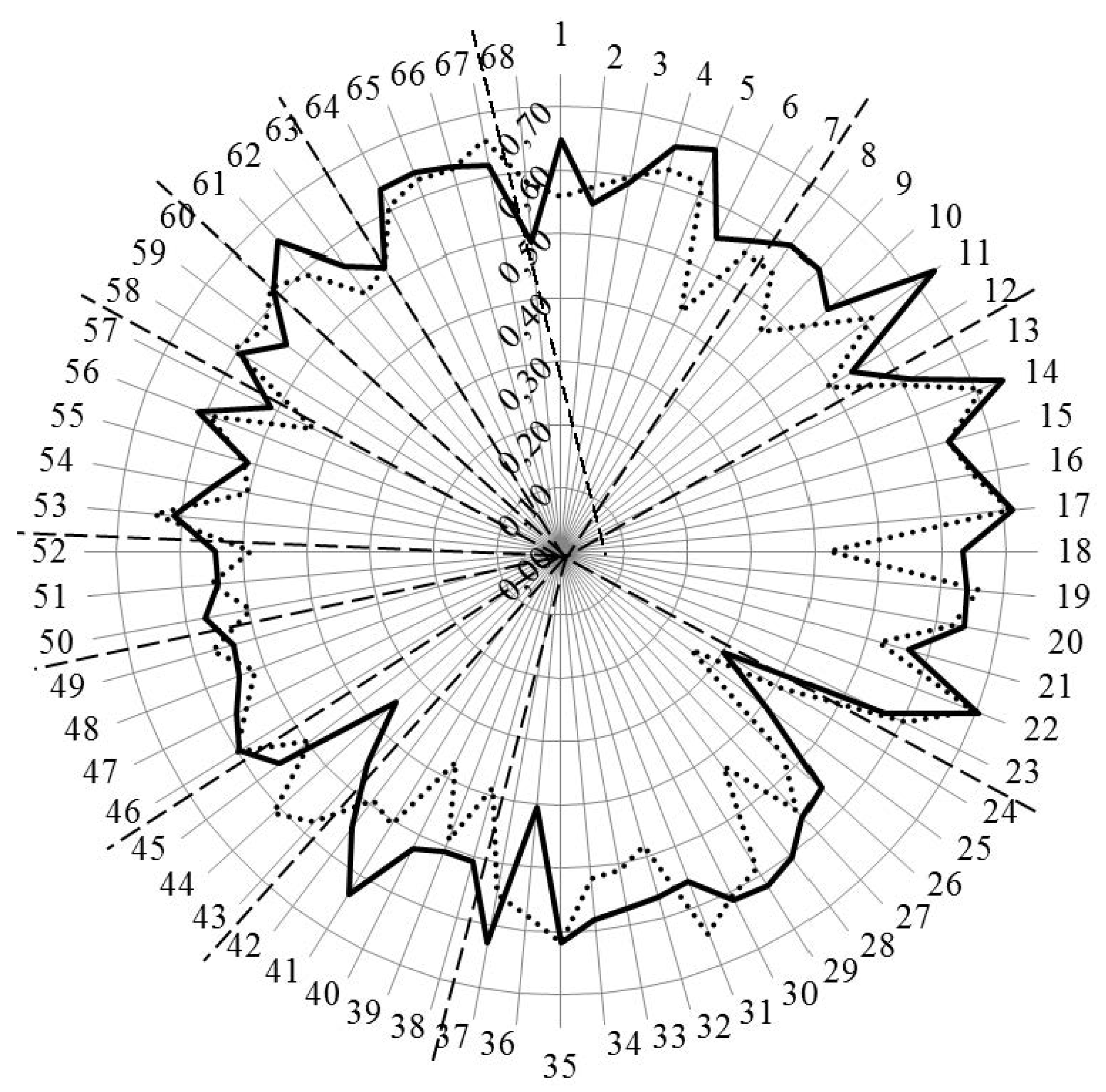 Competences centering on values, communication skills, etc. were ranked similarly by the two groups of pharmacists (industrial and community). In other areas, such as (1) drug research, development and production, and (2) patient care, scores suggest that the groups appeared to be ranking in the context of their own specific activity. These results are discussed in the light of the existence of, or need for, an “industrial pharmacy” specialization based on a specific competence framework. The latter is provided by the PHAR-QA framework.
The pharmacists’ perception of their profession is primarily determined within the context of their specific activities in their line of work. The split in opinion lies between “hard sciences” and “patient care.” The truth is that the pharmacy service that best serves the population at large involves both. Pharmacy students seldom know in advance whether they will end up working as industrial or as community pharmacists. Taking this into account, one could argue that a pharmacist should receive a balanced education involving the two areas and then specialize in one of the two as his/her professional career advances, post-registration. On the other hand, if the degree of specialization necessary is so profound that it would be best to start it from the educational phase, the specialty-oriented program may be the better solution. The discussion on this dilemma continues.

In light of the rankings and comments, a revised version of the competence framework will be sent out for survey. This will be followed by the proposal of a PHAR-QA competence framework for pharmacy practice.
Future papers will deal with results for hospital pharmacists, and academics. These papers, as does the present paper, will deal with the implications of the results obtained, thus contributing to the ongoing debate on the perceptions of professional identity of a pharmacist [17], in this case, with contributions that are backed up by hard data.

Appendix A. Ranking of Competences by Industrial and Community Pharmacists. (Seq.: Sequential Numbering (as in Figures).

Notes: Competences in bold are those showing a statistically significant difference in distribution of rankings between groups (chi-square, p < 0.05).