From Hispanisms to Anglicisms: Examining the Perception and Treatment of Native Linguistic Features Associated with Interference in Translator Training
Previous Article in Journal

The Emergence and Development of Syntactic Patterns in EFL Writing in a School Context: A Longitudinal Study

The present longitudinal study analyses the emergence and development of syntactic patterns in English as a Foreign Language (EFL) written production. Data were elicited by means of a paper and pencil task from sixteen school learners at three different times over a time span of 6 years. Studies in the area of Second Language Writing (SLW) have mainly focused on English as a second language and very few longitudinal studies have been carried out with low proficiency learners in a school context. To further contribute to the field, we have tried out a new measure of analysis, namely, the production of syntactic patterns. The results show that most learners produce both a wider variety and a higher number of patterns from one time to another, although statistically significant differences vary across patterns in relation to the times of data collection; secondly, it was found that the behaviour of two of the learners differed from that of the rest of the participants. It is concluded that in an instructional setting, the development of syntactic patterns in EFL writing as proficiency increases does not always show progression towards complexity and that it may be learner dependent. View Full-Text
Keywords: English as a foreign language; individual variation; syntactic patterns; Second Language Writing English as a foreign language; individual variation; syntactic patterns; Second Language Writing
►▼ Show Figures 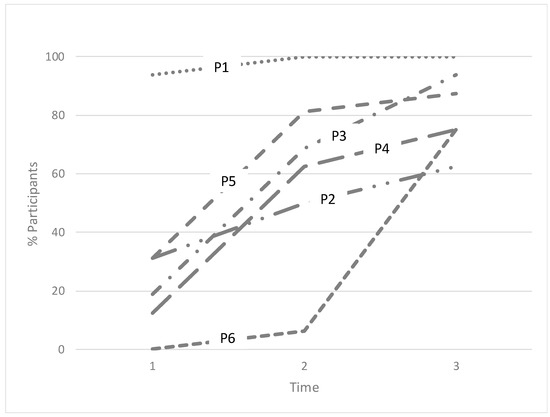 Celaya, M.L. The Emergence and Development of Syntactic Patterns in EFL Writing in a School Context: A Longitudinal Study. Languages 2019, 4, 41.


Celaya ML. The Emergence and Development of Syntactic Patterns in EFL Writing in a School Context: A Longitudinal Study. Languages. 2019; 4(2):41.


Celaya, M. L. 2019. "The Emergence and Development of Syntactic Patterns in EFL Writing in a School Context: A Longitudinal Study." Languages 4, no. 2: 41.