Large-scale space projects rely on a thorough Assembly, Integration, and Verification (AIV) process to provide the upmost reliability to spacecraft. While this has not traditionally been the case with CubeSats, their increasing role in space science and technology has led to new verification approaches, including in educational CubeSats. This work describes the integration and verification approach for ISTSat-1, which is an educational CubeSat from the Instituto Superior Técnico in Portugal that partially discards the typical stage-gate approach to spacecraft development in favor of a more iterative approach, allowing for the system-level verification of unfinished prototypes. Early verification included software functional testing on a flatsat model, thermal vacuum and vibration testing on a battery model, ionizing radiation testing on the on-board computer, and non-ionizing radiation (EMC) testing on all subsystems. The testing of functional prototypes at an early development stage led to uncovering system-level errors that would typically require hardware redesign at a later project stage. The team considers the approach to be useful for educational projects that employ a small, co-located team with low non-recurring engineering costs. View Full-Text
Keywords: CubeSat; iterative development; flatsat; ionizing radiation; EMC; battery qualification CubeSat; iterative development; flatsat; ionizing radiation; EMC; battery qualification
►▼ Show Figures 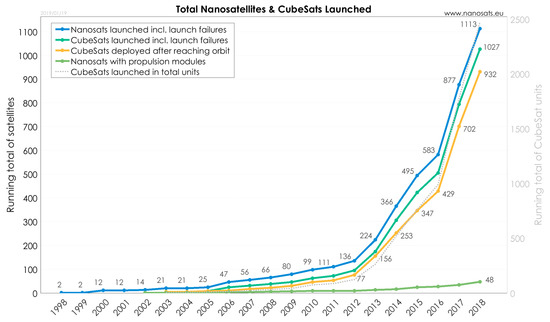