The Random Walk of Cars and Their Collision Probabilities with Planets

On 6 February 2018, SpaceX launched a Tesla Roadster on a Mars-crossing orbit. We perform N-body simulations to determine the fate of the object over the next 15 Myr. The orbital evolution is initially dominated by close encounters with the Earth. While a precise orbit can not be predicted beyond the next several centuries due to these repeated chaotic scatterings, one can reliably predict the long-term outcomes by statistically analyzing a large suite of possible trajectories with slightly perturbed initial conditions. Repeated gravitational scatterings with Earth lead to a random walk. Collisions with the Earth, Venus and the Sun represent primary sinks for the Roadster’s orbital evolution. Collisions with Mercury and Mars, or ejections from the Solar System by Jupiter, are highly unlikely. We calculate a dynamical half-life of the Tesla of approximately 15 Myr, with some 22%, 12% and 12% of Roadster orbit realizations impacting the Earth, Venus, and the Sun within one half-life, respectively. Because the eccentricities and inclinations in our ensemble increase over time due to mean-motion and secular resonances, the impact rates with the terrestrial planets decrease beyond a few million years, whereas the impact rate on the Sun remains roughly constant. View Full-Text
Keywords: space debris; dynamical evolution and stability; solar system space debris; dynamical evolution and stability; solar system
►▼ Show Figures 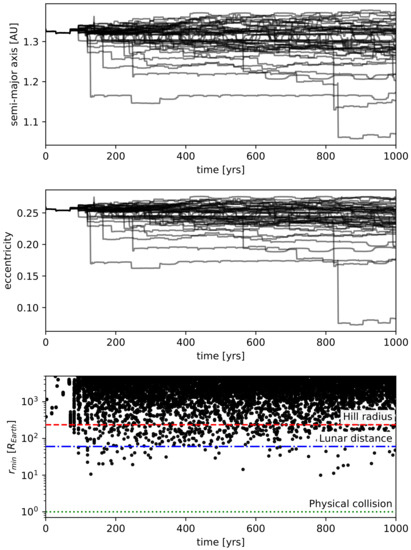 
Rein, Hanno; Tamayo, Daniel; Vokrouhlický, David. 2018. "The Random Walk of Cars and Their Collision Probabilities with Planets." Aerospace 5, no. 2: 57.