The Origin and Propagation of the Antarctic Centennial Oscillation

Forests contain ~80% of above ground carbon and sequester ~30% of annual fossil fuel emissions, and thus have a prominent role in the carbon balance [1,2]. The distribution of terrestrial ecosystems is strongly influenced by climate [3,4,5,6], so how ecosystems reorganize from climate change presents an important research area in regards to terrestrial carbon. Paleoecological records predicted forest migration rates during the last glacial period greater than considered possible [7,8,9,10,11]. Two theories for how this happened are rapid migration and refugial populations, and is known as Reid’s Paradox [12,13,14]. For large domain studies that predict the potential redistribution of vegetation by plant migration due to expected future climate change, Dynamic Global Vegetation Models (DGVMs) or Earth System Models (ESMs) are used. Research at these domain sizes often implement scaling strategies at the cost of some fine scale processes, such as individual-based plant migration, to reduce computational requirements. Therefore, improvements to their underlying vegetation demographics are continued and are important research topics, especially when predicting the redistribution of vegetation from plant migration due to climate change.
Most DGVMs are cohort, not individual, based, and given the complexities of dispersal between grid cells, they approximate the transient response of plant migration due to climate change through other methods [15,16]. TRIFFID [17] leaves a fraction of its seed bank in all cells, so if climate changes, better adapted species may alter the species composition. Sheffield-DGVM (SHE) [18,19], ORCHIDEE [20], and Lund-Postdam-Jena (LPJ) [21] have establishment of climatically favored plant functional types (PFTs). However, there is no between grid cell dispersal due to the complexity of this interaction, and partially because they are not individually based. Two DGVMs are individually based, and have attempted to simulate the transient response of vegetation between grid cells. SEIB-DGVM [22,23] is individually based and simulated migration between cells in Africa. For each half-degree cell, a 30 m × 30 m forest gap model was run and unlimited vs. no-migration simulated. The difference in the size of the cell and the spatial extent of the gap model did not allow for simulations at a specific dispersal distance. LPJ-GUESS [24,25] had dispersal between patches (smaller areas within a grid cell), and calculated the probability of spread to a neighboring cell based on a dispersal kernel, but only in an idealized landscape. The difficulties of simulating this fine scale process in a larger domain means most dispersal and migration studies continue to occur in Forest Landscape Models such as TreeMig [26], which has simulated regions of European Forest, and LANDIS-PRO [27,28], which has simulated multiple regions of the US. Moving beyond regional scales of simulating the transient response of plant migration with explicit dispersal remains a challenge.
Another DGVM, the Ecosystem Demography (ED) [29,30], is individually based. One of the reasons it is able to simulate large domains is that it is pseudo-spatial. Within every grid cell, the number of individuals of a PFT and their size and age, and the area they occupy (patch size) are known, but the explicit location in the grid cell is not. Recently, a pseudo-spatial dispersal sub-model was developed and implemented in ED [31]. It simulates the spatially explicit process of plant migration from dispersal in the pseudo-spatial framework of ED. Here, previous research where the PFT distribution in ED for northern North America was validated with remote sensing data, and then a climate change scenario run that showed the equilibrium response of vegetation and carbon was used with the new dispersal sub-model, and the transient response from individual-based dispersal in large domains explored with multiple scenarios. The migration sub-model is run with a model experimental designed to investigate the impact of (1) dispersal distance, (2) dispersal mode, and (3) disturbance rate on the potential transient redistribution of terrestrial vegetation and carbon from climate change in northern North America over a range of time scales (years–millennia).

ED [29,30] is a mechanistic model that uses a size and age-structured approximation for the first moment of the spatial stochastic process of vegetation dynamics. The size and age-structured approximation means it is an individual-based model of vegetation dynamics that is pseudo-spatial instead of spatially explicit. Individuals compete mechanistically for water, nutrients, and light, governed by sub-models of growth, mortality, water, phenology, biodiversity, disturbance, hydrology, and soil biogeochemistry. Plants in ED are represented by PFTs, which group vegetation into classes dependent on physiognomy, leaf form, photosynthetic pathway, and other characteristics, and are adjusted for the region of study. Following Hurtt et al. [32], trees in North America are represented by two dominant types, cold deciduous and evergreen, with the modifications made by Flanagan et al. [33]. That research used advanced remote sensing to calibrate ED for the proper PFT distribution under contemporary climate, and then simulated a climate change scenario to determine the equilibrium response. Those findings supported additional research into the transient response of plant migration in that domain under that climate scenario. ED has also been successfully implemented in South, Central, and North America, as well as Mozambique [34,35,36,37,38,39,40]. It is currently being used in NASA’s Carbon Monitoring System (CMS) [39,41], and the NASA Global Ecosystem Dynamics Investigation (GEDI) mission [42].
The dispersal sub-model in ED [31] replicates the spatially explicit process of dispersal in its pseudo-spatial environment. Though pseudo-spatial, ED is still individually based. Inside of a grid cell, seeds are produced by individuals in a known area called a patch, that is a fraction of the grid cell. With a given dispersal distance, the proportion of seeds produced by a species expected to disperse outside the patch is calculated by the relationship between the size of the patch and the dispersal distance. Then, the size of the patch is related to the grid cell size to determine the final proportion of seeds that would enter a new grid cell. Between grid cell dispersal is a function of a chosen dispersal distance, the seeds produced by individuals and the size of the patch they were produced on, and the size of the grid cell.
A model experimental design that used the dispersal sub-model evaluated the impact of dispersal rate, dispersal mode, and disturbance rate on the transient response of migration to climate change in northern North America (40°N to 75°N, and 165°W to 50°W). Eighteen cases were considered; dispersal rates of 0.1 km, 1 km, and 10 km; disturbance rates at the model’s standard 1.2% per year, doubled and tripled; and directed or even dispersal. The maximum migration rate for many species in this area is 1 km per year [43], so that was the median dispersal rate, and then an order of magnitude higher and lower were chosen. The disturbance rates were selected based on Dolan et al. [36], who used a similar region with the same model and climate scenario to examine climate change and disturbance impacts on these forests. To better examine competition, dispersal was “directed” to an area that was recently disturbed, and hence would have limited competition for light and nutrients or “even”ly spread proportionally across the entire grid cell. Each scenario started with a 1000 years run of the current climatology to stabilize the initial biomass and PFT distribution. Exploration of initial results informed the decision to simulate an additional 2000 years with the future climatology. The climate was abruptly changed as the thirty-year gap between climatologies was deemed minor with the length of the simulations. The plant migration transient response results were evaluated by percent total carbon and percent dominant PFT type of the equilibrium future climate distribution they predicted at the end of the simulation and through time. Dominant PFT of a grid cell was determined by applying the National Land Cover Dataset 1992 (NLCD92) [44] classification for forest composition of 75% cover of a particular type, deciduous or evergreen, otherwise the forest was classified as mixed. Sites below 25% cover were considered non-forest.

Two climate data sets were used. A current climate data set established contemporary carbon and PFT distribution as supported by remote sensing data [33], and a future climate data set established the predicted equilibrium responses and was used for the transient response scenarios. The current climate data set was from the Multi-Scale Synthesis and Terrestrial Model Intercomparison Project (MsTMIP) conducted by the North America Carbon Program (NACP) [45,46]. It is a combination of the Climate Research Unit (CRU) and National Centers for Environmental Prediction (NCEP) climatologies at 0.5 × 0.5 degree global resolution from 1901–2010 in a WGS84 projection at 6 hourly time steps. The future climate data set was from the North American Climate Change Assessment Program (NARCCAP), which produces multiple future climatologies at ~50 km resolution [47]. The choice to use this data was made because ED requires specific humidity inputs, and this program is one of the few which includes this in the climate change scenarios. Future climate projections are provided by coupling a set of regional climate models (RCMs) driven by a set of atmosphere-ocean general circulation models (AOGCMs) forced with the Special Report on Emission Scenarios (SRES) A2 scenario for the 21st century. The A2 scenario is the only one currently simulated. One of the first combinations available to the community, and hence used, was the Community Climate System Model (CCSM) as the driving model and MM5I as the regional model, and contained future climate data from 2041–2070 at 3 hourly time steps in a Lambert Conic Conformal projection. The climate is warmer and wetter. The NARCCAP climate data set was converted to half-degree resolution with a WGS84 projection to match the current climate data set.

3.1. Comparison of the Transient Response of Migration to the Equilibrium Response

The temporal response of plant migration showed that the evergreen PFT increased its carbon stocks after the start of the simulation. This caused total carbon stocks to overshoot the predicted future equilibrium total carbon before approaching it as migration occurred (Figure 8). All scenarios demonstrated this same trend but differed in the time it took to approach equilibrium.
The transient response from migration produced potential carbon storage that exceeded that of the equilibrium response because of the time it took for the new dominant PFT to migrate. Though deciduous species eventually established in areas that were initially evergreen, until that occurred, the evergreen species stored slightly more total carbon than the deciduous species did once it finished migrating (Figure 9). After 100 simulation years, the difference in total carbon from the equilibrium response showed an increase in carbon at many sites (Figure 9A, green). The difference from the evergreen PFT showed it was responsible for the increased carbon (Figure 9B). At the end of the simulation, carbon typically matched the equilibrium response (Figure 9C), except where evergreen migration had expanded the northern extent of the forest (Figure 9C,D). 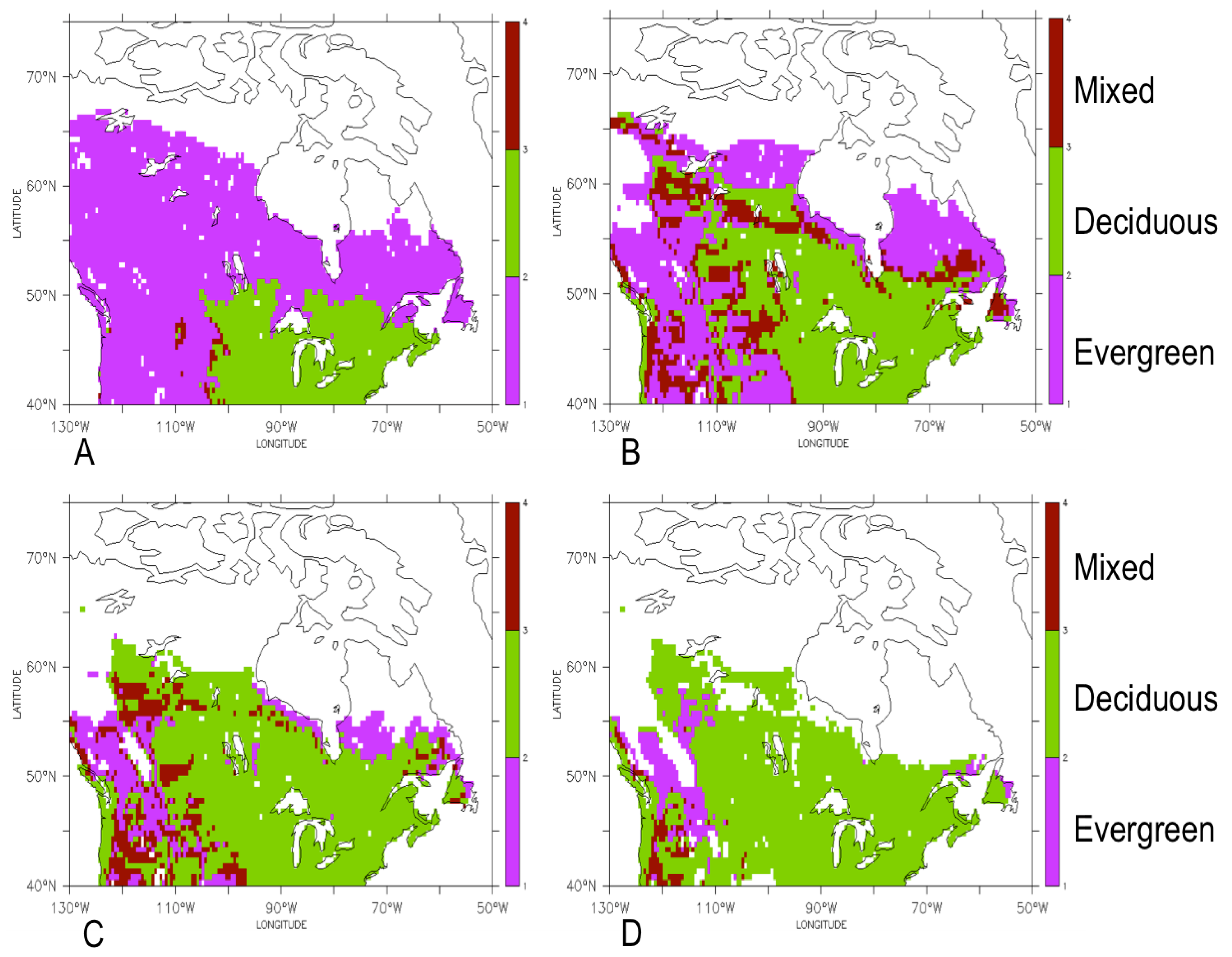 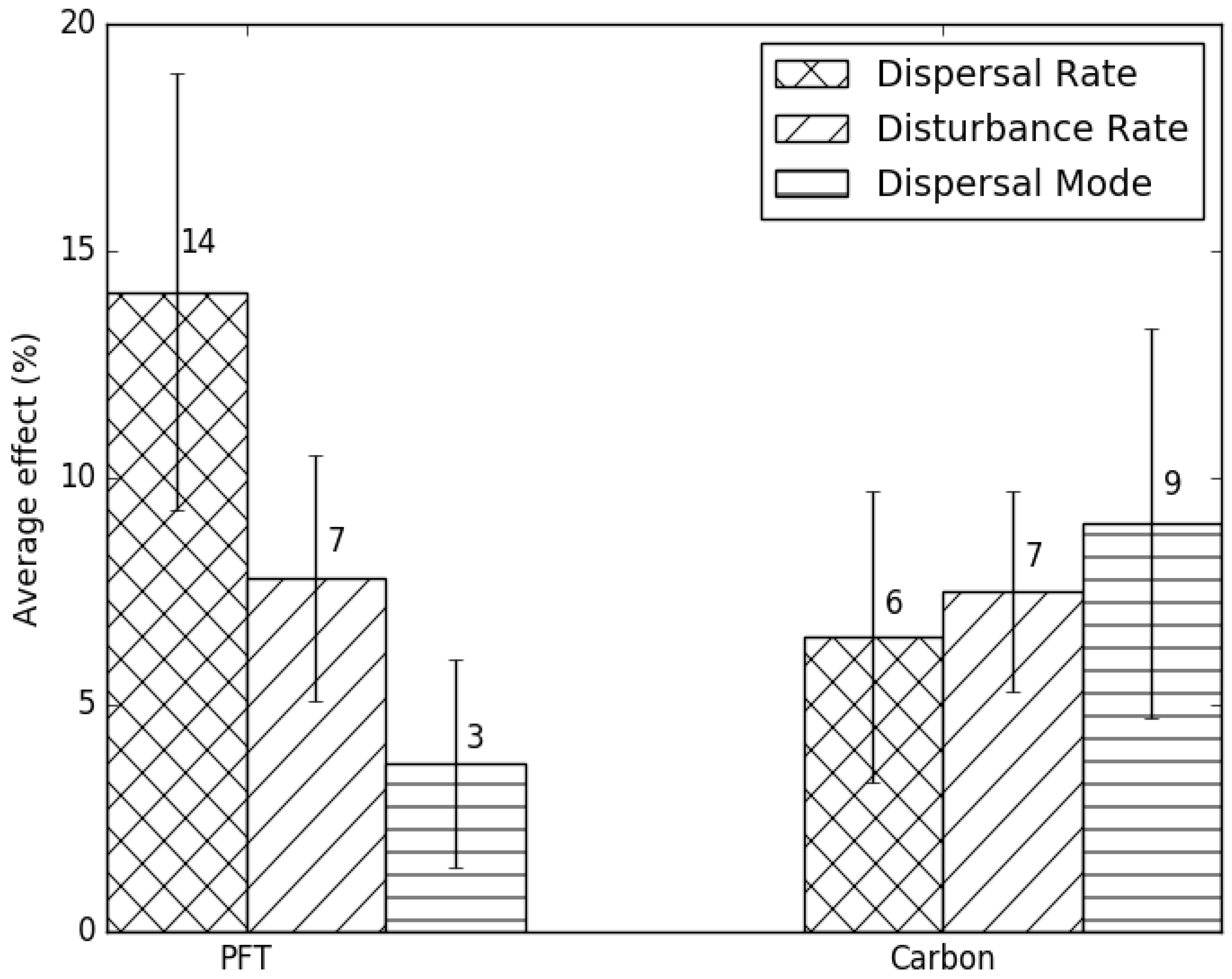 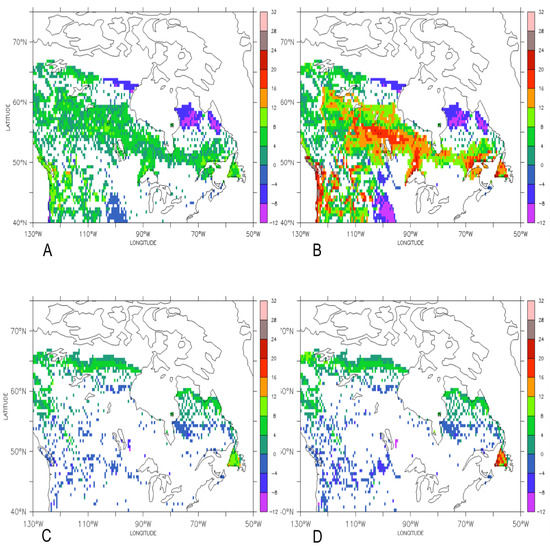