The Hiatus in Global Warming and Interactions between the El Niño and the Pacific Decadal Oscillation: Comparing Observations and Modeling Results

The Intergovernmental Panel on Climate Change (IPCC) noted a recent 15-year period (1998–2012) when the rate of surface global warming was a factor of 4 smaller than the mean of the state-of-art climate model projections and than that observed in the previous three decades. When updated to include 2014 by Karl et al. using the new version of NOAA data, the observed warming trend is higher, but is still half or less, depending on dataset used, that of previous decades and the multi-model mean projections. This period is called a surface warming slowdown. Intense community efforts devoted to understanding this puzzling phenomenon—puzzling because atmospheric greenhouse gas accumulation has not abated while surface warming slowed—have yielded insights on our climate system, and this may be an opportune time to take stock of what we have learned. Proposed explanations differ on whether it is forced by counteracting agents (such as volcanic and pollution aerosols and stratospheric water vapor) or is an internal variability, and if the latter, on which ocean basin is responsible (Pacific, Indian, or Atlantic Ocean). Here we critically review the observational records, their analyses and interpretations, and offer interpretations of model simulations, with emphasis on sorting through the rather confusing signals at the ocean’s surface, and reconciling them with the subsurface signals. View Full-Text
Keywords: global warming slowdown; hiatus; IPO; trade wind intensification; AMOC; AMO global warming slowdown; hiatus; IPO; trade wind intensification; AMOC; AMO
►▼ Show Figures 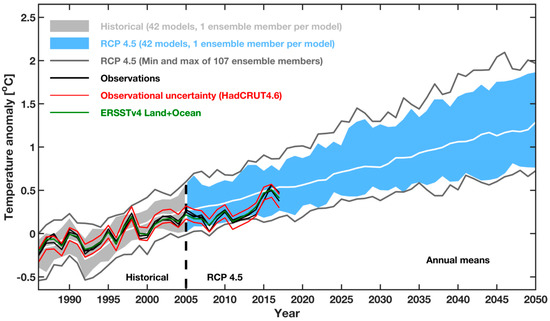