Climate and the Decline and Fall of the Western Roman Empire: A Bibliometric View on an Interdisciplinary Approach to Answer a Most Classic Historical Question
Previous Article in Special Issue

Ocean heat content (OHC) is the major component of the earth’s energy imbalance. Its decadal scale variability has been heavily debated in the research interest of the so-called “surface warming slowdown” (SWS) that occurred during the 1998–2013 period. Here, we first clarify that OHC has accelerated since the late 1990s. This finding refutes the concept of a slowdown of the human-induced global warming. This study also addresses the question of how heat is redistributed within the global ocean and provides some explanation of the underlying physical phenomena. Previous efforts to answer this question end with contradictory conclusions; we show that the systematic errors in some OHC datasets are partly responsible for these contradictions. Using an improved OHC product, the three-dimensional OHC changes during the SWS period are depicted, related to a reference period of 1982–1997. Several “hot spots” and “cold spots” are identified, showing a significant decadal-scale redistribution of ocean heat, which is distinct from the long-term ocean-warming pattern. To provide clues for the potential drivers of the OHC changes during the SWS period, we examine the OHC changes related to the key climate modes by regressing the Pacific Decadal Oscillation (PDO), El Niño-Southern Oscillation (ENSO), and Atlantic Multi-decadal Oscillation (AMO) indices onto the de-trended gridded OHC anomalies. We find that no single mode can fully explain the OHC change patterns during the SWS period, suggesting that there is not a single “pacemaker” for the recent SWS. Our observation-based analyses provide a basis for further understanding the mechanisms of the decadal ocean heat uptake and evaluating the climate models. View Full-Text
Keywords: OHC; surface warming slowdown; hiatus; global warming; PDO; ENSO; AMO OHC; surface warming slowdown; hiatus; global warming; PDO; ENSO; AMO
►▼ Show Figures 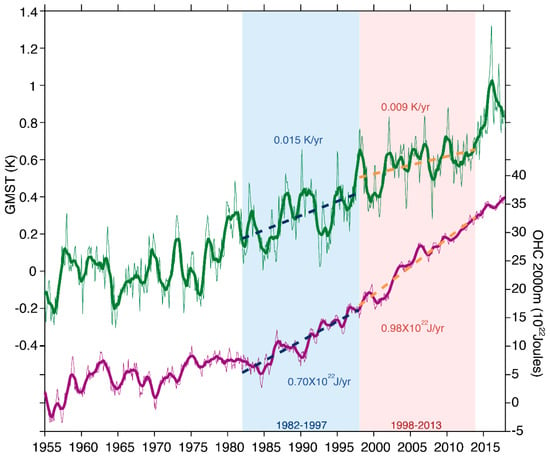