Anthropogenic activities continue to emit potential greenhouse gases (GHG) into the atmosphere leading to a warmer climate over the earth. Predicting the impacts of climate change (CC) on food and fiber production systems in the future is essential for devising adaptations to sustain production and environmental quality. We used the CSM-CROPGRO-cotton v4.6 module within the RZWQM2 model for predicting the possible impacts of CC on cotton (Gossypium hirsutum) production systems in the lower Mississippi Delta (MS Delta) region of the USA. The CC scenarios were based on an ensemble of climate projections of multiple GCMs (Global Climate Models/General Circulation Models) for climate change under the CMIP5 (Climate Model Inter-comparison and Improvement Program 5) program, that were bias-corrected and spatially downscaled (BCSD) at Stoneville location in the MS Delta for the years 2050 and 2080. Four Representative Concentration Pathways (RCP) drove these CC projections: 2.6, 4.5, 6.0, and 8.5 (these numbers refer to radiative forcing levels in the atmosphere of 2.6, 4.5, 6.0, and 8.5 W·m−2), representing the increasing levels of the greenhouse gas (GHG) emission scenarios for the future, as used in the Intergovernmental Panel on Climate Change-Fifth Assessment Report (IPCC-AR5). The cotton model within RZWQM2, calibrated and validated for simulating cotton production at Stoneville, was used for simulating production under these CC scenarios. Under irrigated conditions, cotton yields increased significantly under the CC scenarios driven by the low to moderate emission levels of RCP 2.6, 4.5, and 6.0 in years 2050 and 2080, but under the highest emission scenario of RCP 8.5, the cotton yield increased in 2050 but declined significantly in year 2080. Under rainfed conditions, the yield declined in both 2050 and 2080 under all four RCP scenarios; however, the yield still increased when enough rainfall was received to meet the water requirements of the crop (in about 25% of the cases). As an adaptation measure, planting cotton six weeks earlier than the normal (historical average) planting date, in general, was found to boost irrigated cotton yields and compensate for the lost yields in all the CC scenarios. This early planting strategy only partially compensated for the rainfed cotton yield losses under all the CC scenarios, however, supplemental irrigations up to 10 cm compensated for all the yield losses. View Full-Text
Keywords: climate change; cotton; impacts and adaptations; agricultural systems climate change; cotton; impacts and adaptations; agricultural systems
►▼ Show Figures 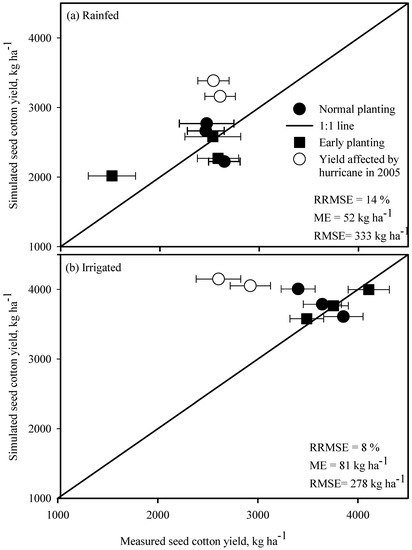