As it is difficult to conduct tests for various soil types and conditions in the field, a laboratory test set-up was developed to allow the investigation of the signal attenuation for a range of soil types and water contents. Several aspects need to be considered in the design of the test bed used to measure the signal attenuation in the laboratory to avoid negative/unwanted effects on the tests and ensure reliability of the measurements. The following are the main aspects which were considered for development of the test setup: (1) Pathway of RF signal in soil sample; (2) Soil container shape and geometry; (3) Elimination of the environmental interferences (i.e., reflection of signal); (4) Soil composition and compaction methods; (5) Measurement techniques.
The ideal setup for RF attenuation tests would be to have an infinitely large container to remove any effect from the container on the measurements. However, this is not practical, as preparation of soil samples for a large container would not be feasible. Initially, a plastic container was selected for the purpose of the tests. However, initial tests showed that environmental EMI (Electromagnetic interference) contaminations adversely affected the readings. Therefore, for the purpose of these tests, an aluminium container with dimensions of 60 cm (length) × 10 cm (diameter) was chosen as the sample mould for measuring the EM signal strength along specific distances (Figure 2). Six holes were placed along the container at 10 cm apart from each other for signal measurement. The container was designed to have five measurement points including the last position at 50 cm. However, after initial testing it was observed that at the data from the 50 cm point was contaminated by the environmental interferences. This was caused by less shielding and soil at the end of the container and therefore, external signals could affect the signals more easily. Due to the inconsistencies in the data, although measurements were taken at this point, they were not included in the paper. A cylindrical shape was used for the container in order to ensure a maximum contact between the compaction rammer (4.5 kg rammer with the diameter of 10 cm) and soil surface at the edges of the container (avoiding sharp corners which the rammer cannot get to). In addition, a diameter of 10 cm was selected for the container based on the size of the rammer used for compaction the soil sample.
The soil used in this experiment was a mixture of Leighton Buzzard Sand and English China Clay with three different gravimetric water contents, 10%, 20% and 30%. The mixing and compaction of the samples as well as gravimetric water content (GWC) determination were carried out based on the British Standard [18]. The prepared soil sample was placed in the container and the signal strength was measured at certain distances (holes along the container) from the transmitter. For the purpose of these tests three separate soil samples were prepared for each soil condition and the measurements were repeated five times at each location (total of 15 samples for each location and soil condition). The logarithmic averages of these measurements were then calculated and used for the comparison. The soil was changed between each set of measurements (three soil samples for each condition) in addition, the delay between measurements at each location was minimised in order to avoid changes in soil condition and homogeneousness to affect the results. Due to the large attenuation of RF signals in soil higher frequency Industrial, Scientific and Medical (ISM) bands (i.e., 2.4 GHz) are not used in underground Wireless System Networks (WSNs). 434 MHz is one of the most commonly used ISM band for long range WSNs and was selected for the purpose of this research. The transmitter node used in this research was a previously developed 434 MHz node for underground WSN with a bandwidth of 150KHz (Frequency Shift Keying, FSK modulation). The transmitter output power was fixed at 10 dBm for all tests. A signal spectrum analyser (PSA 2702 RF) was used to measure the signal intensity at specific positions. The frequency range of the spectrum analyser was approximately from 1 MHz to 2700 MHz and has a noise floor limitation of −96 dBm at −20 dBm reference level. A 434 MHz isotropic Omnidirectional quarter wavelength antenna was used in this experiment as a full wavelength antenna could not be placed in the container due to size limitations. The frequency used in these trials was 434 MHz and the distance between the holes was calculated based on the near-field and far-field radiation to avoid the near-field radiation effect of the signal transmission [19].
After some initial signal transmission tests, it was discovered that the difference between the permittivity of the materials (soil and container) caused the signals to be reflected (at the container and soil boundary) back into the container resulting in a wave guide action causing inconsistent measurements. In order to limit the effect of the container acting as a wave guide, it was earthed to the ground to cancel eddy current effects that were generated on the wall of the container. Results from the metallic container with the earth connection appeared to be consistent and not affected by the reflection and waveguide effect. Figure 3 shows the final setup for the container.
To ensure that the comparison of the models was justified, identical soil permittivities were used as an input for both models. The Peplinski mixing model and the CRIM model were not used to determine the complex permittivity. Rather, the real and imaginary parts of the complex permittivity of the soil, used in the simulations, were determined from Time Domain Reflectometry measurements using the Topp model [11]. Topp [11,20] have shown that the difference between the dielectric permittivity by these different methods is within 3 to 40 for the change of the volumetric water content (VWC) ranged 0 to 0.55. This complex permittivity was then used as an input into both the modified-Friis and the CRIM-Fresnel models to estimate signal attenuation for comparison with the measured values of the signal attenuation along the 10 to 50 cm path. The comparison between the models and the measured results is described in the next section.

The two main models of estimation of attenuation in soil were described and compared with each other. These comparisons showed a large difference between the estimation values of the modified-Friis and CRIM-Fresnel models. The difference between the two models is largely caused by the method that these models were based on. Both models were developed based on limited soil samples and both are semi-empirical models. They also used different mixing models for estimation of soil properties during the development of the RF attenuation models (Peplinski mixing model is used in Modified-Friis and CRIM mixing model is used in the CRIM Fresnel model), which further contributes towards the difference between these models. These differences showed a need for further investigation into the accuracy of these models through comparison of the estimated values with actual measured values from laboratory or field trials in varied soil conditions and compositions. A laboratory test setup for measurements of signal attenuation in soil was developed. Signal attenuation at 434 MHz was measured at five different soil compositions and three different moisture contents. Results from these measurements were compared with the estimated values provided by modified-Friis and CRIM-Fresnel models. These comparisons showed that in soils with higher permittivity value (i.e., higher water content/higher clay content) the modified-Friis model provided a more accurate estimation compared to the CRIM-Fresnel model. In contrast, the results from these investigations showed the CRIM-Fresnel model has a higher accuracy in estimation of attenuation in soils with lower permittivity.
This paper only investigates the attenuation of signal in five different soil compositions at three gravimetric water contents. Therefore, more tests on different soil compositions and conditions are required to fully validate the findings. More varied soil types and conditions are currently being investigated as a part of this research and research on the effect of soil parameters on attenuation and accuracy of the models is ongoing. Furthermore, investigation of the accuracy of these models in different frequency bands can also be helpful in applications were higher frequencies are used (i.e., Ground Penetrating Radar, GPR). 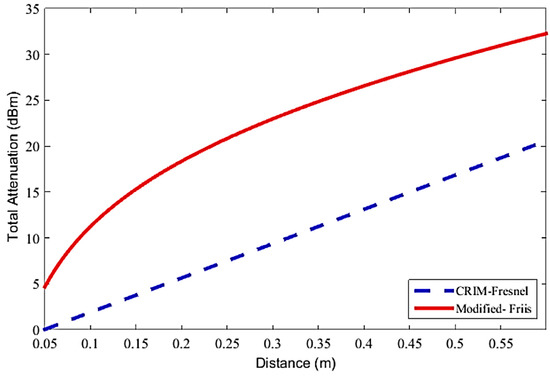 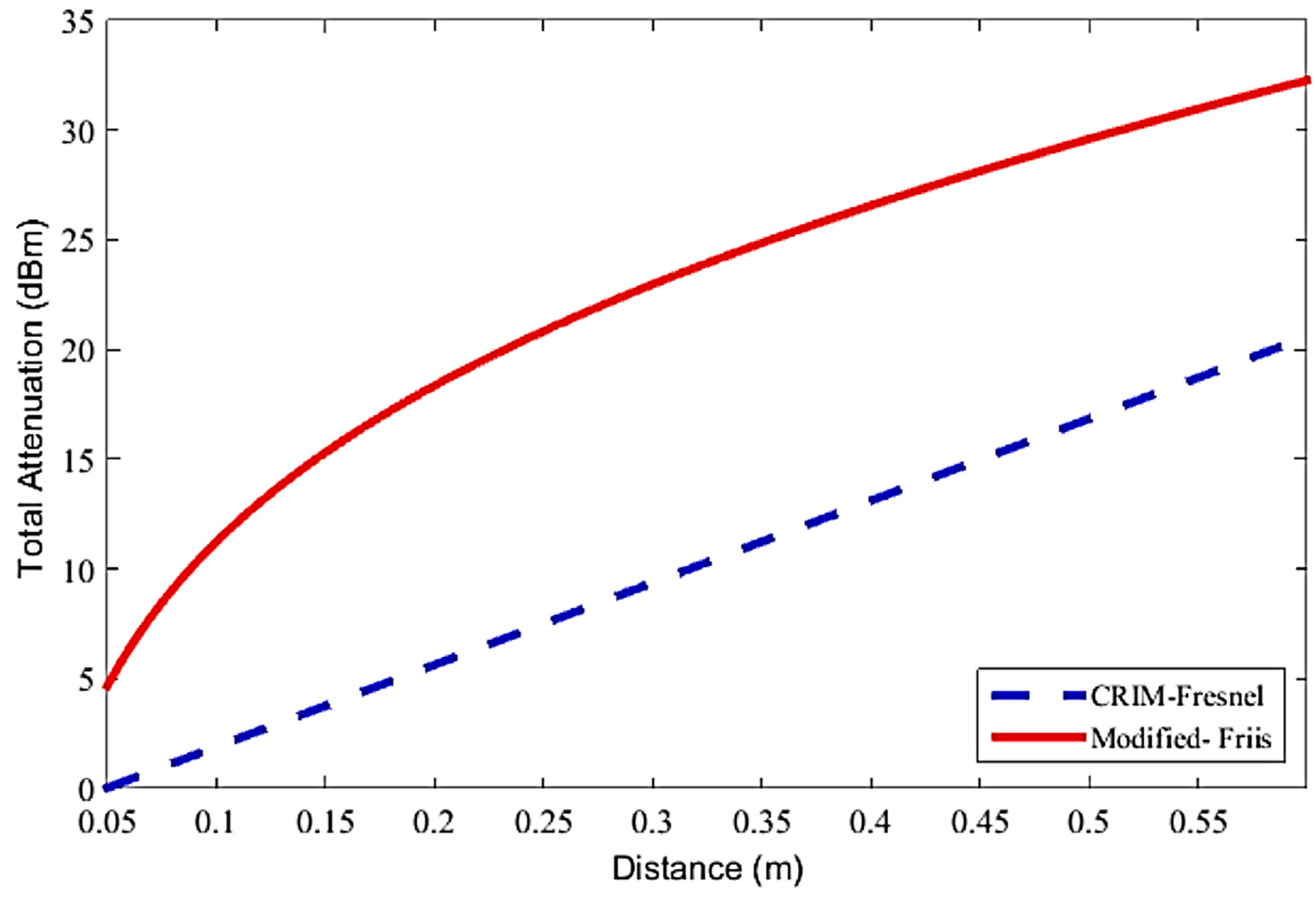 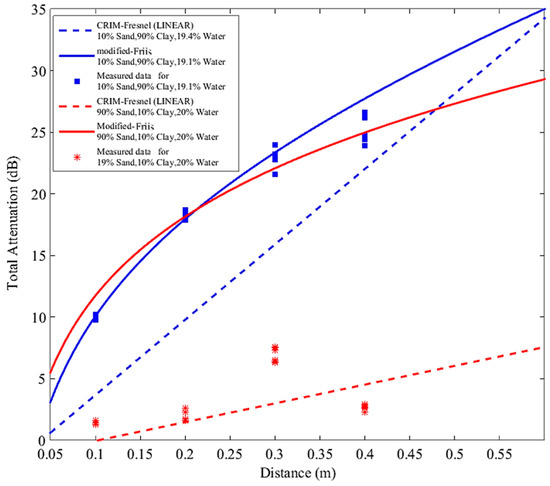 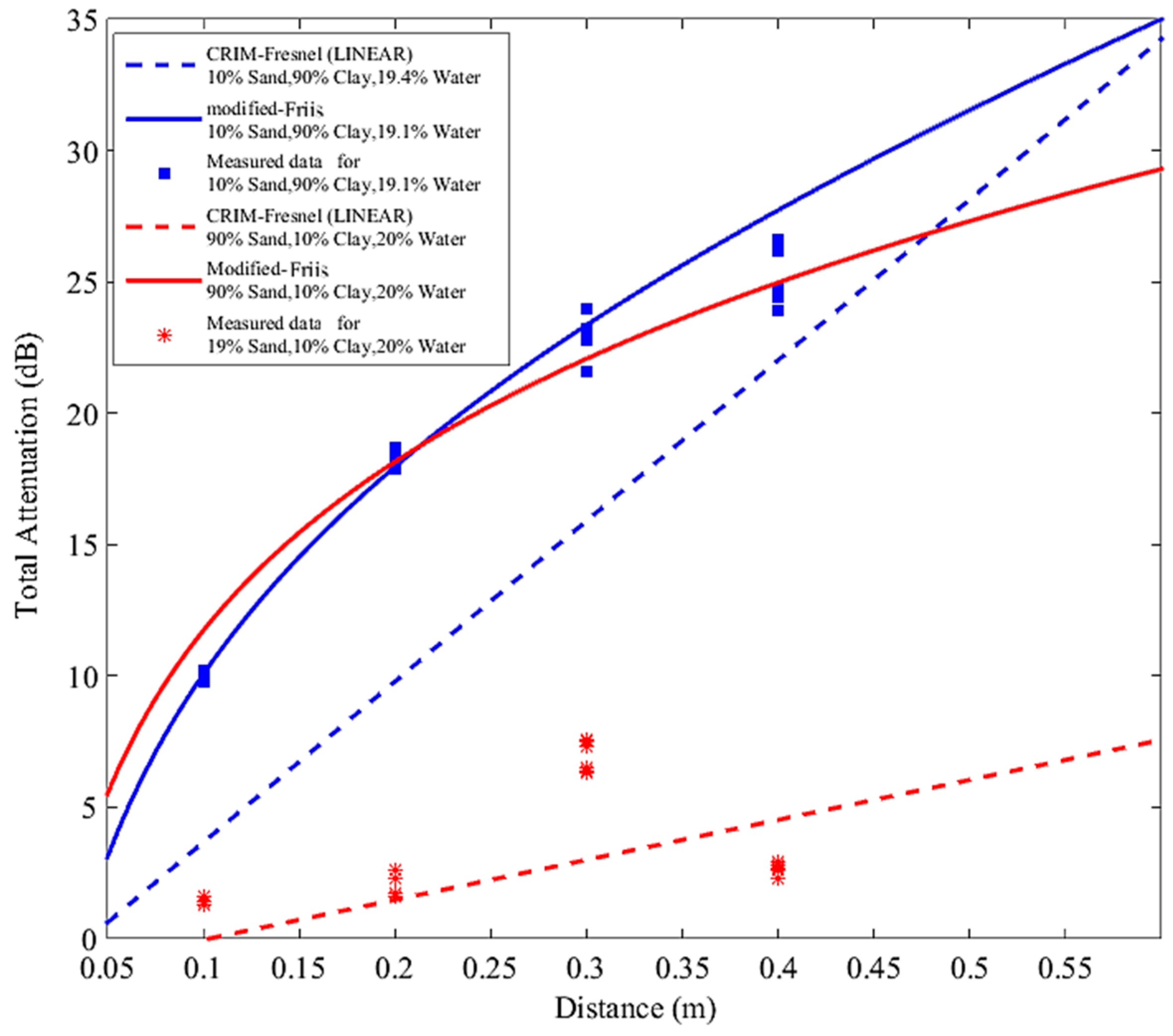 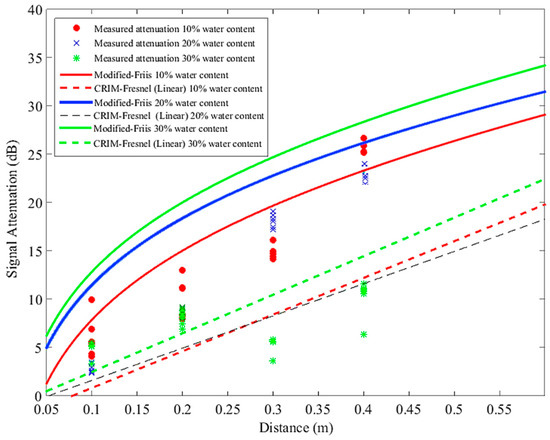