Accumulation of arsenic (As) in soils is increasing consistently day-by-day, which has resulted in increased toxicity of this element in various crop plants. Arsenic interferes with several plant metabolic processes at molecular, biochemical and physiological levels, which result in reduced plant productivity. Hence, the introduction of novel ameliorating agents to combat this situation is the need of the hour. The present study was designed to examine the effect of zinc oxide nanoparticles (ZnO–NPs) in As-stressed soybean plants. Various plant growth factors and enzymes were studied at varying concentrations of As and ZnO–NPs. Our results showed that with the application of ZnO–NPs, As concentration declined in both root and shoot of soybean plants. The lengths of shoot and root, net photosynthetic rate, transpiration, stomatal conductance, photochemical yield and other factors declined with an increase in external As level. However, the application of ZnO–NPs to the As-stressed soybean plants resulted in a considerable increase in these factors. Moreover, the enzymes involved in the ascorbate–glutathione cycle including superoxide dismutase (SOD), catalase (CAT), ascorbate peroxidase (APX) and glutathione reductase (GR) showed a significant increase in their activity with the application of ZnO–NPs to the As-stressed plants. Hence, our study confirms the significance of ZnO–NPs in alleviating the toxicity of As in soybean plants. View Full-Text
Keywords: arsenic stress; soybean; growth; antioxidant enzymes; ascorbate–glutathione cycle; glyoxalase system arsenic stress; soybean; growth; antioxidant enzymes; ascorbate–glutathione cycle; glyoxalase system
►▼ Show Figures 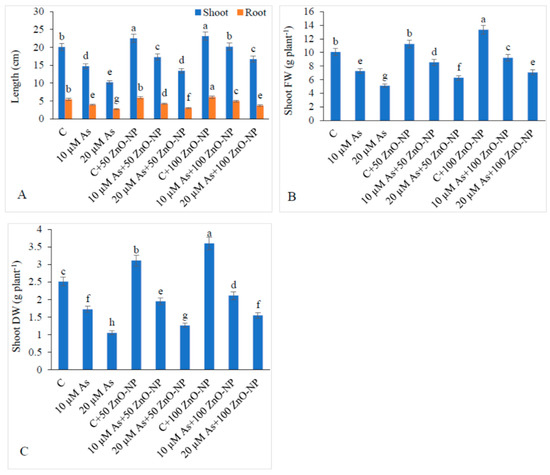