Barley yellow dwarf virus (BYDV) causes an often-devastating disease of cereals that is most effectively controlled by using plant genotypes that are resistant or tolerant to the virus. New barley lines Vir8:3 and Vir13:8, with pyramided resistance genes against different pathogens and resistance gene Ryd2 against BYDV, are currently being tested. Because microRNAs (miRNAs) are associated with antiviral plant defense, here we compared the miRNA profiles in these lines and in cultivar Wysor (carrying one resistance gene, Ryd2), with and without BYDV infection and after feeding by virus-free aphids, to determine whether the miRNA profile in the resistant variety bear similarities with the newly developed lines. The BYDV titer for each group was also determined and compared to the titer in sensitive cultivar Graciosa. Among 746 miRNAs identified in barley, 66 were known miRNAs, and 680 were novel. The expression of 73 miRNAs differed significantly after BYDV infection, including the strong, specific upregulation of novel miRNA10778 that was conserved across all the barley genotypes. This miRNA belongs to the H box and ACA box (H/ACA) snoR14 family of RNAs (Rf01280) and is associated with pseudourydilation. The expression of 48 miRNAs also differed depending on the barley genotype. The profile of miRNAs expressed in Vir8:3 and Vir13:8 in response to BYDV was similar and differed from that of Wysor. Insights into the expression patterns of miRNAs in response to BYDV in barley provided here will benefit further studies toward understanding the resistance mechanisms and developing novel strategies against virus infections. View Full-Text
Keywords: BYDV; NGS; sequencing; sRNA; miRNA; Ryd2 BYDV; NGS; sequencing; sRNA; miRNA; Ryd2
►▼ Show Figures 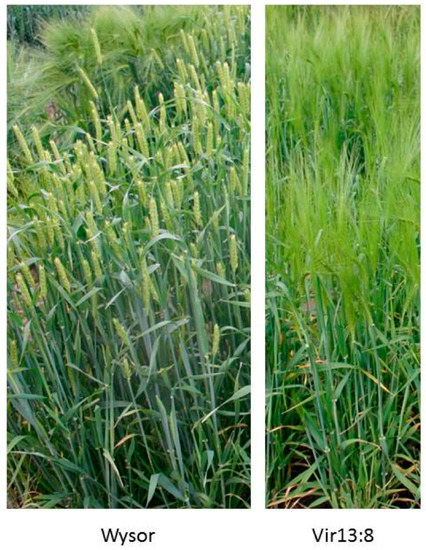