Paphiopedilum delenatii is a native orchid of Vietnam with highly attractive floral traits. Unfortunately, it is now listed as a critically endangered species with a few hundred individuals remaining in nature. In this study, we performed next-generation sequencing of P. delenatii and assembled its complete chloroplast genome. The whole chloroplast genome of P. delenatii was 160,955 bp in size, 35.6% of which was GC content, and exhibited typical quadripartite structure of plastid genomes with four distinct regions, including the large and small single-copy regions and a pair of inverted repeat regions. There were, in total, 130 genes annotated in the genome: 77 coding genes, 39 tRNA genes, 8 rRNA genes, and 6 pseudogenes. The loss of ndh genes and variation in inverted repeat (IR) boundaries as well as data of simple sequence repeats (SSRs) and divergent hotspots provided useful information for identification applications and phylogenetic studies of Paphiopedilum species. Whole chloroplast genomes could be used as an effective super barcode for species identification or for developing other identification markers, which subsequently serves the conservation of Paphiopedilum species. View Full-Text
Keywords: Paphiopedilum; chloroplast genome; comparative genomics; conservation genomics Paphiopedilum; chloroplast genome; comparative genomics; conservation genomics
►▼ Show Figures 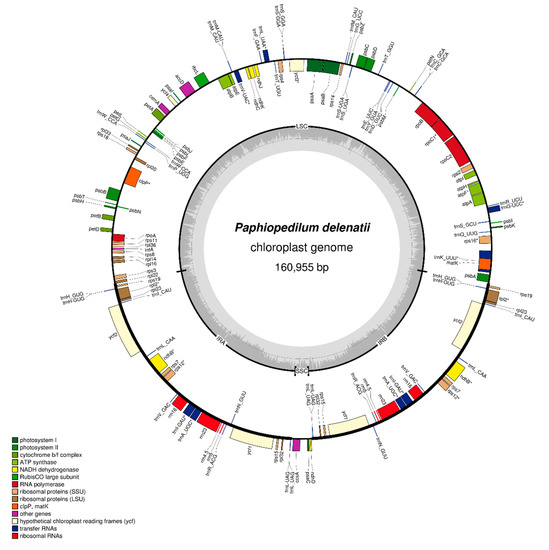