For floral induction in adult citrus, low temperature is one of the most important environmental factors. FLOWERING LOCUS C (FLC) plays a very important role in low-temperature-induced Arabidopsis flowering by repressed FLC expression under exposure to prolonged low-temperature conditions. However, little is known about the FLC regulation mechanism in perennial woody plants such as citrus. In this study, the functions of citrus FLC homolog (PtFLC) were investigated by ectopic expression in Arabidopsis. Transcription factor of homeodomain leucine zipper I (HD-ZIP I) as an upstream regulator of PtFLC was identified by yeast one-hybrid screen to regulate its transcription. The HD-ZIP I transcription factor was highly homologous to Arabidopsis ATHB13 and thus was named PtHB13. Ectopically expressed PtHB13 inhibited flowering in transgenic Arabidopsis. Furthermore, the expression of PtFLC and PtHB13 showed a seasonal change during the floral induction period and was also affected by low temperature. Thus, we propose that PtHB13 binds to PtFLC promoter to regulate its activity during the citrus floral induction process. View Full-Text
Keywords: citrus; flowering; FLC; FT; low temperature citrus; flowering; FLC; FT; low temperature
►▼ Show Figures 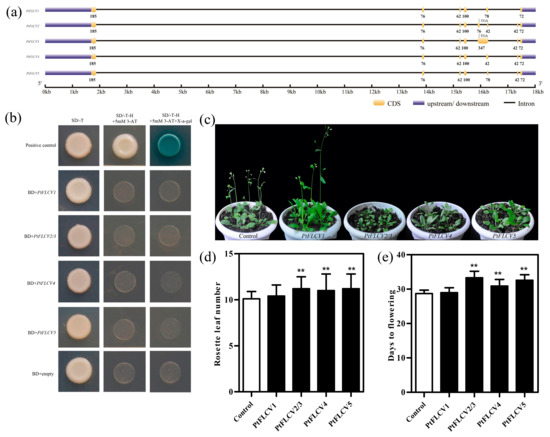