Phenolic Compounds as Unambiguous Chemical Markers for the Identification of Keystone Plant Species in the Bale Mountains, Ethiopia

Inactivation of ADP-glucose pyrophosphorylase1 (ADG1) causes a starchless phenotype in Arabidopsis. Mutants defective in ADG1 show severe growth retardation in day/night conditions but exhibit similar growth to wild type under continuous light, implying that starch plays an important role in supporting respiration, metabolism and growth at night. In addition to carbohydrates, lipids and proteins can serve as alternative respiratory substrates for the energy production in mature plants. To test the role of lipids in plant growth, we generated transgenic plants overexpressing phospholipid:diacylglycerol acyltransferase1 (PDAT1) in adg1. We found that PDAT1 overexpression caused an increase in both fatty acid synthesis and turnover and increased the accumulation of triacylglycerol (TAG) at the expense of sugars, and enhanced the growth of adg1. We demonstrated that unlike sugars, which were metabolized within a few hours of darkness, TAG breakdown was slow, occurring throughout the entire dark period. The slow pace of TAG hydrolysis provided a sustained supply of fatty acids for energy production, thereby alleviating energy deficiency at night and thereby improving the growth of the starchless mutants. We conclude that lipids can contribute to plant growth by providing a constant supply of fatty acids as an alternative energy source in mature starchless mutant plants. View Full-Text
Keywords: starch; sugars; lipids; triacylglycerol; phospholipid:diacylglycerol acyltransferase1 starch; sugars; lipids; triacylglycerol; phospholipid:diacylglycerol acyltransferase1
►▼ Show Figures 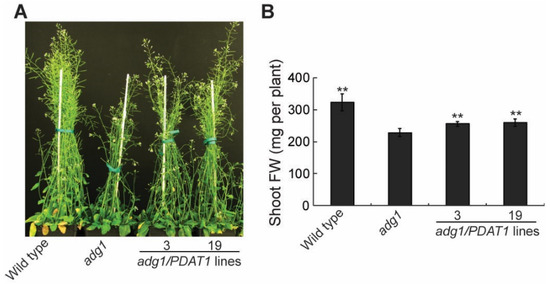