Multi-Target β-Protease Inhibitors from Andrographis paniculata: In Silico and In Vitro Studies
Previous Article in Journal

In this research, seven different models to predict leaf area (LA) of loquat (Eriobotrya japonica Lindl) were tested and evaluated. This species was chosen due to the relevant importance of its fruit as an appreciated early summer product and of its leaves and flower as a source of additional income within the nutraceutical and functional food markets. The analysis (calibration and validation) was made using a large dataset (2190) of leaf width (W), leaf length (L), and single LA collected in ten common loquat cultivars. During the analysis, the results obtained using one- and two-regressor models were also evaluated to assess the need for fast measurements against different levels of accuracy achieved during the final estimate. The analysis permitted to finally select two different models: 1) a model based on a single measurement and quadratic relationship between the single LA and W (R2 = 0.894; root mean squared error [RMSE] = 12.98) and another model 2) based, instead, on two measurements (L and W), and on the linear relationship between single LA and the product of L × W (R2 = 0.980; RMSE = 5.61). Both models were finally validated with an independent dataset (cultivar ‘Tanaka’) confirming the quality of fitting and accuracy already observed during the calibration phase. The analysis permitted to select two different models to be used according to the aims and accuracy required by the analysis. One, based on a single-regressor quadratic model and W (rather than L) as a proxy variable, is capable of obtaining a good quality of fitting of the single LA of loquat cultivars (R2 = 0.894; RMSE = 12.98), whereas, the other, a linear two-regressor (i.e., W and L) model, permitted to achieve the highest prediction (R2 = 0.980; RMSE = 5.61) of the observed variable, but double the time required for leaf measurement. View Full-Text
Keywords: Indirect measurement; plant phenotyping; leaf shape; model calibration; bootstrap; validation Indirect measurement; plant phenotyping; leaf shape; model calibration; bootstrap; validation
►▼ Show Figures 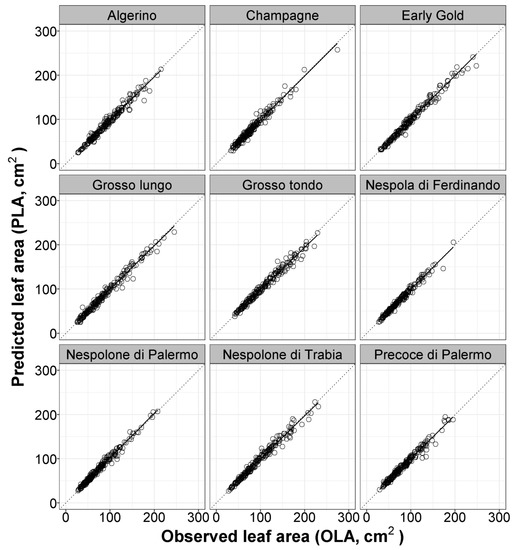