Phenolic Compounds as Unambiguous Chemical Markers for the Identification of Keystone Plant Species in the Bale Mountains, Ethiopia

Despite the fact that the vegetation pattern and history of the Bale Mountains in Ethiopia were reconstructed using pollen, little is known about the former extent of Erica species. The main objective of the present study is to identify unambiguous chemical proxies from plant-derived phenolic compounds to characterize Erica and other keystone species. Mild alkaline CuO oxidation has been used to extract sixteen phenolic compounds. After removal of undesired impurities, individual phenols were separated by gas chromatography and were detected by mass spectrometry. While conventional phenol ratios such as syringyl vs. vanillyl and cinnamyl vs. vanillyl and hierarchical cluster analysis of phenols failed for unambiguous Erica identification, the relative abundance of coumaryl phenols (>0.20) and benzoic acids (0.05—0.12) can be used as a proxy to distinguish Erica from other plant species. Moreover, a Random Forest decision tree based on syringyl phenols, benzoic acids (>0.06), coumaryl phenols (<0.21), hydroxybenzoic acids, and vanillyl phenols (>0.3) could be established for unambiguous Erica identification. In conclusion, serious caution should be given before interpreting this calibration study in paleovegetation reconstruction in respect of degradation and underground inputs of soil organic matter. View Full-Text
Keywords: paleoclimate; pollen; paleovegetation; oxidation; phenols; Erica; biomarkers; machine learning paleoclimate; pollen; paleovegetation; oxidation; phenols; Erica; biomarkers; machine learning
►▼ Show Figures 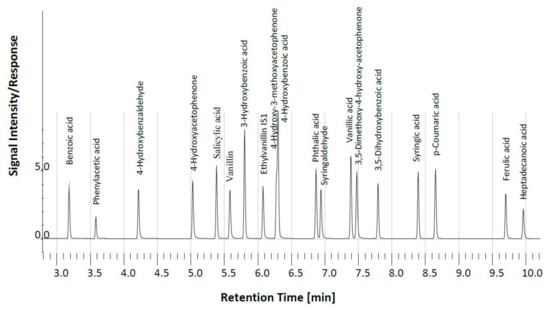