(1) Background: The study analyzed wheat morphological traits to assess the role of roots structure in the tolerance of drought and to recognize the mechanisms of root structure adjustment to dry soil environment. (2) Methods: Root-box and root-basket methods were applied to maintain an intact root system for analysis. (3) Results: Phenotypic differences among six genotypes with variable drought susceptibility index were found. Under drought, the resistant genotypes lowered their shoot-to-root ratio. Dry matter, number, length, and diameter of nodal and lateral roots were higher in drought-tolerant genotypes than in sensitive ones. The differences in the surface area of the roots were greater in the upper parts of the root system (in the soil layer between 0 and 15 cm) and resulted from the growth of roots of the tolerant plant at an angle of 0–30° and 30–60°. (4) Conclusions: Regulation of root bending in a more downward direction can be important but is not a priority in avoiding drought effects by tolerant plants. If this trait is reduced and accompanied by restricted root development in the upper part of the soil, it becomes a critical factor promoting plant sensitivity to water-limiting conditions. View Full-Text
Keywords: drought; morphological traits; root system structure; root box—pin board methods; root-basket methods; spring wheat drought; morphological traits; root system structure; root box—pin board methods; root-basket methods; spring wheat
►▼ Show Figures 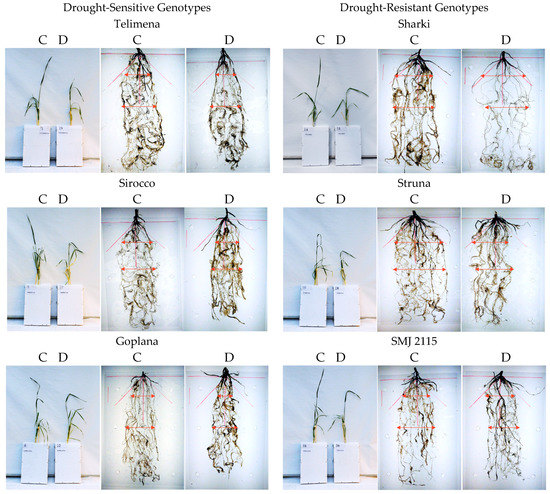