The inheritance and causal loci for resistance to blackleg, a devastating disease of Brassicaceous crops, are yet to be known in cabbage (Brassica oleracea L.). Here, we report the pattern of inheritance and linked molecular marker for this trait. A segregating BC1 population consisting of 253 plants was raised from resistant and susceptible parents, L29 (♀) and L16 (♂), respectively. Cotyledon resistance bioassay of BC1 population, measured based on a scale of 0–9 at 12 days after inoculation with Leptosphaeria maculans isolate 03–02 s, revealed the segregation of resistance and ratio, indicative of dominant monogenic control of the trait. Investigation of potential polymorphism in the previously identified differentially expressed genes within the collinear region of ‘B. napus blackleg resistant loci Rlm1′ in B. oleracea identified two insertion/deletion (InDel) mutations in the intron and numerous single nucleotide polymorphisms (SNPs) throughout the LRR-RLK gene Bol040029, of which six SNPs in the first exon caused the loss of two LRR domains in the susceptible line. An InDel marker, BLR-C-InDel based on the InDel mutations, and a high resolution melting (HRM) marker, BLR-C-2808 based on the SNP C2808T in the second exon were developed, which predicated the resistance status of the BC1 population with 80.24%, and of 24 commercial inbred lines with 100% detection accuracy. This is the first report of inheritance and molecular markers linked with blackleg resistance in cabbage. This study will enhance our understanding of the trait, and will be helpful in marker assisted breeding aiming at developing resistant cabbage varieties. View Full-Text
Keywords: bioassay; blackleg; cabbage; disease resistance; high resolution melting (HRM); InDel; LRR-RLK gene; marker; PCR bioassay; blackleg; cabbage; disease resistance; high resolution melting (HRM); InDel; LRR-RLK gene; marker; PCR
►▼ Show Figures 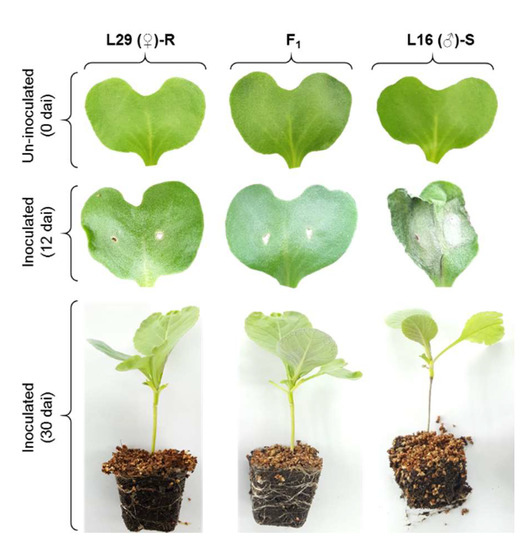