Organogenesis at the Shoot Apical Meristem
Next Article in Special Issue

Should I Eat or Should I Go? Acridid Grasshoppers and Their Novel Host Plants: Potential for Biotic Resistance

The present study aims to identify the diverse endophytic fungi residing in the roots of Dendrobium moniliforme and their role in plant growth and development. Nine endophytic fungi were isolated from the root sections and characterized by molecular technique. Quantification of the indole acetic acid (IAA) compound by these endophytes was done. Further, Chemical profiling of R11 and R13 fungi was done by Gas Chromatography-Mass Spectroscopy (GC-MS). Asymbiotic seed derived protocorms of Rhynchostylis retusa was used for the plant growth assay to investigate the growth promoting activities of the fungal elicitor prepared from the isolated fungi from D. moniliforme. Among the isolated fungi, the relative dominant fungus was Fusarium sp. The R13 and R6 fungi were identified only at the genus level which concludes the fungi are of new species or strain. The indole acetic acid production was relatively higher in R10. Bioactive compound diversity was observed in the organic extract of R11 and R6. The presence of phenolic compound and essential oil suggest their contribution for the antimicrobial and antioxidant properties to their host plant, D. moniliforme. The plant growth assay result concluded, the fungal elicitor prepared from R10, Colletotrichum alatae was the best among all other for the plant growth activities. View Full-Text
Keywords: orchid; Dendrobium moniliforme; endophytes; elicitor; indole acetic acid orchid; Dendrobium moniliforme; endophytes; elicitor; indole acetic acid
►▼ Show Figures 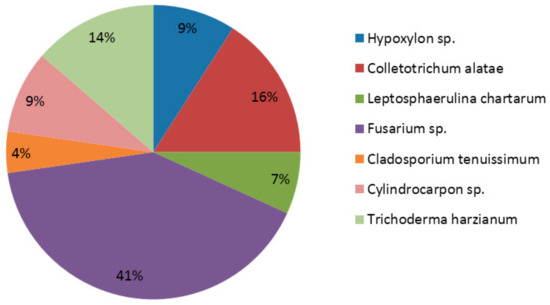