The Cultivation of Chelidonium majus L. Increased the Total Alkaloid Content and Cytotoxic Activity Compared with Those of Wild-Grown Plants

The effect of cultivation practises on both the phytochemical profile and biological activity of aqueous ethanol extracts of Chelidonium majus L. was studied. Extracts were prepared from aerial parts of the same plant population collected in the wild and grown under organic farming conditions. Both qualitative and quantitative analyses of alkaloids and flavonoid derivatives were performed by LC/MS methods, and the cytotoxicity of lyophilised extracts was studied in B16-F10, HepG2, and CaCo-2 cells. Coptisine was the dominant alkaloid of extracts prepared from wild-grown plants, whereas after cultivation, chelidonine was the most abundant alkaloid. The total alkaloid content was significantly increased by cultivation. Ten flavonol glycoconjugates were identified in C. majus extracts, and quantitative analysis did not reveal significant differences between extracts prepared from wild-grown and cultivated specimens. Treatment with C. majus extracts resulted in a dose-dependent increase in cytotoxicity in all three cell lines. The extracts prepared from cultivated specimens showed higher cytotoxicity than the extracts prepared from wild-grown plants. The strongest cytotoxic effect of cultivated C. majus was observed in B16-F10 cells (IC50 = 174.98 ± 1.12 µg/mL). Cultivation-induced differences in the phytochemical composition of C. majus extracts resulted in significant increases in the cytotoxic activities of the preparations. View Full-Text
Keywords: Chelidonium majus; alkaloids; flavonoids; LC/MS analysis; cytotoxic activity Chelidonium majus; alkaloids; flavonoids; LC/MS analysis; cytotoxic activity
►▼ Show Figures 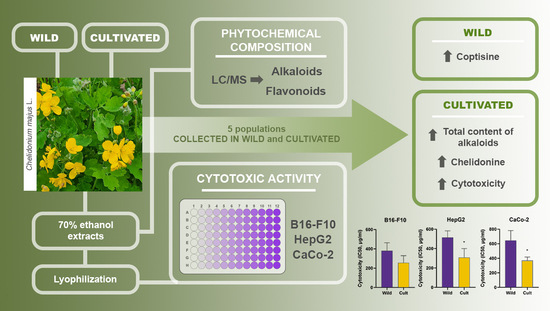