LC-MS/MS Profiles and In Vitro Biological Activities of Extracts of an Endemic Species from Turkey: Stachys cretica ssp. anatolica

Background: Genus Stachys is one of the largest of the Lamiaceae family, having around 300 different plant species inhabiting areas with temperate and warm climates. The Stachys species in Turkey are represented with 81 taxa; 51 of them being endemic. Plants of the Stachys genus have been known for their biological activity and their use in ethnomedicine. Methods: The dominant components of S. cretica ssp. anatolica aqueous and methanol extracts were studied with the LC-MS/MS technique. Results: Chlorogenic acid, apigenin-7-glucoside and verbascoside present as the dominant polyphenols found in studied extracts. The prominent biological activity of the studied S. cretica ssp. anatolica methanol and aqueous extracts showed strong antioxidant activity and inhibition of enzymes tyrosinase and α-amylase, involved in skin disorders and diabetes mellitus type II. Conclusions: This study has proven that the aqueous and methanol extracts of S. cretica ssp. anatolica have prominent antioxidant activity, due to a high abundance of polyphenols. The strong antioxidant properties of S. cretica ssp. anatolica extracts show promising application for the pharmaceutical, food, and cosmetics industries. View Full-Text
Keywords: Stachys; antioxidant; phenolics; flavonoids; LC-MS/MS; tyrosinase; α-amylase Stachys; antioxidant; phenolics; flavonoids; LC-MS/MS; tyrosinase; α-amylase
►▼ Show Figures 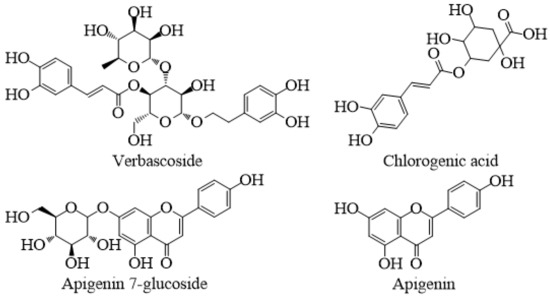