:
Global population growth has increased food production challenges and pushed agricultural systems to deploy the Internet of Things (IoT) instead of using conventional approaches. Controlling the environmental parameters, including light, in greenhouses increases the crop yield; nonetheless, the electricity cost of supplemental lighting can be high, and hence, the importance of applying cost-effective lighting methods arises. In this research paper, a new optimal supplemental lighting approach was developed and implemented in a research greenhouse by adopting IoT technology. The proposed approach minimizes electricity cost by leveraging a Markov-based sunlight prediction, plant light needs, and a variable electricity price profile. Two experimental studies were conducted inside a greenhouse with “Green Towers” lettuce (Lactuca sativa) during winter and spring in Athens, GA, USA. The experimental results showed that compared to a heuristic method that provides light to reach a predetermined threshold at each time step, our strategy reduced the cost by 4.16% and 33.85% during the winter and spring study, respectively. A paired t-test was performed on the growth parameter measurements; it was determined that the two methods did not have different results in terms of growth. In conclusion, the proposed lighting approach reduced electricity cost while maintaining crop growth.
Keywords:
Internet of Things (IoT); optimal control; supplemental lighting in greenhouses; image processing

Photosynthesis is a photon-driven process. Thus, photosynthetic light levels are measured as the photosynthetic photon flux density (PPFD) with units of µmol m s. The PPFD is the light-photon numbers in the photosynthetically active wavelength range (400–700 nm) per square meter per second. The daily light integral (DLI) in mol m d is the integral of the PPFDs over 24 h. To ensure sufficient growth for plants in greenhouses, it is recommended that they receive a minimum amount of DLI during the photoperiod, which is the time period each day (up to 24 h) during which plants receive light [23]. To formulate the optimization problem, the relation between two important parameters in plant photosynthesis was considered. These parameters are the PPFD and electron transport rate (ETR), which is the number of electrons transported through photosystem II per square meter of leaf area per second (with units of µmol m s). The daily photochemical integral (DPI) in mol m d is the integral of the ETRs over 24 h. Furthermore, the ETR and PPFD generally have an exponential rise to a maximum relation. The authors in [23] derived a relationship between the ETR and PPFD as: where a is the asymptote of the ETR and k is the initial slope of the ETR divided by a. For “Green Towers” lettuce, which was used in this study, µmol m s, and [23].
For many greenhouse crops, to guarantee high-quality production and adequate growth, a minimum DLI is suggested. In some cases, a specific photoperiod must also be achieved. However, the DPI and plant growth depend on the combination of the DLI and photoperiod; longer photoperiods with the same DLI result in a higher DPI and more biomass [27,28]. Therefore, the DPI is a better predictor of plant growth and better suited for lighting optimization algorithms than the DLI. “Green Towers” lettuce requires a DPI of 3 mol m d, corresponding approximately to a DLI of 17 mol m d under ambient sunlight conditions [23]. The optimization problem was formulated to minimize the total amount of supplemental lighting cost to reach a specified DPI within a specified photoperiod.
The theory behind the experiments considered in this study is based on the constrained nonlinear optimization problem presented in [25], which is as follows: where is the ETR resulting from supplemental light provided by the LEDs at time step t, is the ETR resulting from sunlight, is the PPFD received from the Sun, is the maximum ETR that can be achieved with LEDs, is the electricity price in cents/kWh, is the minimum DPI needed for the plant during the entire photoperiod, m is the length of each time step in seconds, and T is the number of time steps. The first constraint in (1) guarantees supplying sufficient light to the plants to reach the recommended DPI, and the other constraints define the ETR bounds according to the PPFD of LEDs.
A photoperiod of 16 h is common for greenhouse lettuce production and used to illustrate the performance of the control strategy. The optimization problem was solved at each time step (with the length of m seconds) during the allowed photoperiod for each day, and supplemental light was provided up to the optimal PPFD calculated for that time step. The process was repeated every m seconds time step, for a total number of /m when a 16 h photoperiod was used. The Markov-based predictive values are substituted in (1), instead of the actual future sunlight intensities (which are not obtainable in real time). For a detailed description on sunlight prediction using Markov chains, we refer to our previous work [25]. Consequently, (1) can be demonstrated as:
The optimization problem (2) was solved once before sunrise and once after sunset. Throughout the day, (2) was solved repeatedly at each time step. The interested reader is referred to [25] for more details on how to calculate the optimal lighting strategy.

Four essential components of an IoT ecosystem include: (1) IoT devices; (2) communication technology; (3) the Internet; and (4) data storage and processing [3]. The description of each component is provided as follows:

(1)
IoT devices: IoT devices consist of embedded systems, which include microprocessors, field programmable gate arrays (FPGAs), and input/output interfaces that interact with sensors and actuators [3]. In this study, a quantum light sensor was used to measure sunlight irradiance in the greenhouse, and an infrared (IR) night vision camera was deployed to monitor growth and calculate the projected canopy size (PCS) (a morphological indicator of plant growth). A Raspberry Pi was also used as the microprocessor, which was connected to the camera and the light sensor through an analog-to-digital converter (ADC). Data were stored on the Raspberry Pi SD card and then transferred through WiFi. Reliability, portability, security, and cost were taken into account while choosing the IoT devices;
(2)
Communication technology: Communication technology in IoT systems can be categorized based on the standards, spectrum, and application scenarios. In the deployment of wireless connectivity, the range of the communication distance, data rate, security and resilience, and cost of gateway modems are some of the parameters that should be considered [3]. For our study, WiFi was chosen as the wireless technology with a WLAN and WPA2 security;
(3)
Internet: The connection between IoT devices and the Internet allows transferring data towards a remote infrastructure for storage, processing, and further analysis. Security, accessibility, and support for real-time data should be taken into account while transferring data [3];
(4)
Data storage and processing units: Data collected in agriculture applications can be in different forms including images, text, audio, and video. Cloud IoT platforms have been used to store big data collected from sensors. Some of the commercial platforms that provide data storage and analysis are Onfarm systems, Cropx, KAA, Farmx, Easyfarm, and Farmlogs [3]. In our experiment, data in the form of text and images were stored on the Raspberry Pi SD card and retrieved remotely using WPA2 and RealVNC software (RealVNC is available at https://www.realvnc.com/en/, accessed on 20 November 2020).

In this paper, a new optimal approach was developed and implemented for supplemental lighting control in greenhouse environments using IoT technology. This method solves an optimization problem to satisfy plant light needs using Markov-based sunlight prediction and variable electricity pricing. Two experimental studies during two different seasons in the same greenhouse were conducted, where the proposed lighting approach was validated in terms of electricity cost reduction (4.16% reduction during the winter study and 33.85% during the spring study) while maintaining plant growth.

Sunlight data that were used to develop the predictive model are available at https://www.nrel.gov/grid/solar-resource/confrrm.html (accessed on 1 December 2019). The code developed for implementing the lighting strategy can be found here: https://github.com/velnilab/optimal-lighting (released 19 November 2021).

The authors would like to thank Theekshana C. Jayalath for his technical assistance.

The authors declare no conflict of interest. The funders had no role in the design, execution, interpretation, nor writing of the study. 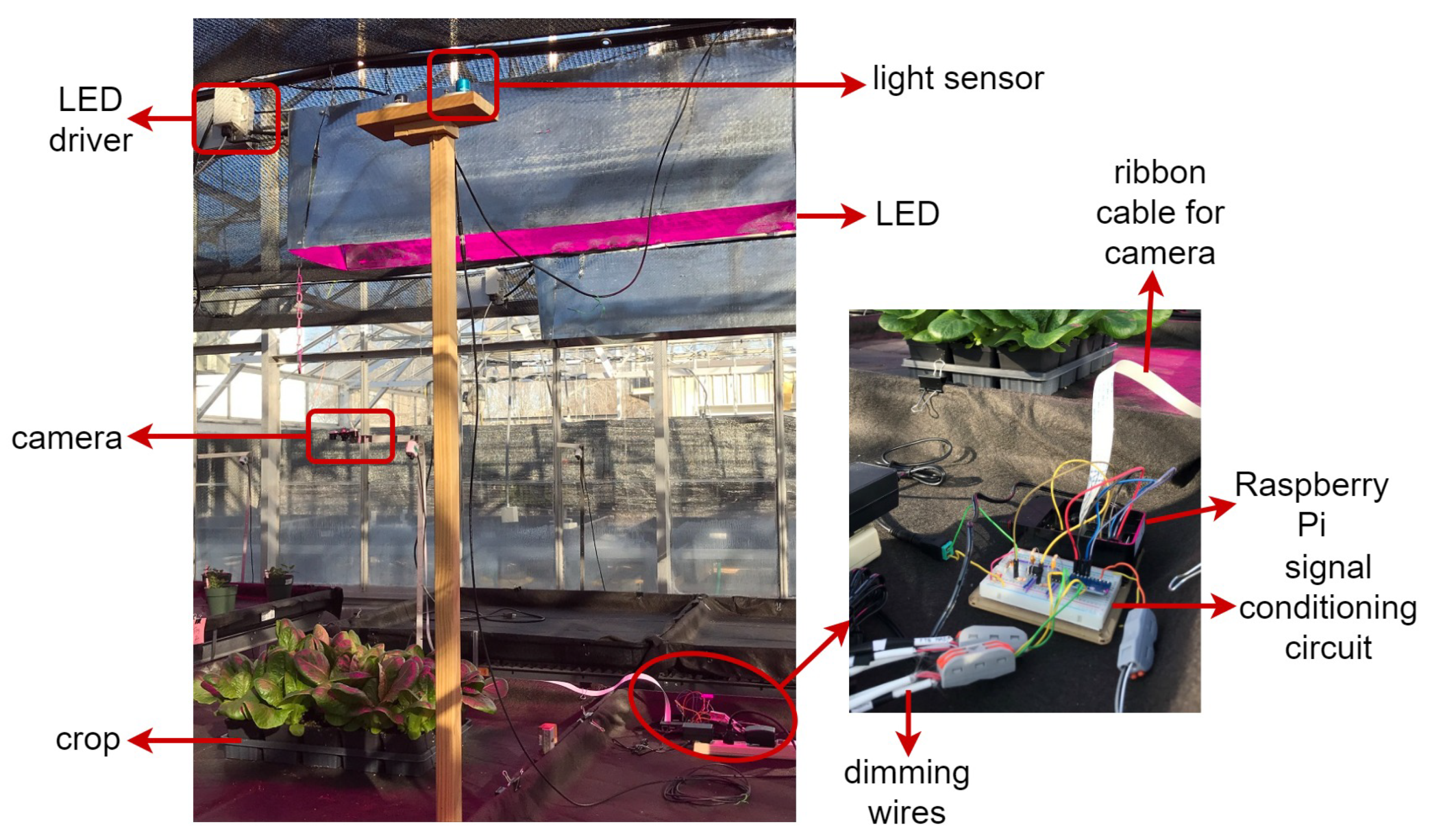 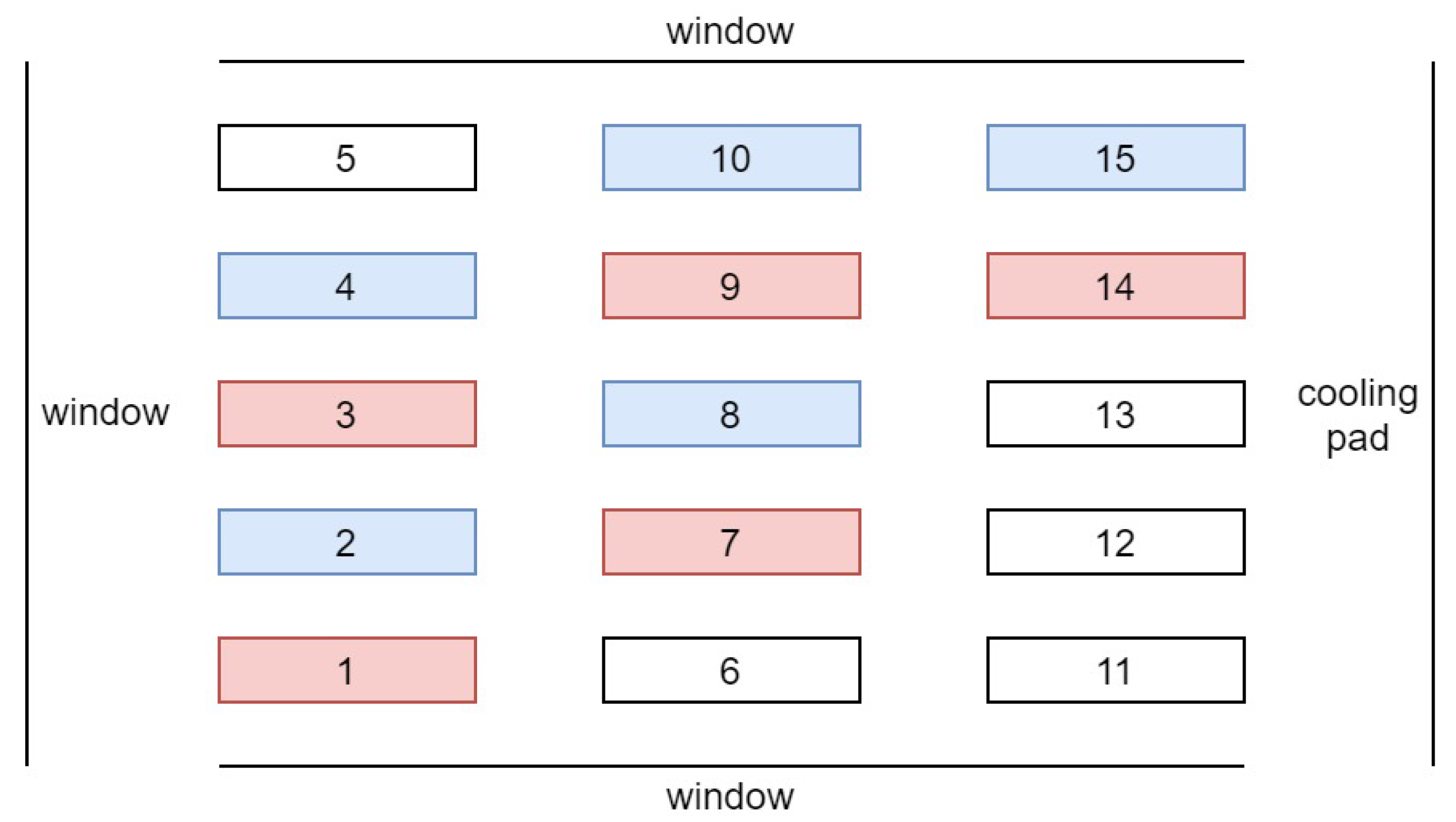 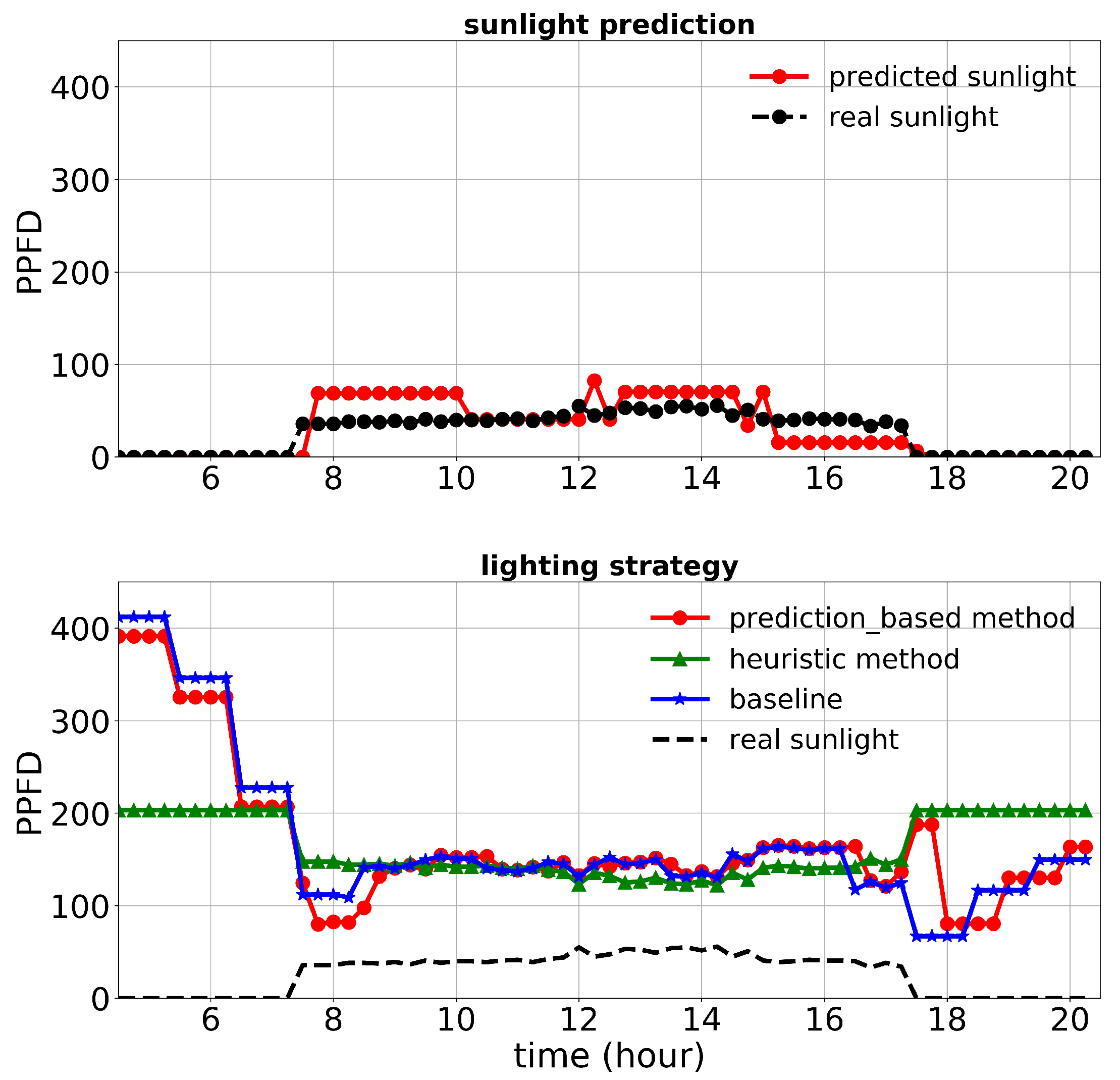 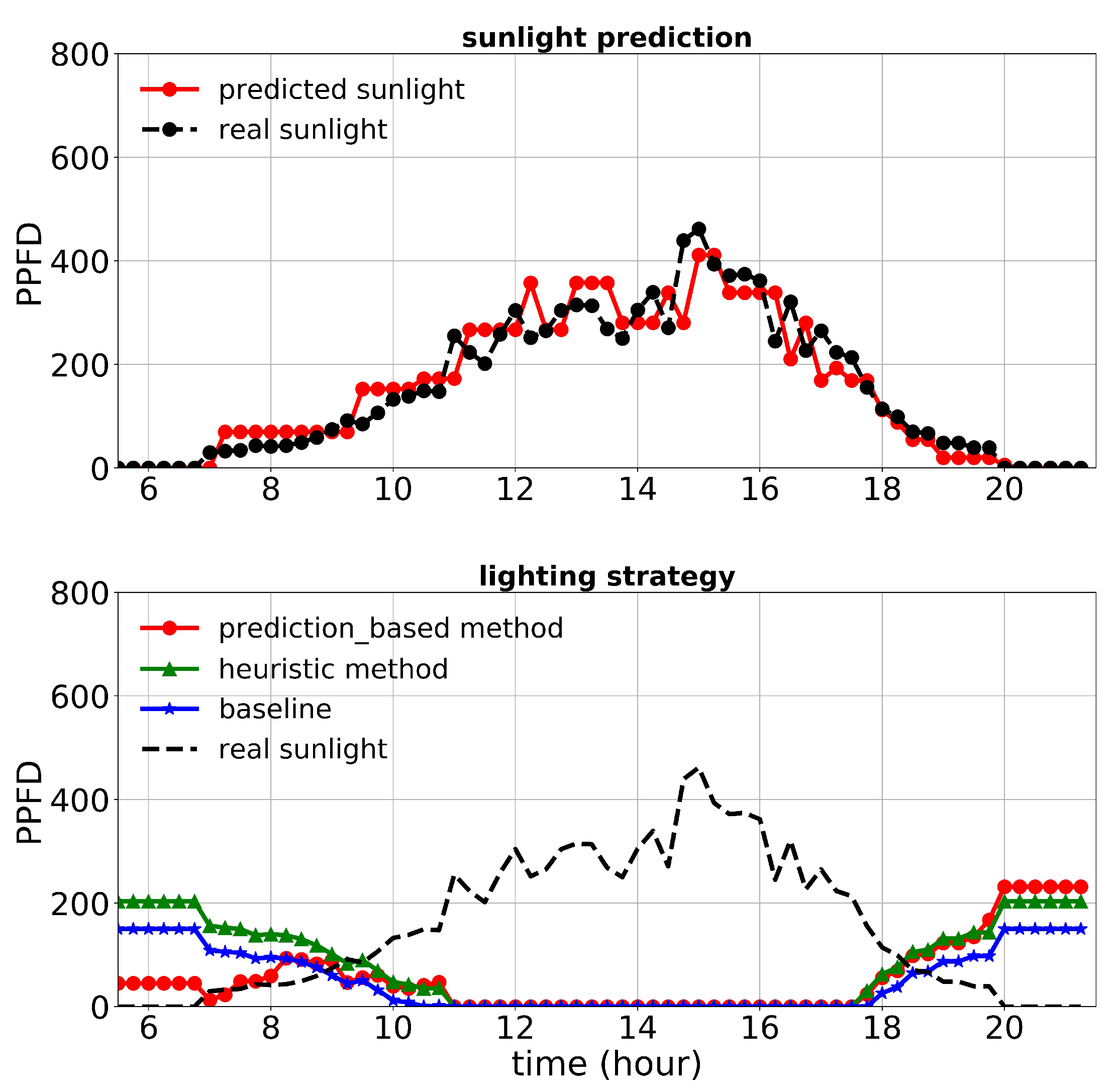 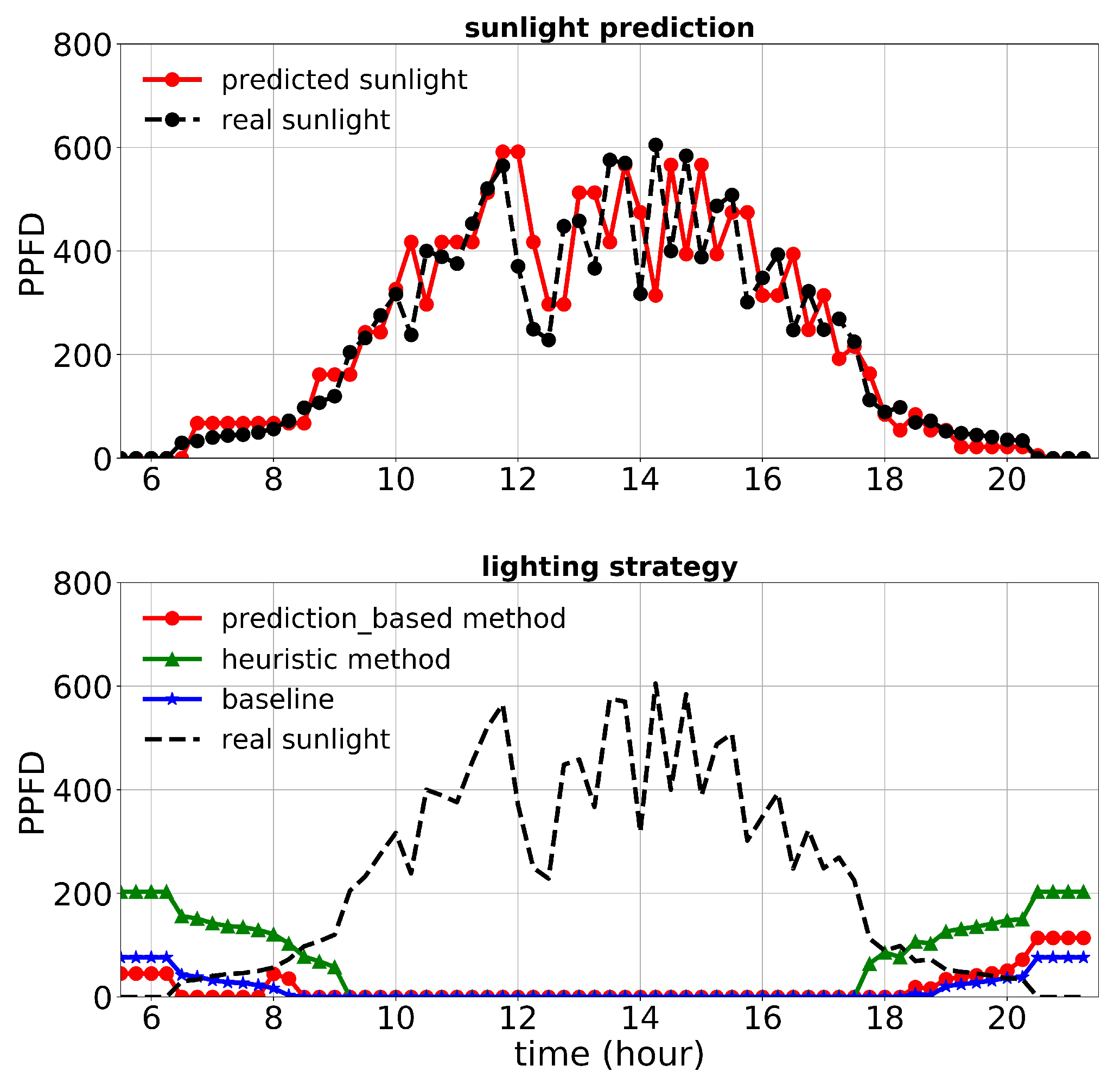 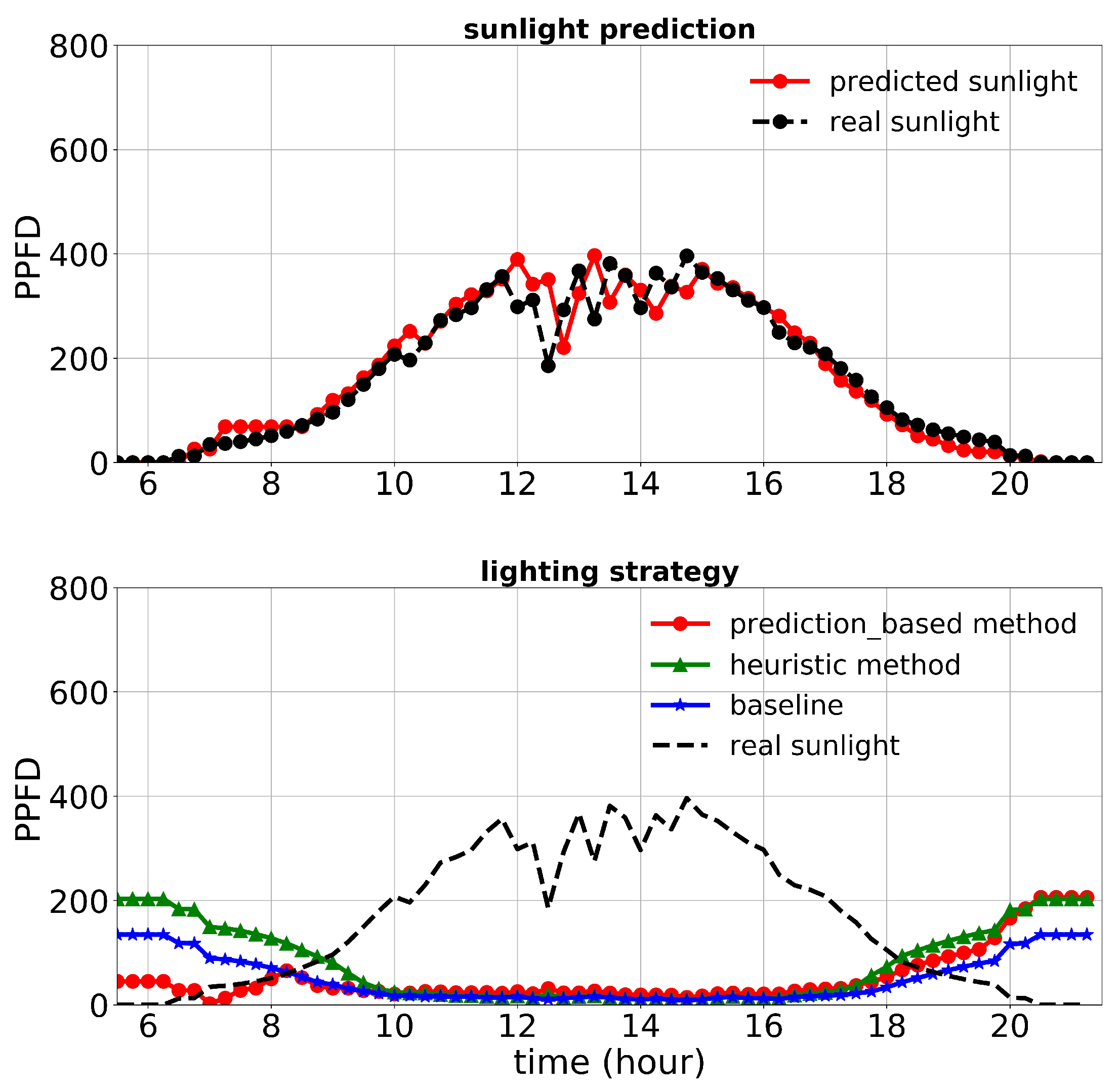 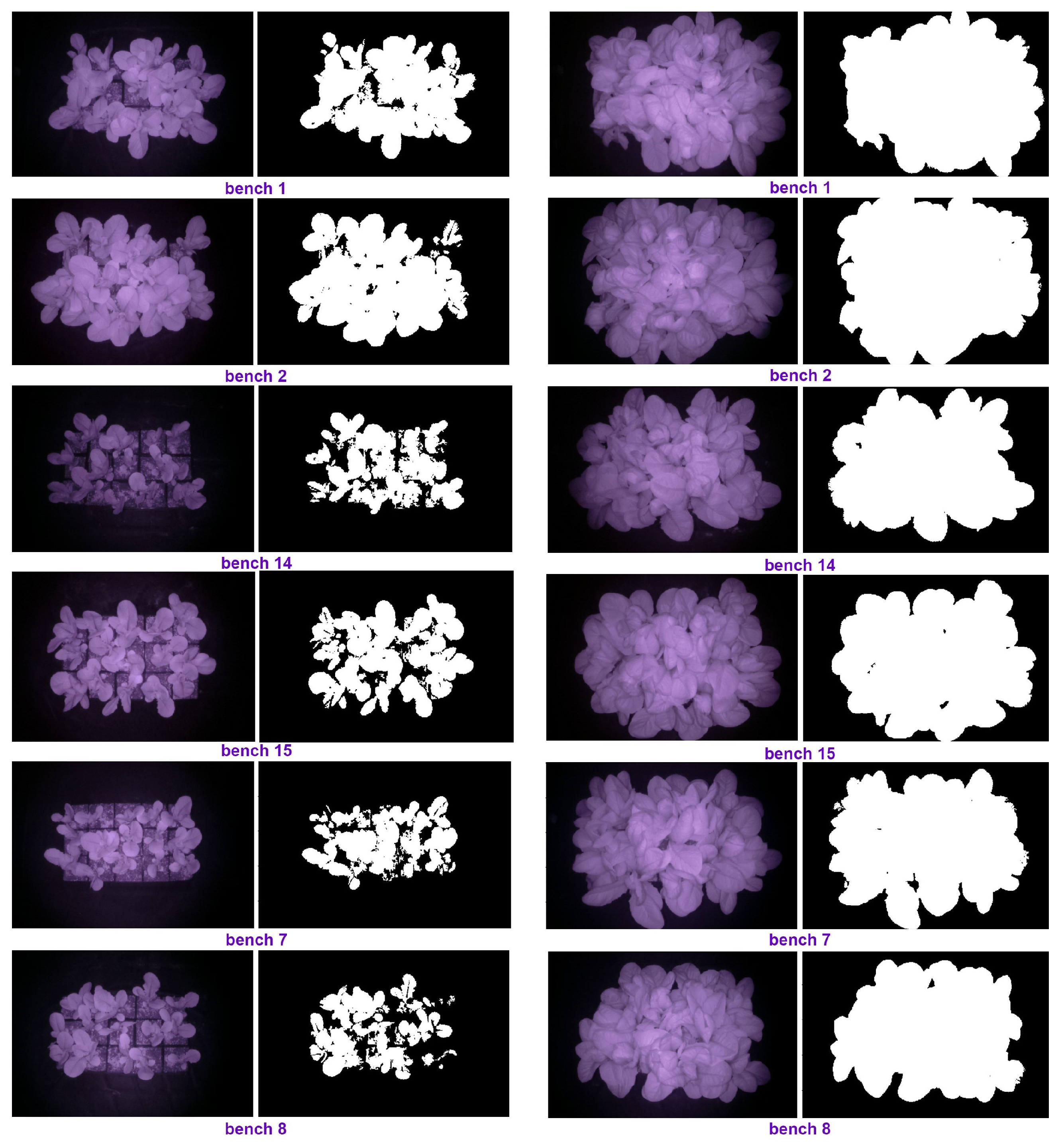 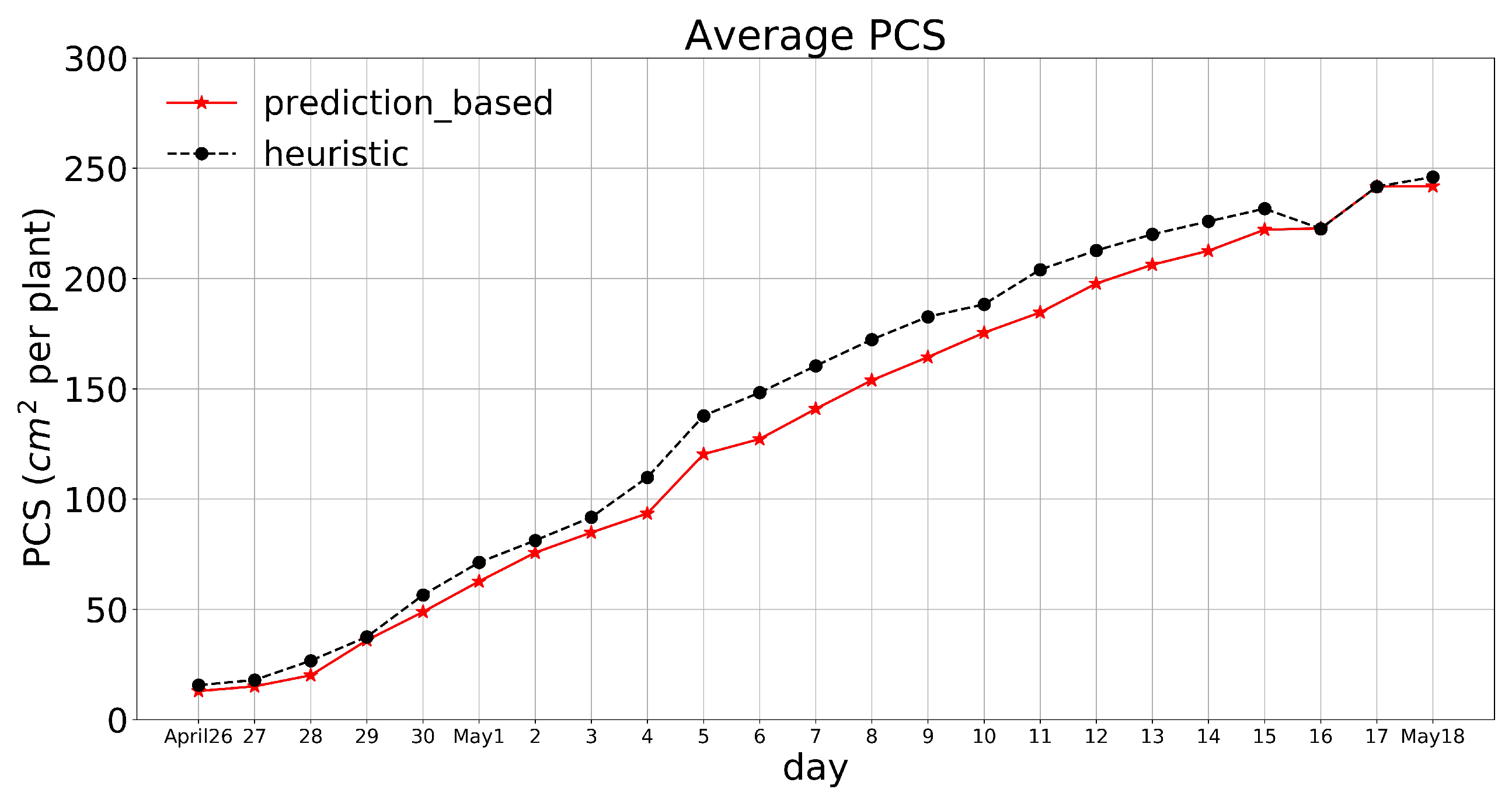