From Past to Present: Biotechnology in Mexico Using Algae and Fungi
Next Article in Special Issue

The composition of free volatile compounds of essential oils (EO) and hydrosols (Hy) from four different localities of the species Veronica austriaca ssp. jacquinii (Baumg.) Eb. Fisch. were analyzed by gas chromatography coupled with mass spectrometry. In the EOs, the most abundant compounds identified were hexahydrofarnesyl acetone (23.34–52.56%), hexadecanoic acid (palmitic acid, 26.71–58.91%) and octadecanol acetate (0–6.24%). The hydrosols were characterized by high abundance of methyl eugenol (23.35–57.93%), trans-p-mentha-1(7),8-dien-2-ol (5.24–7.69%) and thymol (3.48–9.45%). Glandular trichomes were analyzed using SEM (Scanning Electron Microscopy), as they are the sites of synthesis of free volatile compounds. We have detected glandular trichomes, consisting of a one stalk cell and two elliptically shaped head cells, and non-glandular (unbranched, bi-cellular to multicellular) trichomes on stems, leaves and the sepals. Data for volatile compounds from EOs and hydrosols were analyzed using Principal Component Analyses (PCA) to demonstrate variations in the composition of the volatile compounds identified. Isolated samples of EO and hydrosols were analyzed for their antioxidant activity using two methods, DPPH (2,2-diphenyl-1-picrylhydrazyl) and ORAC (Oxygen Radical Absorbance Capacity). The essential oils showed higher antioxidant activity than the hydrosols in ORAC method, but lower activity by the DPPH method. The isolates were also tested for their antiproliferative activity on different types of cancer cells and also on two lines of healthy cells, and the results showed that the extracts were not toxic to the cell lines tested. Total polyphenols, total tannins, total flavonoids and total phenolic acids were also analyzed and determined spectrophotometrically. The free volatile compounds of Veronica austriaca ssp. jacquinii can be considered as a safe natural product. View Full-Text
Keywords: Veronica; volatile compounds; GC-MS; antioxidant activity; DPPH; ORAC; essential oil; hydrosol; antiproliferative activity; PCA Veronica; volatile compounds; GC-MS; antioxidant activity; DPPH; ORAC; essential oil; hydrosol; antiproliferative activity; PCA
►▼ Show Figures 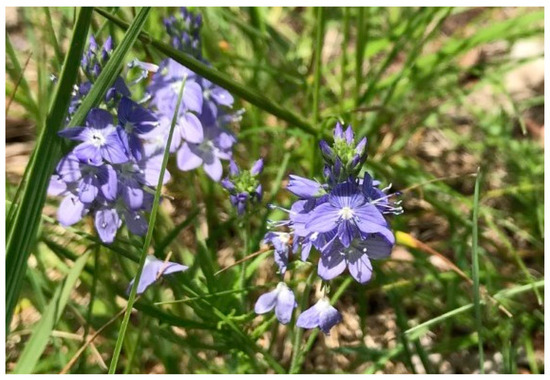