How Do Novel M-Rootstock (Vitis Spp.) Genotypes Cope with Drought?

Rising temperature is among the most remarkably stressful phenomena induced by global climate changes with negative impacts on crop productivity and quality. It has been previously shown that volatiles belonging to the isoprenoid family can confer protection against abiotic stresses. In this work, two Vitis vinifera cv. ‘Chardonnay’ clones (SMA130 and INRA809) differing due to a mutation (S272P) of the DXS gene encoding for 1-deoxy-D-xylulose-5-phosphate (the first dedicated enzyme of the 2C-methyl-D-erythritol-4-phosphate (MEP) pathway) and involved in the regulation of isoprenoids biosynthesis were investigated in field trials and laboratory experiments. Leaf monoterpene emission, chlorophyll fluorescence and gas-exchange measurements were assessed over three seasons at different phenological stages and either carried out in in vivo or controlled conditions under contrasting temperatures. A significant (p < 0.001) increase in leaf monoterpene emission was observed in INRA809 when plants were experiencing high temperatures and over two experiments, while no differences were recorded for SMA130. Significant variation was observed for the rate of leaf CO2 assimilation under heat stress, with INRA809 maintaining higher photosynthetic rates and stomatal conductance values than SMA130 (p = 0.003) when leaf temperature increased above 30 °C. At the same time, the maximum photochemical quantum yield of PSII (Fv/Fm) was affected by heat stress in the non-emitting clone (SMA130), while the INRA809 showed a significant resilience of PSII under elevated temperature conditions. Consistent data were recorded between field seasons and temperature treatments in controlled environment conditions, suggesting a strong influence of monoterpene emission on heat tolerance under high temperatures. This work provides further insights on the photoprotective role of isoprenoids in heat-stressed Vitis vinifera, and additional studies should focus on unraveling the mechanisms underlying heat tolerance on the monoterpene-emitter grapevine clone. View Full-Text
Keywords: leaf monoterpene emission; heat stress tolerance; chlorophyll fluorescence; photosynthesis; grapevine leaf monoterpene emission; heat stress tolerance; chlorophyll fluorescence; photosynthesis; grapevine
►▼ Show Figures 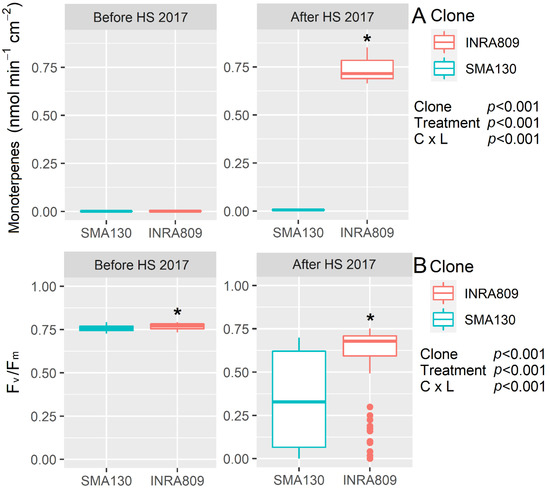