(1) background: Urban representations of the Amazon are urgently needed in order to better understand the complexity of urban processes in this area of the World. So far, limited work that represents Amazonian urban regions has been carried out. (2) methods: Our study area is the Ecuadorian Amazon. We performed a K-means algorithm using six urban indicators: Urban fractal dimension, number of paved streets, urban radiant intensity (luminosity), and distances to the closest new deforested areas, to oil pollution sources, and to mining pollution sources. We also carried out fieldwork to qualitatively validate our geospatial and statistical analyses. (3) results: We generated six Amazonian urban regions representing different urban configurations and processes of major cities, small cities, and emerging urban zones. The Amazonian urban regions generated represent the urban systems of the Ecuadorian Amazon at a general scale, and correspond to the urban realities at a local scale. (4) conclusions: An Amazonian urban region is understood as a set of urban zones that are dispersed and share common urban characteristics such a similar distance to oil pollution sources or similar urban radiant intensity. Our regionalization model represents the complexity of the Amazonian urban systems, and the applied methodology could be transferred to other Amazonian countries. View Full-Text
Keywords: amazon; urbanization; regions; luminosity; fractal dimension; k-means amazon; urbanization; regions; luminosity; fractal dimension; k-means
►▼ Show Figures 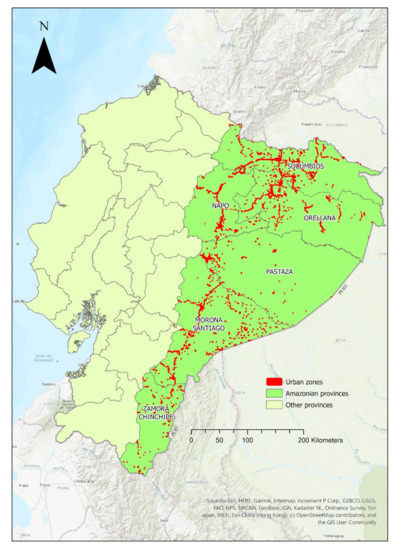