The integration of geography and machine learning can produce novel approaches in addressing a variety of problems occurring in natural and human environments. This article presents an experiment that identifies cities that are similar according to their land use data. The article presents interesting preliminary experiments with screenshots of maps from the Czech map portal. After successfully working with the map samples, the study focuses on identifying cities with similar land use structures. The Copernicus European Urban Atlas 2012 was used as a source dataset (data valid years 2015–2018). The Urban Atlas freely offers land use datasets of nearly 800 functional urban areas in Europe. To search for similar cities, a set of maps detailing land use in European cities was prepared in ArcGIS. A vector of image descriptors for each map was subsequently produced using a pre-trained neural network, known as Painters, in Orange software. As a typical data mining task, the nearest neighbor function analyzes these descriptors according to land use patterns to find look-alike cities. Example city pairs based on land use are also presented in this article. The research question is whether the existing pre-trained neural network outside cartography is applicable for categorization of some thematic maps with data mining tasks such as clustering, similarity, and finding the nearest neighbor. The article’s contribution is a presentation of one possible method to find cities similar to each other according to their land use patterns, structures, and shapes. Some of the findings were surprising, and without machine learning, could not have been evident through human visual investigation alone. View Full-Text
Keywords: Urban Atlas; Orange software; land use; machine learning Urban Atlas; Orange software; land use; machine learning
►▼ Show Figures 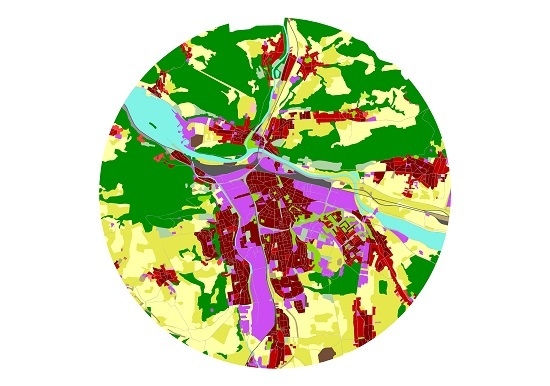