In regional unemployment research, only aggregated regional data are often used, such as basic regions for the application of regional policies in the European Union, NUTS 2 regions. However, to study the within-region component of differentiation and spatial aspects in their full scope, more detailed data are needed. We studied unemployment in Czechia. In all analyses, we used municipal data in an extended time series (2002–2019). We used statistics from labor offices in Czechia, which report the number of unemployed. In this study, unemployment is defined as the share of unemployed persons within the economically active population (15–64 age group). Data on the economically active population are available from the Czech Statistical Office on the 31st of December each year. Unfortunately, data from 2012 and 2013 were not available as data in those years were not collected on a municipal level. Importantly, regions in the whole time series were readjusted to the regional structure in 2019 to control for structural changes.
We used methods of spatial autocorrelation and entropy decomposition to study spatial aspects of unemployment [23]. The spatial autocorrelation was represented by Moran’s I [36,37] and the entropy decomposition by the Theil index [38]. These two methods are closely methodologically related (for details, see [23]). The Theil index decomposition enabled us to quantify the share of a selected regional level on the overall variability (between municipalities in this case). We could thus study shift of variability between regional levels. We studied shifts in variability between areas of municipalities with extended powers (AMEP) and NUTS 3 regions to variability between municipalities within these regions. Spatial autocorrelation added information about overall level of clustering of unemployment (global spatial autocorrelation, Moran’s I) and its spatial representation in the form of local clusters (local indicators of spatial association (LISA) cluster maps). The formulas for both methods (Moran’s I and Theil index decomposition) can be written as follows: where n = number of units, i = index for individual units, j = index for regions, k = number of regions, y = unemployment mean, wij = spatial weight matrix. In addition, for T (overall Theil index), TB = between-region component of the Theil index and TW = within-region component of the Theil index. The decomposition, the share of the between-region component on the overall Theil index, can be written as TB/T. In the Theil decomposition, we used two regional levels: 14 NUTS 3 regions and 206 AMEPs.
To understand the change of spatial autocorrelation over time, we used bivariate spatial autocorrelation [39]. Bivariate spatial autocorrelation measures correlations of Moran’s I in time. Specifically, bivariate Moran’s I was calculated as a regular Moran’s I, but values from a selected year in each spatial unit (municipalities) were correlated with mean values in the neighborhood in a reference year (spatial lag). Usually, the bivariate Moran’s I is used for correlation between one variable and the spatial leg of another variable. However, this might overestimate the spatial aspect of the correlation, which is often due to the in-place correlation [40].
One of the often discussed issues connected with the use of spatial autocorrelation is the representation of space, i.e., spatial weight matrix (wij). This matrix operationalizes the position and proximity of spatial units [36,41]. The selection of the spatial weight matrix is not crucial when general patterns are studied [23,42]. However, when studying unemployment, which is strongly influenced by commuting, applying network distances can significantly influence not only the absolute levels of Moran’s I but also its spatial patterns. Network spatial weights were used in [43,44]. In order to generate network spatial weights, we needed to associate each municipality with a point feature class representing both origin and feature destination. To create network spatial weights, we used the travel distance (as a time function) to calculate the weight between all pairs of the municipality. For a more in-depth discussion on geographical spatial weight matrices, see [45].
In this study, we used distance-based spatial weights and network spatial weights based on real-time distances between municipalities. A point representing each municipality was positioned into a specifically selected location, which was representative of the municipality (compared to often used centroids). These locations were available from the Czech Statistical Office; thus, we were not forced to use centroids. Time accessibility was based on the Czech road network from 2011, and accessibility times were constructed from [46,47]. The use of network spatial weights is quite rare in unemployment research. The reason is that, for the construction of network spatial weights, one needs point data, and unemployment studies are usually associated with regional data. However, the use of network spatial weights in unemployment research can be found in [12]. The comparison of spatial weights based on Euclidean distances and network spatial weights in the Czech regional system is presented in Table 1. Even though there was a strong correlation between the two methods in all three selected characteristics (percentage of spatial connectivity, average number of neighbors, and maximum number of neighbors), there were still significant differences, specifically, the maximum number of neighbors (along highways). It is important to bear in mind that this similarity is caused by a relatively homogenous Czech road network. The situation may be quite different in countries with less homogenous road networks.
The biggest differences between Euclidean distances and time-based network distances (accessibility distances) were observed in individual cases. An example of a region of neighboring units delimited using both types of spatial weights is depicted in Figure 1, where the neighboring units using Euclidean distances are compared with those based on time accessibility. The map clearly shows a significant difference between the distance-based spatial weights working with Euclidean distances and network spatial weights based on time accessibility in a real network. For time accessibility delimitation for the whole of Czechia, see [48]. The network spatial weights affected regional delimitation mostly along important highways and roads, where the average speed is much higher compared to others. Therefore, the neighboring units were stretched along these roads. Network spatial weights can help to mitigate the often-stated bias of Euclidean distance spatial weights.

The main goals of the study were (i) to study long-term trends in spatial distribution on unemployment (spatial dimension of unemployment) and (ii) to study differences between Euclidean distances and distances as a time function (time accessibility, distance decay). In this section, we present key methodological and empirical findings with some discussion on their policy implications.
Although the use of network spatial weights, which were scarcely used in the empirical context of this study, significantly changed the definition of neighborhoods (which are closer to functional regions constructed using travel to work data), the resulting spatial pattern of unemployment was very similar. This suggests that when studying unemployment, Euclidean distances will suffice for calculating spatial clustering using spatial autocorrelation methods. This is an important finding as time accessibility data are usually not available, and this study has proven that they are not necessary for robust results in certain conditions. However, network spatial weight might be important in the case of differing variables or when studying different regions with less dense road networks. Using network spatial weights, the spatial patterns of unemployment support the hypothesis that, for unemployment in Czechia, the regional structure corresponds with the structure of functional regions. This was shown by comparison of a Theil index decomposition (which works with regions) and spatial autocorrelation (which works with municipalities in this case). This is in line with findings from other authors.
The unemployment spatial patterns proved to be very stable. They were not significantly affected by economic and political changes and shocks (such as economic crises or opening of borders within Schengen). Even when the absolute values of unemployment changed significantly over time, the spatial patterns remained relatively stable. However, a slow yet steady shift of differentiation from macrolevels (variability between AMEP and NUTS 3 regions) to microlevels (variability between municipalities within these regions) was observed. This was documented by the Theil index decomposition as well as measuring the z-scores of Moran’s I. All aforementioned outcomes (relative stability and shift of differentiation to microlevels) are in line with the conclusions of other authors.
The empirical findings may have substantial regional and national policy implications. The significant shift of variability from the between-region component to within-region component suggests that the schemes tackling unemployment should refocus from regional mitigation tools to locally specific tools within the regions. Moreover, regional authorities may be given more flexibility to address the differences between municipalities. The stability of unemployment spatial patterns and the decrease in regional disparities in crises (such as in 2008–2010) indicate that problematic regions do not have to be treated differently during these times, and the regional aspects of state support do not have to be given different priority.
In future research, policy implications deserve more attention. From a methodological point of view, network spatial weights should be tested on different variables as time accessibility can play a much more important role. This approach is especially useful in border studies as bordering regions typically have bigger differences between Euclidean distance and time accessibility distance due to less dense transport infrastructure along the borders, especially in the case of countries from either side of the Iron Curtain.

This research was funded by the Czech Science Foundation (GACR), grant number 18-20904S, and by the Charles University Research Centre program UNCE/HUM/018. 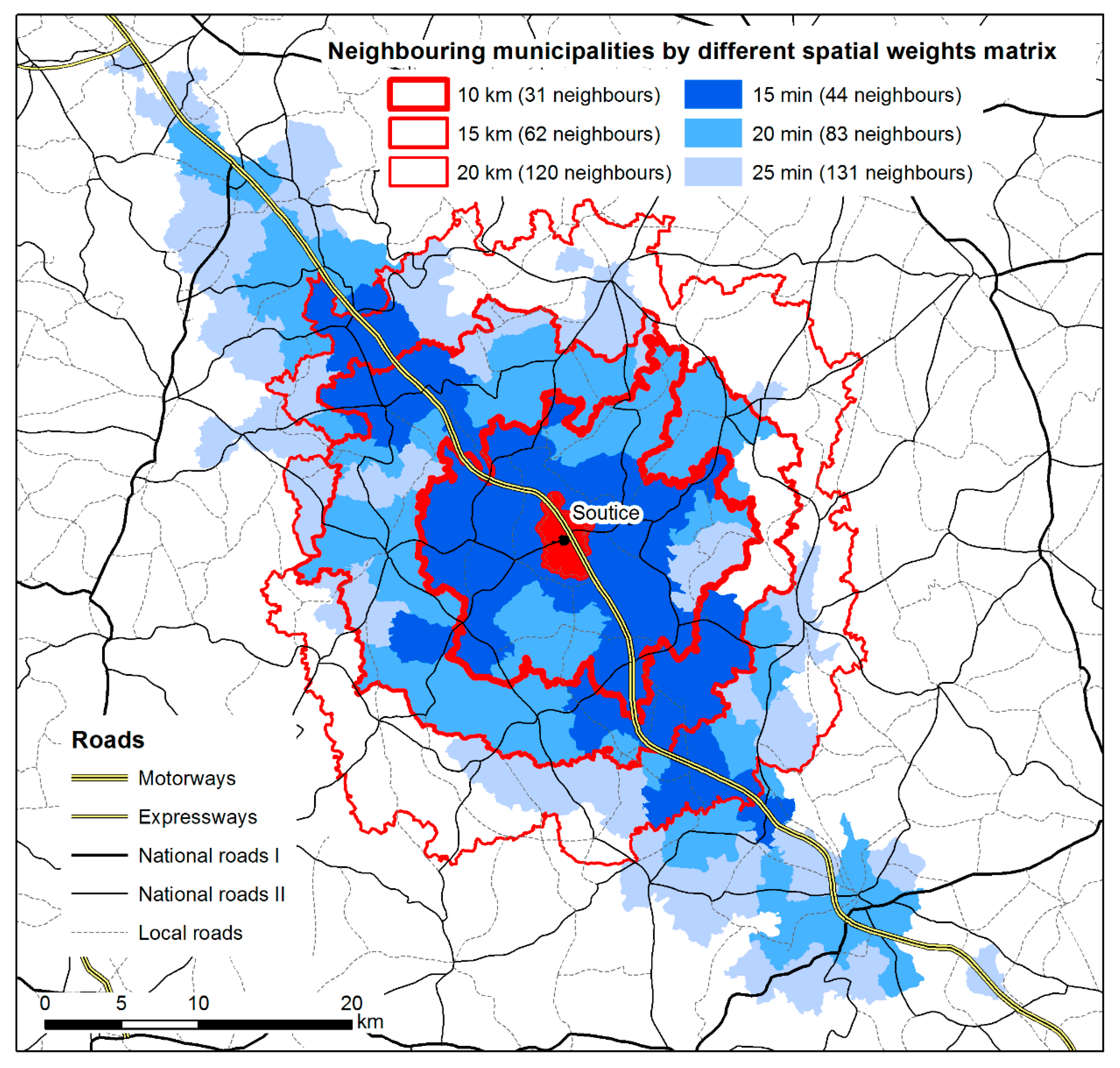 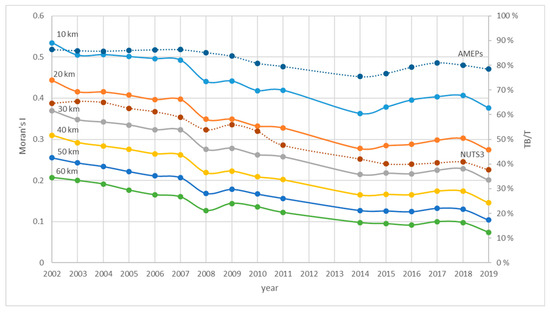 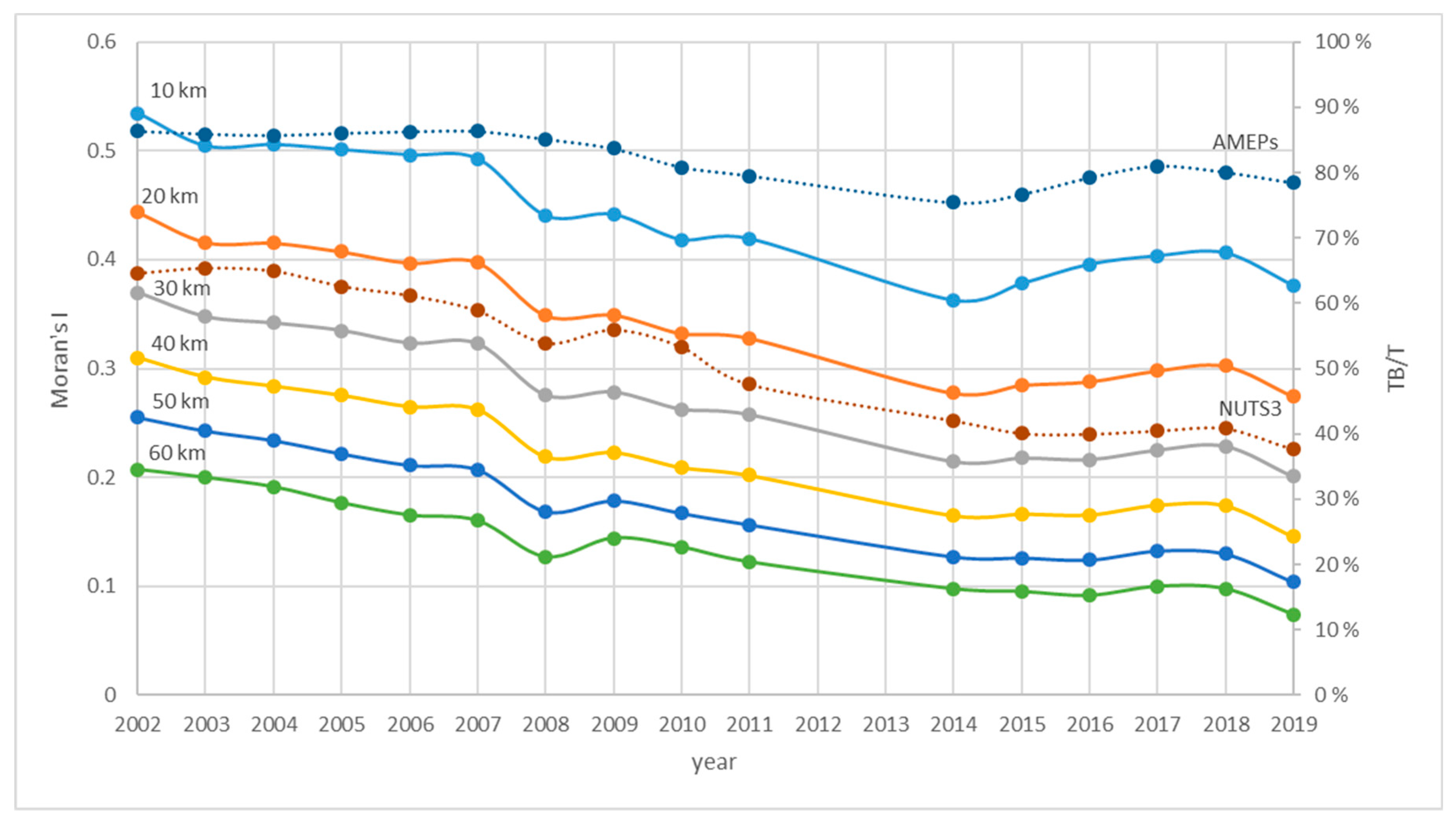 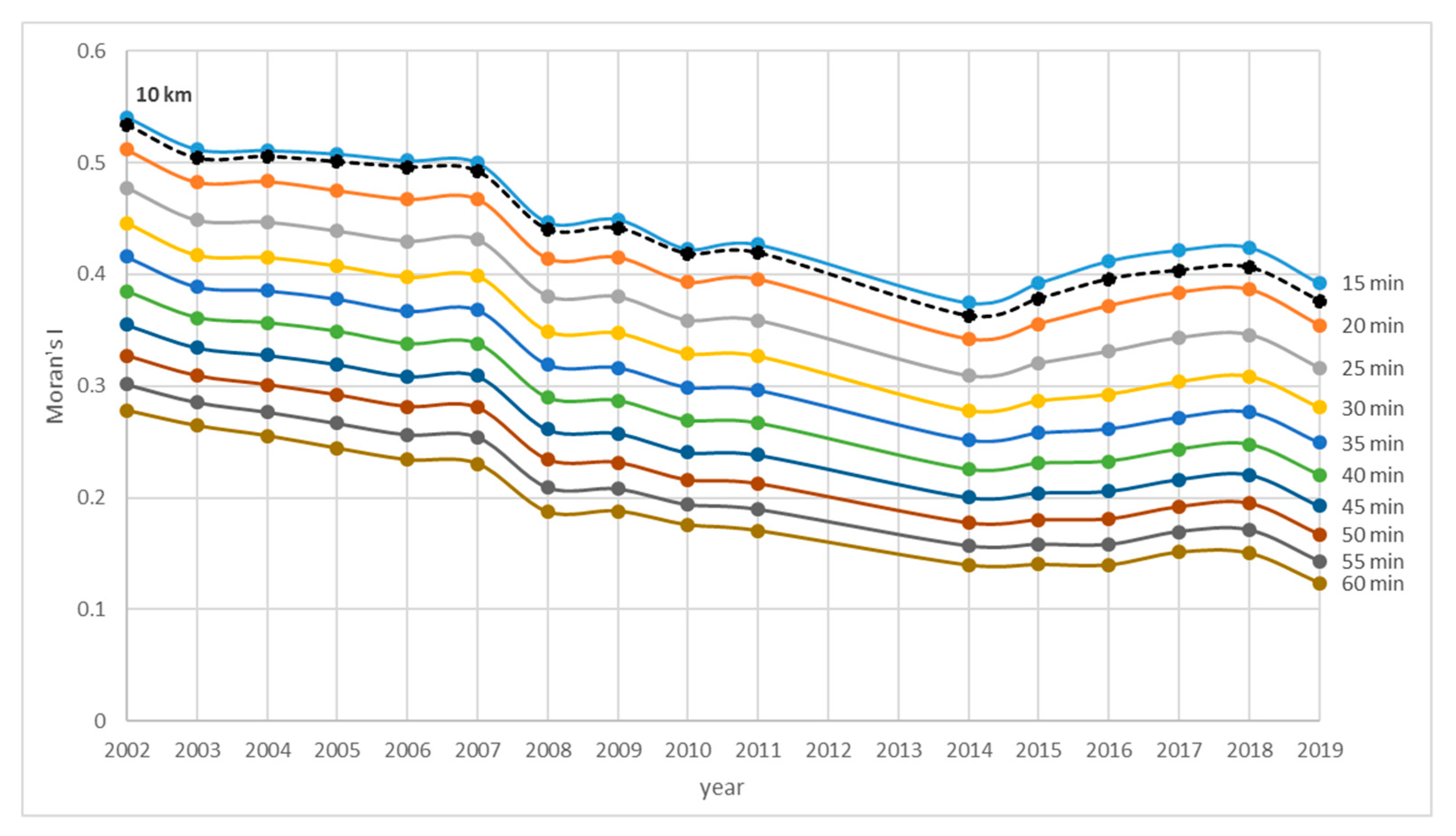 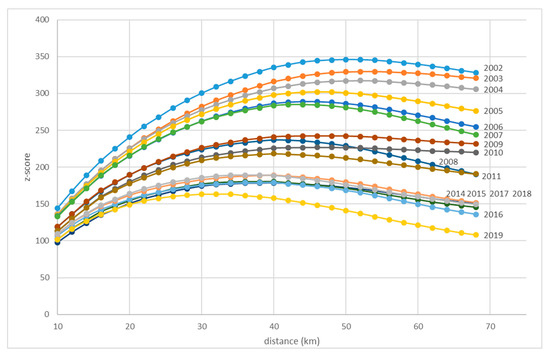