Sustainable Spatial and Temporal Development of Land Prices: A Case Study of Czech Cities
Next Article in Special Issue

Submerged aquatic vegetation (SAV) in the Khanh Hoa (Vietnam) coastal area plays an important role in coastal communities and the marine ecosystem. However, SAV distribution varies widely, in terms of depth and substrate types, making it difficult to monitor using in-situ measurement. Remote sensing can help address this issue. High spatial resolution satellites, with more bands and higher radiometric sensitivity, have been launched recently, including the Vietnamese Natural Resources, Environment, and Disaster Monitoring Satellite (VNREDSat-1) (V1) sensor from Vietnam, launched in 2013. The objective of the study described here was to establish SAV distribution maps for South-Central Vietnam, particularly in the Khanh Hoa coastal area, using Sentinel-2 (S2), Landsat-8, and V1 imagery, and then to assess any changes to SAV over the last ten years, using selected historical data. The satellite top-of-atmosphere signals were initially converted to radiance, and then corrected for atmospheric effects. This treated signal was then used to classify Khanh Hoa coastal water substrates, and these classifications were evaluated using 101 in-situ measurements, collected in 2017 and 2018. The results showed that the three satellites could provide high accuracy, with Kappa coefficients above 0.84, with V1 achieving over 0.87. Our results showed that, from 2008 to 2018, SAV acreage in Khanh Hoa was reduced by 74.2%, while gains in new areas compensated for less than half of these losses. This is the first study to show the potential for using V1 and S2 data to assess the distribution status of SAV in Vietnam, and its outcomes will contribute to the conservation of SAV beds, and to the sustainable exploitation of aquatic resources in the Khanh Hoa coastal area. View Full-Text
Keywords: Submerged aquatic vegetation; VNREDSat-1; Sentinel-2; Landsat-8; distribution map; temporal change map Submerged aquatic vegetation; VNREDSat-1; Sentinel-2; Landsat-8; distribution map; temporal change map
►▼ Show Figures 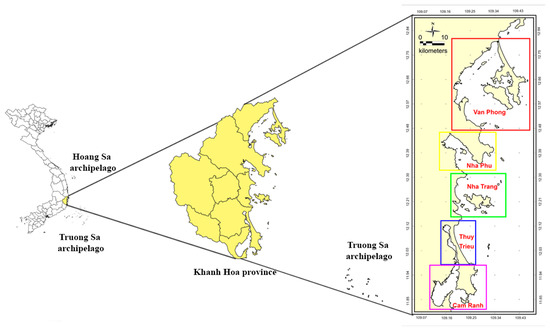