Visualizing When, Where, and How Fires Happen in U.S. Parks and Protected Areas

Land degradation caused by soil erosion is considered among the most severe problems of the 21stcentury. It poses serious threats to soil fertility, food availability, human health, and the world ecosystem. The purpose of the study is to make a quantitative mapping of soil loss in the Chitral district, Pakistan. For the estimation of soil loss in the study area, the Revised Universal Soil Loss Equation (RUSLE) model was used in combination with Remote Sensing (RS) and Geographic Information System (GIS). Topographical features of the study area show that the area is more vulnerable to soil loss, having the highest average annual soil loss of 78 ton/ha/year. Maps generated in the study show that the area has the highest sediment yield of 258 tons/ha/year and higher average annual soil loss of 450 tons/ha/year. The very high severity class represents 8%, 16% under high, 21% under moderate, 12% under low, and 13% under very low soil loss in the Chitral district. The above study is helpful to researchers and planners for better planning to control the loss of soil in the high severity zones. Plantation of trees and structures should be built like check dams, which effectively control the soil erosion process. View Full-Text
Keywords: land degradation; soil erosion; RUSLE; GIS; soil loss land degradation; soil erosion; RUSLE; GIS; soil loss
►▼ Show Figures 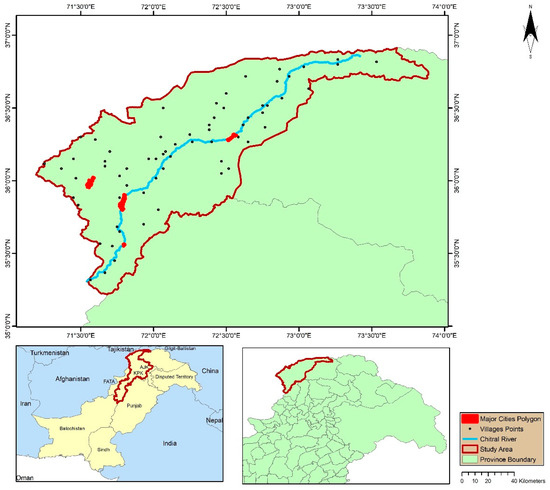