Visualizing When, Where, and How Fires Happen in U.S. Parks and Protected Areas

Fire management in protected areas faces mounting obstacles as climate change alters disturbance regimes, resources are diverted to fighting wildfires, and more people live along the boundaries of parks. Evidence-based prescribed fire management and improved communication with stakeholders is vital to reducing fire risk while maintaining public trust. Numerous national fire databases document when and where natural, prescribed, and human-caused fires have occurred on public lands in the United States. However, these databases are incongruous and non-standardized, making it difficult to visualize spatiotemporal patterns of fire and engage stakeholders in decision-making. We created interactive decision analytics (“VISTAFiRe”) that transform fire history data into clear visualizations of the spatial and temporal dimensions of fire and its management. We demonstrate the utility of our approach using Big Cypress National Preserve and Everglades National Park as examples of protected areas experiencing fire regime change between 1980 and 2017. Our open source visualizations may be applied to any data from the National Park Service Wildland Fire Events Geodatabase, with flexibility to communicate shifts in fire regimes over time, such as the type of ignition, duration and magnitude, and changes in seasonal occurrence. Application of the tool to Everglades and Big Cypress revealed that natural wildfires are occurring earlier in the wildfire season, while human-caused and prescribed wildfires are becoming less and more common, respectively. These new avenues of stakeholder communication are allowing the National Park Service to devise research plans to prepare for environmental change, guide resource allocation, and support decision-making in a clear and timely manner. View Full-Text
Keywords: decision analytics; wildfire; fire management; visualization; open science decision analytics; wildfire; fire management; visualization; open science
►▼ Show Figures 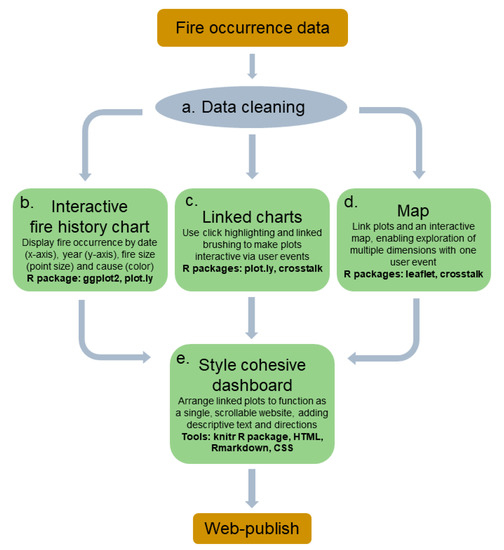 
Inglis NC, Vukomanovic J. Visualizing When, Where, and How Fires Happen in U.S. Parks and Protected Areas. ISPRS International Journal of Geo-Information. 2020; 9(5):333.