The Relationship between Near-Repeat Street Robbery and the Environment: Evidence from Malmö, Sweden
Next Article in Special Issue

Global mean sea level has been rising at an increasing rate, especially since the early 19th century in response to ocean thermal expansion and ice sheet melting. The possible consequences of sea level rise pose a significant threat to coastal cities, inhabitants, infrastructure, wetlands, ecosystems, and beaches. Sea level changes are not geographically uniform. This study focuses on present-day sea level changes in the Black Sea using satellite altimetry and tide gauge data. The multi-mission gridded satellite altimetry data from January 1993 to May 2017 indicated a mean rate of sea level rise of 2.5 ± 0.5 mm/year over the entire Black Sea. However, when considering the dominant cycles of the Black Sea level time series, an apparent (significant) variation was seen until 2014, and the rise in the mean sea level has been estimated at about 3.2 ± 0.6 mm/year. Coastal sea level, which was assessed using the available data from 12 tide gauge stations, has generally risen (except for the Bourgas Station). For instance, from the western coast to the southern coast of the Black Sea, in Constantza, Sevastopol, Tuapse, Batumi, Trabzon, Amasra, Sile, and Igneada, the relative rise was 3.02, 1.56, 2.92, 3.52, 2.33, 3.43, 5.03, and 6.94 mm/year, respectively, for varying periods over 1922–2014. The highest and lowest rises in the mean level of the Black Sea were in Poti (7.01 mm/year) and in Varna (1.53 mm/year), respectively. Measurements from six Global Navigation Satellite System (GNSS) stations, which are very close to the tide gauges, also suggest that there were significant vertical land movements at some tide gauge locations. This study confirmed that according to the obtained average annual phase value of sea level observations, seasonal sea level variations in the Black Sea reach their maximum annual amplitude in May–June. View Full-Text
Keywords: Black sea; sea level change; tide gauge; satellite altimetry; GNSS Black sea; sea level change; tide gauge; satellite altimetry; GNSS
►▼ Show Figures 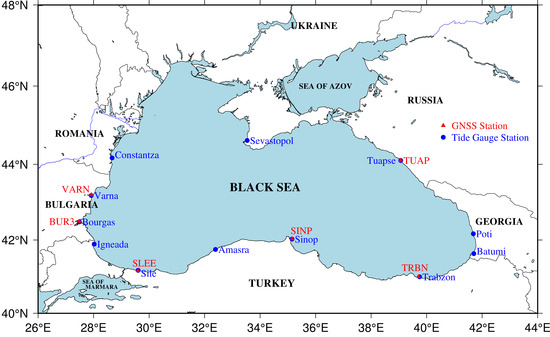