Personalized Legibility of an Indoor Environment for People with Motor Disabilities: A New Framework

:
A mental map refers to the personalized representation of spatial knowledge in the human brain and is based on the perceptions, experiences, and interactions of people with their environment. For people with motor disabilities (PWMD) some perceptions and interactions with the environment during their mobility occur in different ways and consequently lead to different mental maps. For example, these people perceive and interact differently with elevators, escalators, and steps during their mobility. Hence, their perceptions of the level of complexity and the legibility of an environment may be different. Legibility of an environment is an indicator that measures the level of complexity and the ease of understanding of that environment by a person. In the literature, legibility is mostly estimated based on the environmental factors such as visibility, connectivity, and layout complexity for a given space. However, the role of personal factors (e.g., capacities) is rarely considered in the legibility assessment, which complicates its personalization. This paper aims at studying the influence of personal factors on the evaluation of the legibility of indoor environments for PWMD. In addition to the visibility, the connectivity, and the complexity of indoor environments, we also integrate the influence of the level of accessibility (i.e., presence of facilitators and obstacles) in the legibility assessment process. The Quebec City Convention Centre is selected as our study area and the legibility of this building is quantified. We show how the integration of the above-mentioned factors can influence the legibility for PWMD and hence their mobility performance in those environments.
Keywords:
personalized legibility; indoor environment; people with motor disabilities; mobility; cognitive map

3. A New Conceptual Framework for the Assessment of Personalized Legibility for PWMD

4. Estimation of the Personalized Legibility for PWMD based on the Proposed Framework

In this paper, we have proposed a novel framework for the assessment of the personalized legibility of indoor environments based on the Disability Creation Process (DCP) model. We argued that the legibility of an environment is the result of the interactions between personal factors and environmental factors, highlighting the importance of the consideration of personal perceptions, capabilities, experiences and skills in the evaluation of the legibility of an indoor environment. This has been done with the aim of designing smarter and more accessible indoor environments, leveraging the potential of advanced navigation and communication technologies to help PWMD in their mobility.
In the proposed model, we have considered different factors affecting the legibility of indoor environments, starting with factors such as visual access, connectivity, and complexity of building layout and extending the concept to include the accessibility level as one of the most important factors in the evaluation of the legibility of an environment, especially for PWMD. We argued that the level of the legibility of the environment should be personalized as the perception, capability, and experience of each individual, which are different. Although the difference in legibility level for the general population may not be significant, however, depending on the severity and type of disability, the difference of legibility may be very significant for PWMD.
In line with personalization process, we argued that all of the factors, such as visual access, connectivity, and complexity, result from the interactions of humans with their environments. However, in previous works, they are often estimated based on geometric characteristics of the environment and are rarely personalized for the legibility assessment. In addition, we found that the legibility can be explicitly linked with the accessibility level. We argued that the measurement of the visual saliency and visibility of facilitators and obstacles are key elements that should precede accessibility assessment. Indeed, these objects should first be perceived by people for legibility assessment, especially in an unfamiliar environment. In terms of accessibility level, we have reported that for PWMD, obstacles contribute to an increase in the risk of falling or accidents during a mobility task. Hence, the presence of obstacles decreases the legibility of the environment, whereas the perception of facilitators helps to increase the legibility of the environment. Considering these elements in the development of assistive navigation technologies would help to personalize routes and instructions for PWMD based on their personal capabilities. It is worth mentioning that the concepts of obstacles and facilitators are not absolute, and an object can be an obstacle for an individual and be considered as a facilitator for others. This needs further investigation so that the environment can be adapted to accommodate different needs in a more optimal approach.
In our experiment, and for the sake of simplicity, we made several assumptions in our experiment to produce the presented results. For instance, we have computed more generic legibility values for the whole population with and without disabilities that need to be further specified in the future experimentation for PWMD. In addition, for the purpose of this paper, we did not define specific weights for each factor based on its significance. In fact, our results in the case study were obtained with the assumption that the weights of the proposed legibility factors are equal. However, the importance of the legibility factors can be changed according to an individual’s profile. Hence, in order to specifically determine the weight of each legibility factor, it is necessary to evaluate the mobility performance of PWMD (with different profiles) in the environment. This will be further investigated in the next step of our research.
Finally, the proposed model needs further validation efforts. An alternative option for the validation of the legibility layer would be to carry out an experiment with the participation of a group of PWMD as well as a group of people without disabilities for comparison purposes. According to Li and Klippel [11], by recruiting people, in this case PWMD, we may measure the ability of these people to reach their destination by assessing indicators such as the number of mistakes to reach their destinations, the time taken and the additional distance traveled with respect to the shortest path from origin to destination. With these indicators, we can correlate the calculated legibility layer with the mobility performance of PWMD. In addition, we may estimate the significance of the legibility factors using these indicators.

In this paper, we have proposed a novel conceptual framework for the assessment of the personalized legibility of indoor environments for PWMD. First, the legibility was conceptualized as the result of interactions between a person with motor disability and the environment, based on the disability creation model proposed by Fougeyrollas et al. [19] and affordance theory. We argued that the personalized legibility of the environment results from the perception of the environment by each individual and depends on the mental representation that the person has from the environment. We also argued that this mental representation is enriched according to the sense–plan–act paradigm for each person. Legibility concerns how easily this map is understood and how well it supports mobility of PWMD in an indoor environment.
We argued that legibility is affected by several factors derived from the integration of personal and environmental factors for a specific task. We proposed factors including physical characteristics of the environment and the consideration of obstacles and facilitators, which affect PWMD more significantly than the general population, but will also impact the latter. We suggested that in addition to the interconnected density or ICD, visibility, and connectivity factors, legibility is affected by the level of accessibility, including the visual saliency of scenes (e.g., color, intensity, contrast, and orientation of the visual field) and the facilitators and obstacles with consideration of their visibility and visual saliency.
Based on the legibility factors and the proposed estimation approach of legibility for PWMD, the legibility layer was calculated inside the Quebec Convention Centre building, on the 4th floor. As a result, this legibility layer shows that the lowest legibility is located near the building escalator, whereas the highest legibility is located near the walls and corners of the main hall.
This approach allows architects and engineers to get a better estimation of the level of legibility and facilitates subsequent actions to increase the legibility of indoor environments, especially for PWMD. Furthermore, this approach may help to create a smart environment where sensors and actuators are optimally located to support better wayfinding. It may also help to improve navigation systems by suggesting more adapted and legible paths instead of shortest paths for PWMD.

This work has been financially supported by the Natural Sciences and Engineering Research Council (NSERC) of Canada as well as a fund from the Ministry of Economy and Innovation of Quebec for the MobiliSIG project.

We want to thank the Quebec Convention Centre Organization for their cooperation. 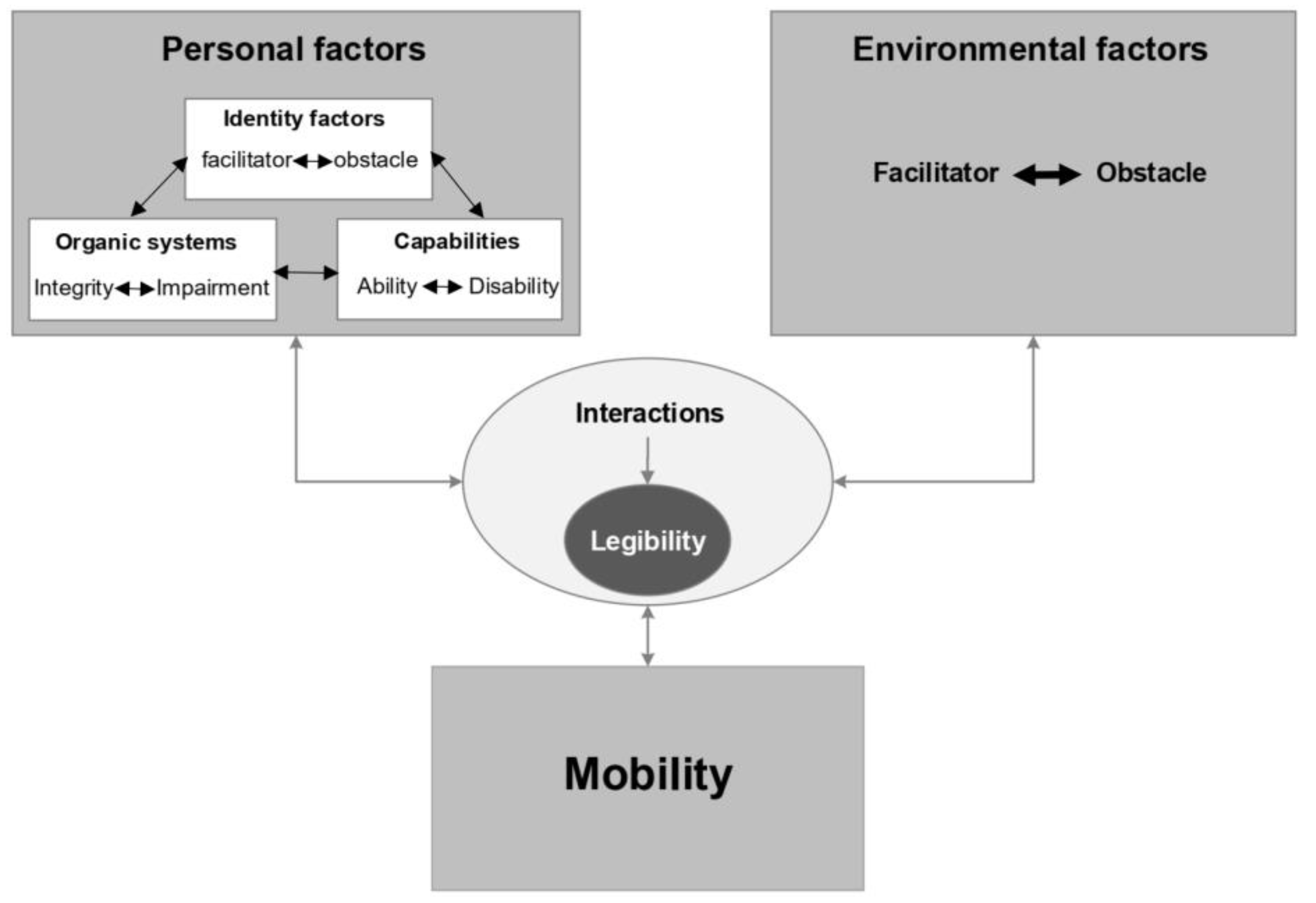 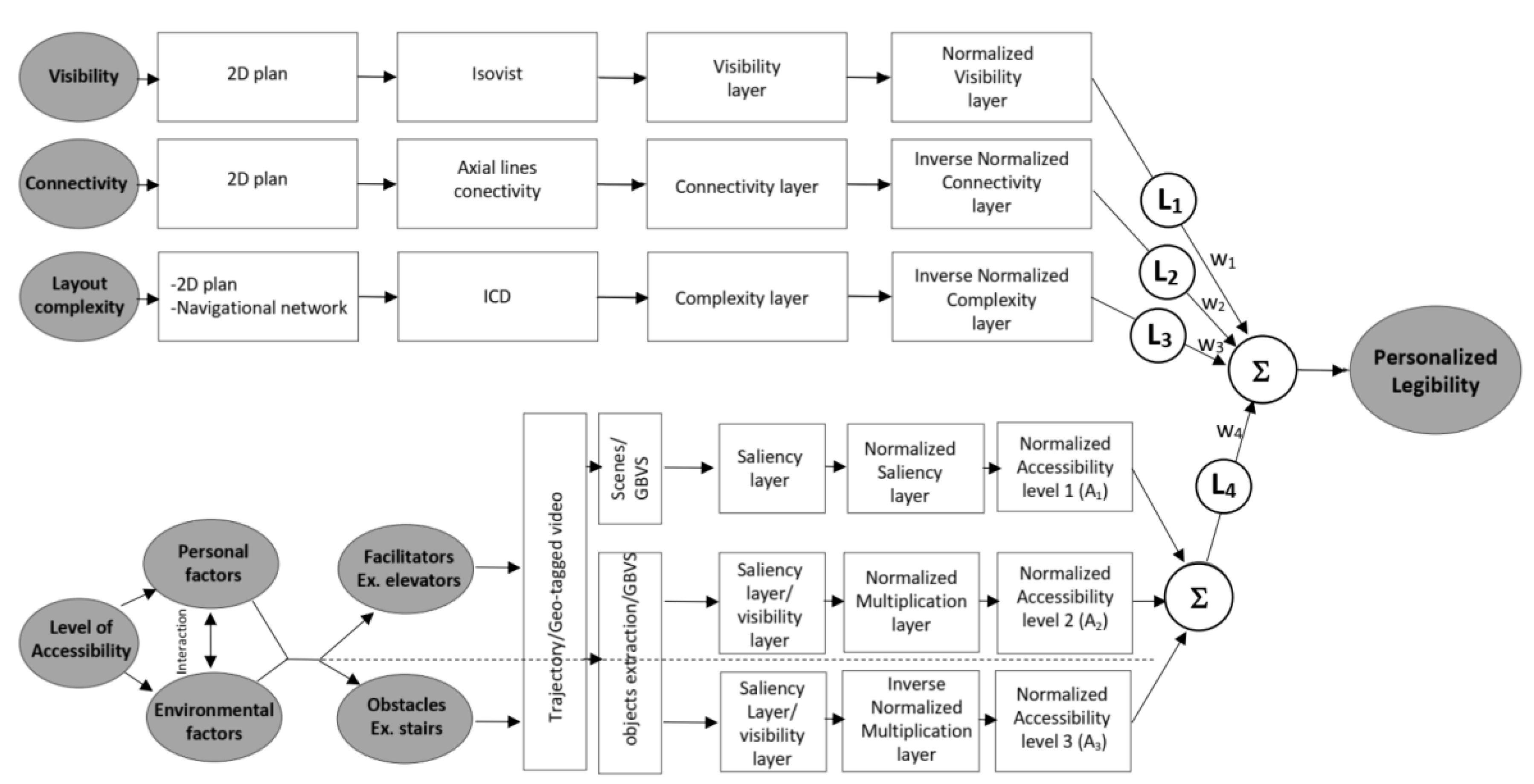 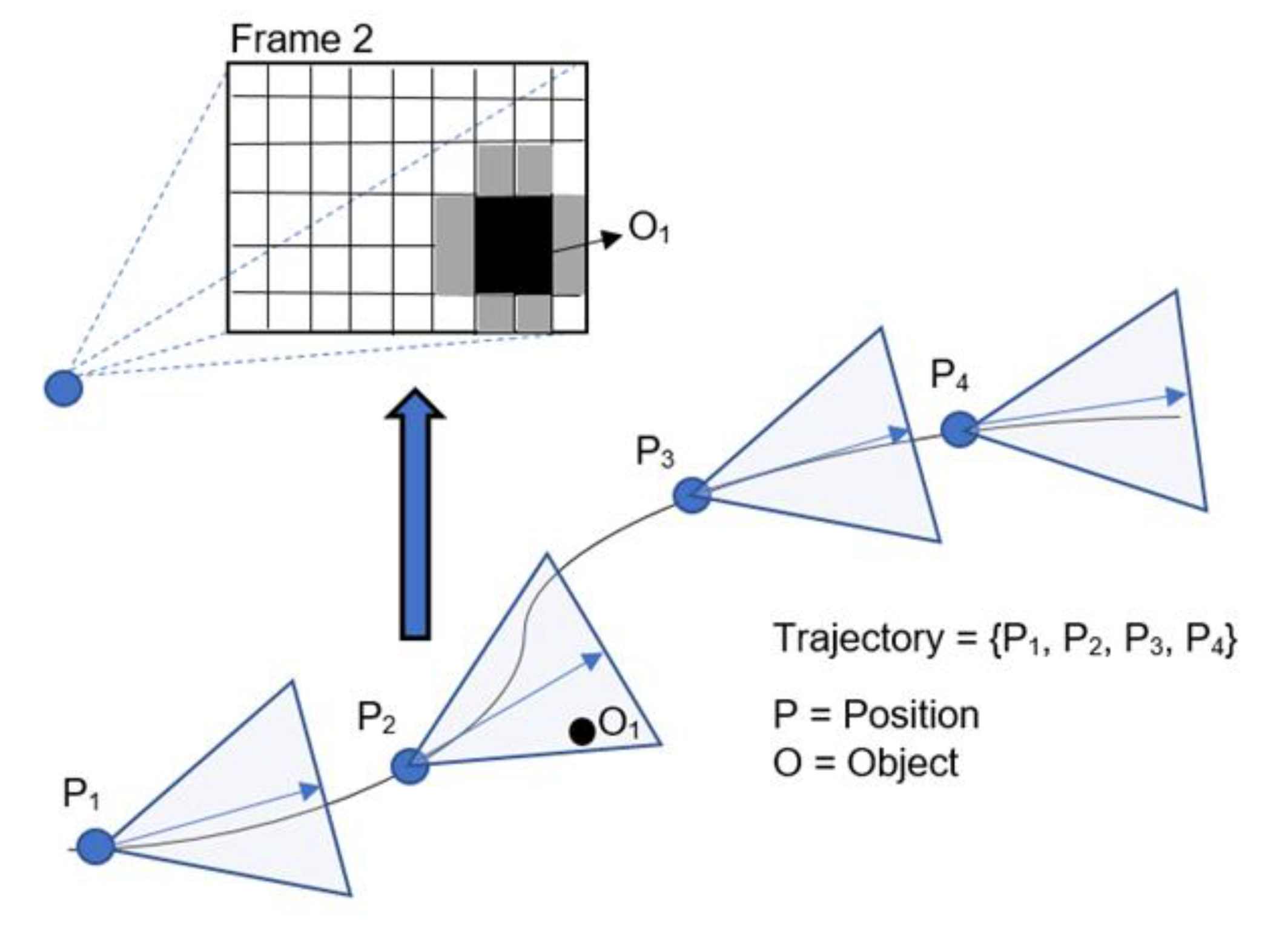 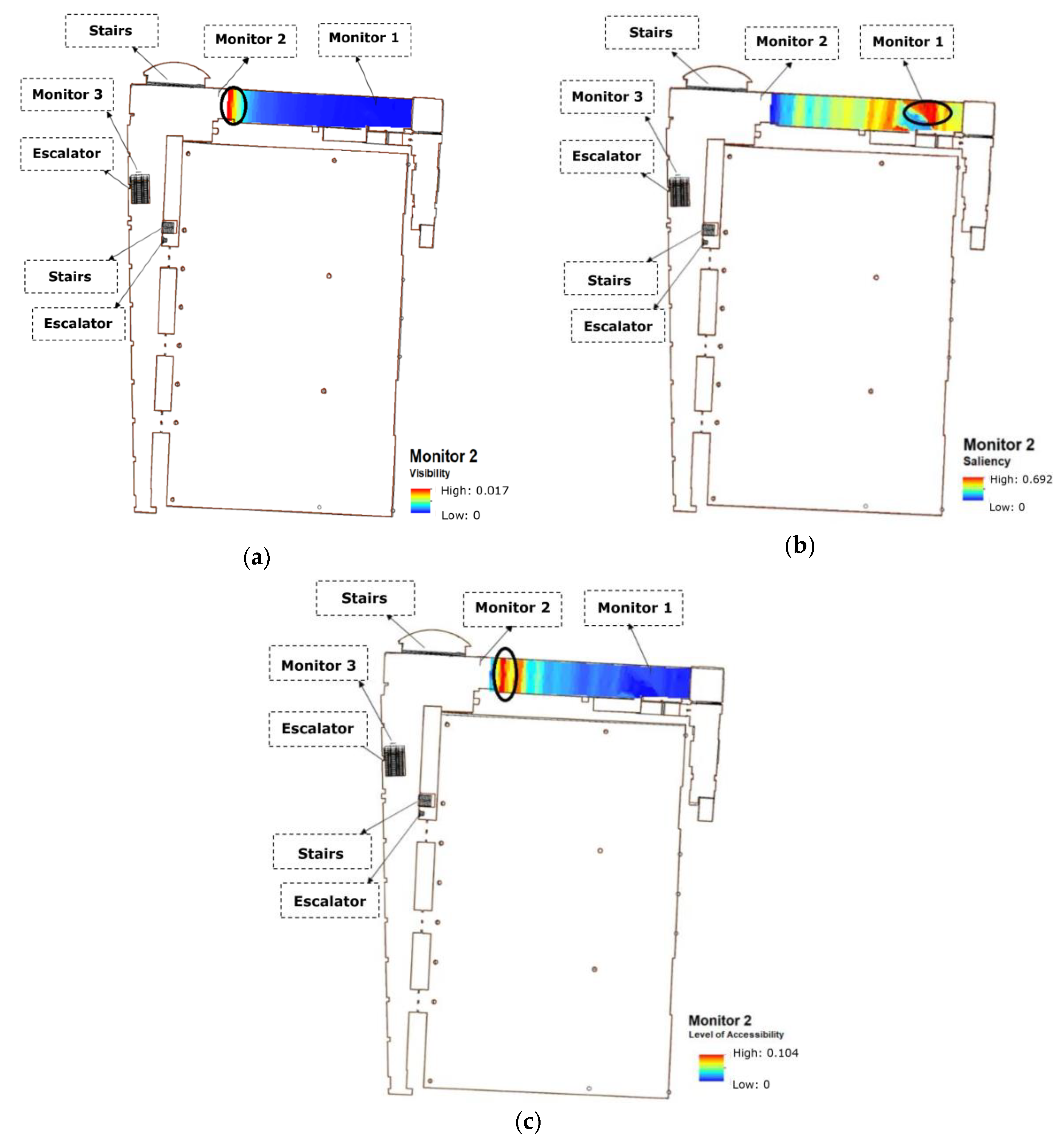 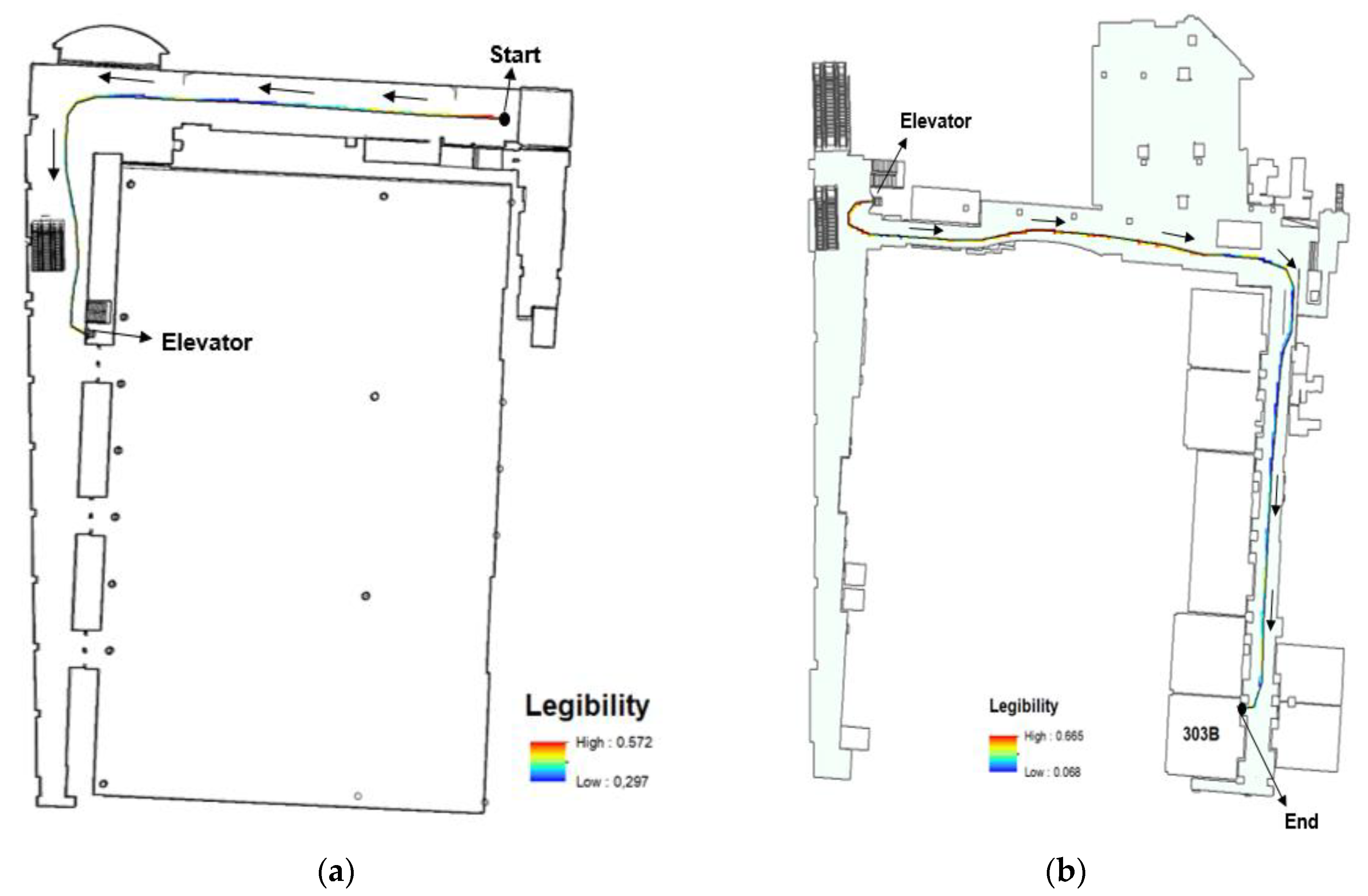