The infiltration and the strong collapsibility of loess are the main exogenic and endogenic factors, respectively, that contribute to loess landslides and the secondary failure of landslide bodies [1,2,3,4,5,6]. In recent years, loess-covered areas have been prone to rainfall-induced landslides due to variable climatic conditions and anthropogenic activities [7,8,9]. Moreover, large-scale landslide bodies tend to exhibit secondary failure due to an increased infiltration rate [10,11,12]. This phenomenon worsens the situation in landslide-prone areas.
The infiltration rate can be used to evaluate how quickly water enters the soil, and a high infiltration rate tends to greatly decrease the shear strength of the soil due to increases in the water content and pore water pressure [13,14,15,16,17]. Loess is characterized by well-developed vertical jointing and strong collapsibility, which significantly influence the infiltration process [3,18]. The collapsibility of loess tends to worsen due to the destruction of the soil structure during the landslide process, triggering further secondary failures of the landslide body. According to statistical studies, 94.2% of landslides are associated with rainfall, and 5.6% of previous landslides were reactivated in the 2011–2016 period in the Chinese Loess Plateau [19,20,21].
Many studies have shown that loess slopes tend to fail due to their high infiltration capacity and collapsibility, especially under heavy rainfall or irrigation [9,16,20]. However, the infiltration process and the characteristics of the loess and the landslide body are extremely complex and are influenced by the physical properties, recovery state, crust, structure slope aspect, and gradient [22,23,24,25]. Several studies have focused on the infiltration characteristics, the failure mechanisms, and the triggering systems of loess landslides based on field monitoring of rainfall infiltration and laboratory experiments [1,15,26,27]. However, little attention has been paid to the spatial and temporal evolution of the infiltration characteristics in landslide bodies, especially in recent landslides. In fact, the variability and trends of infiltration in a landslide are extremely important factors for evaluating the stability of slopes and large-scale previous landslide bodies [22,28,29].
In this study, field investigations, infiltration experiments, and laboratory testing were conducted on undisturbed loess (UDL), a previous landslide body (PLB), and a new landslide body (NLB) associated with the Jiwachang Brickyard Landslide. Additionally, successive investigations and experiments were conducted on the NLB. According to the results, we try to explain how the infiltration characteristics changed with slope failure and how the infiltration evolved over time and space.

The Bailu Loess Tableland (263 km2) is located 5 km east of Xi’an city, Shaanxi Province, China (Figure 1a,b). The length and width are 28 km and 6–10 km, respectively. The stratigraphic unit comprises deposits of Malan loess, which was formed in the Late Pleistocene and is very sensitive to water because of its collapsibility [30], and Lishi loess, which was formed in the Middle Pleistocene and consists of interlayered loess and paleosol layers [3]. The Bailu Loess Tableland area has a semi-humid continental monsoon climate and is in the warm temperate zone, with a mean annual precipitation of 560 mm and a mean temperature of 13.1 °C [31]. The rainfall is mostly concentrated in the form of heavy precipitation in the summer and autumn, and the intensities vary from 1 mm/h to 20 mm/h. The Jiwachang Brickyard Landslide (34°16′00″ N, 109°05′49″ E) is located in the northwest corner of the Bailu Loess Tableland (Figure 1b). This landslide is characterized by a high speed and a long runout. The Jiwachang Brickyard Landslide was triggered on 17 September 2011 by heavy precipitation. In addition, the excavation of the brickyard contributed to this landslide to some extent, and this landslide destroyed the brickyard and killed 32 people [7]. The QR code (Figure 1g) shows a panorama of the Jiwachang Brickyard Landslide generated by an Unmanned Aerial Vehicle (UAV).

Based on the field investigation, the typical landslide N3# was selected (hereinafter referred to as NLB) for the infiltration experiments. The characteristic parameters of the PLB, recent landslides and flowslides, were recorded during the investigation (Table 1, Figure 1c–h and Figure 2). The sedimentary thicknesses of L1 (the first loess layer in the Malan loess), S1 (the first paleosol layer in the Lishi loess), and L2 (the first loess layer in the Lishi loess) are 8 m, 2 m, and 6 m, respectively. In total, approximately 90% of the PLB was covered by grass (Figure 2a), and biological crusts (Figure 2c), moss crusts (Figure 2d) and physical crusts were found to be abundant on the soil surface. However, grass and soil crusts were not observed on the NLB on 24 October 2017 (Figure 2b,e). The diameter of the fragmented loess blocks was 5–120 cm, but the diameter of most of the clods was less than 10 cm, which means that the structure of the soil in the NLB was severely disturbed.

4.1. In Situ Infiltration Rate and the Physical Index Measurement

A single-cylinder permeameter (S-CP) (diameter of 4.8 cm, length of 10 cm) was used to measure the quasi-steady infiltration rate (QIR) and the initial infiltration rate (IIR) of the soil [13,32,33]. During the in-situ infiltration experiments, the vegetation was trimmed to the soil surface before inserting the S-CP, and animal burrows were avoided when choosing the experiment site. Several measurements may be needed to determine the QIR. The entire process required approximately 1–3 h for each experiment site. When the infiltration experiment was finished, 5 soil samples were collected by slowly pushing a core ring (dimension of 5 cm, volume of 100 cm3) into the soil near the experiment site. The samples were then dried at 105 °C for 12 h in the laboratory and were used to measure the antecedent moisture content, bulk density, and porosity of the soil.
The IIR and QIR were calculated using the following equation [34]: where i is the IIR or QIR, VW is the volume of infiltrated water, t is the time required for the water to infiltrate, and A is the area of the cylinder (A = πr2, r = 2.4 cm).
The bulk density (g/cm3) was calculated using the following equation [34]: where Bd is the bulk density, ρ is the density of wet soil, m0 is the weight of wet soil, v is the volume of the core ring (100 cm3), and w is the moisture content (%).
The porosity (%) was calculated using the following equation [34]: where P is the porosity, Bd is the bulk density, ρd is the specific gravity, as measured in the laboratory.

To compare the differences in the infiltration rate among the UDL, PLB, and NLB, a series of experiments were conducted on 18 to 26 October 2017, in the L1, S1, and L2 soil layers (Figure 3a), the upper, middle, and lower parts of the PLB (Figure 3b), and the upper and lower parts of the NLB (Figure 3c). Flat surfaces were selected for the infiltration experiment, and the distances between the experimental points on the UDL, PLB, and NLB were 5 m, 50 m, and 5 m, respectively. It should be noted that the QIR of the NLB was difficult to measure during the experiment due to the strong collapsibility of the fragmented loess. Therefore, only the IIR of the soil was measured on the NLB. Successive infiltration experiments were conducted to identify changes in the infiltration rate in the NLB on 14 March 2018, and 17 July 2018.

The differences in the IIR, bulk density and porosity in the UDL, PLB, and NLB were evaluated with one-way ANOVA (p < 0.05) after testing for homogeneity of variance. The results in this study are expressed as the mean ± standard error of the mean (SEM). An independent t-test (p < 0.05) was used to evaluate the differences in the results of the infiltration experiments conducted on the NLB on 14 March 2018, and 17 July 2018. All statistical analyses were performed with SPSS 17.0 software (SPSS, Chicago, IL, USA).

5.1. Occurrence of Landslides and Flowslides Associated with Precipitation

5.2. The Spatial Differences in Infiltration Characteristics across Sites

Bulk density and porosity are the basic physical properties of soil. These properties have a direct influence on the soil infiltration properties and solute migration [35,36,37,38]. Based on the results generated for the UDL, PLB, and NLB (Figure 6), the UDL had the highest soil bulk density and the lowest porosity, while the NLB had the lowest soil bulk density and the highest porosity. The disturbed soils (PLB and NLB) exhibited a large and significant (p < 0.05) increase in porosity compared to the UDL (loess-paleosol sequences). Among the disturbed soils, there was a small and insignificant (p = 0.074) increase in the PLB compared with the NLB.

5.4. Temporal Evolution of the Infiltration Rate in the Recent Landslide

6.1. The Reason for Spatial Differences in the Infiltration Rate

In this study, the infiltration experiment results showed that the average infiltration rate was dramatically highest in the NLB, intermediate in the PLB, and lowest in the UDL. As expected, the highest IIR occurred in the NLB, which can be attributed to the high degree of collapsibility of fragmented loess and the lack of obstruction by crusts on the soil surface [4,29,39]. The IIR value in the PLB was 4.4 times higher than that in the UDL, and we attributed this result to the loose structure of the disturbed loess and the weak cementation between soil particles, which is not easily restored to the level of UDL within a short time [37]. Furthermore, the recovery state and surface soil crusts can account for the spatial differences in the PLB. In the UDL, the infiltration rate was higher in the loess layers (L1 and L2) than in the paleosol layer (S1), which can be attributed to the loess having a lower bulk density and a higher porosity than the paleosol.

6.2. Role and Function of Physical Crusts in the Infiltration Rate in a Recent Landslide

6.3. Role and Function of Biological Crusts and Moss Crusts on a Landslide Body

6.4. The Temporal Evolution of the Infiltration Rate in a Recent Landslide

Loess failure can change the microstructure of the soil, further influencing its macroscopic geotechnical properties. Therefore, the interparticle cementation and shear strength of disturbed soil are lower than those of undisturbed soil [37,50]. In fact, these variations have a remarkable impact on infiltration. Therefore, loess landslides can cause the infiltration rate to significantly increase during the one to three months after landslide formation because of the changes in the loess structure [51,52]. Due to the influences of the recovery state, rainfall, temperature, and microbial activities, moss crusts and biological crusts begin to form and gradually thicken within 5 to 20 years [28,29,53], causing the infiltration rate in recent landslides to decrease slowly [54]. According to the results of this study, more than 10 years may be required for the disturbed soil caused by a landslide to recover the same infiltration rate as UDL.

Our experiments revealed that the loess landslide process resulted in greatly increased infiltration, especially in a recent landslide. The average IIR in the NLB was approximately 200 times and 60 times higher than that in the UDL and PLB, respectively. Moreover, the infiltration capacity in the loess layer was slightly higher than that in the paleosol layer. Spatially, the infiltration rate in the PLB was highest in the upper part, intermediate in the middle part, and lowest in the lower part. Successive investigation and experiments conducted on the NLB revealed that the formation of raindrop-induced physical crusts caused the infiltration rate to rapidly decrease for four to five months, after which it slowly decreased. The results may decrease the risk of damage and offer suggestions when a landslide body needs to be used for industrial applications or as farmland.

The authors would like to thank Bin Tang and Weiqiang Guo for helping us during the landslide investigation. 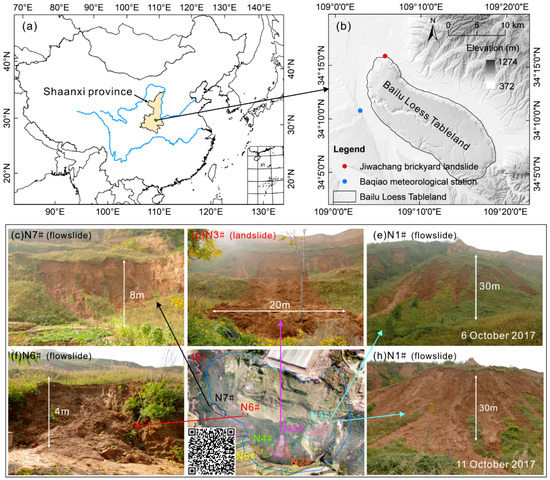 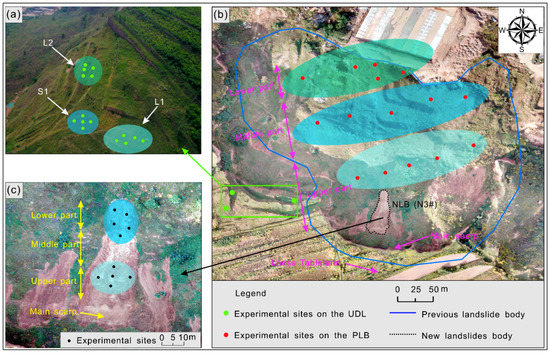 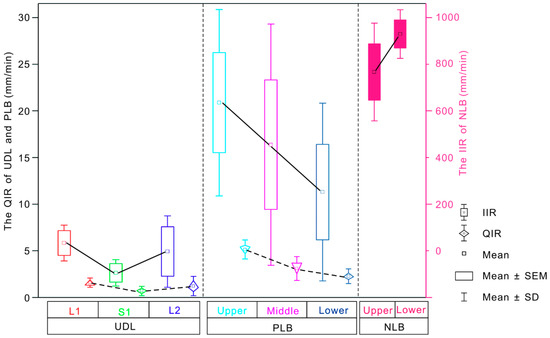 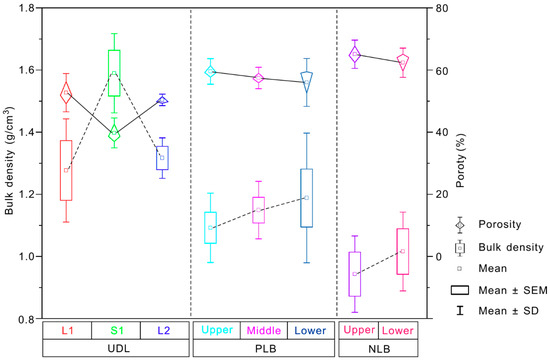 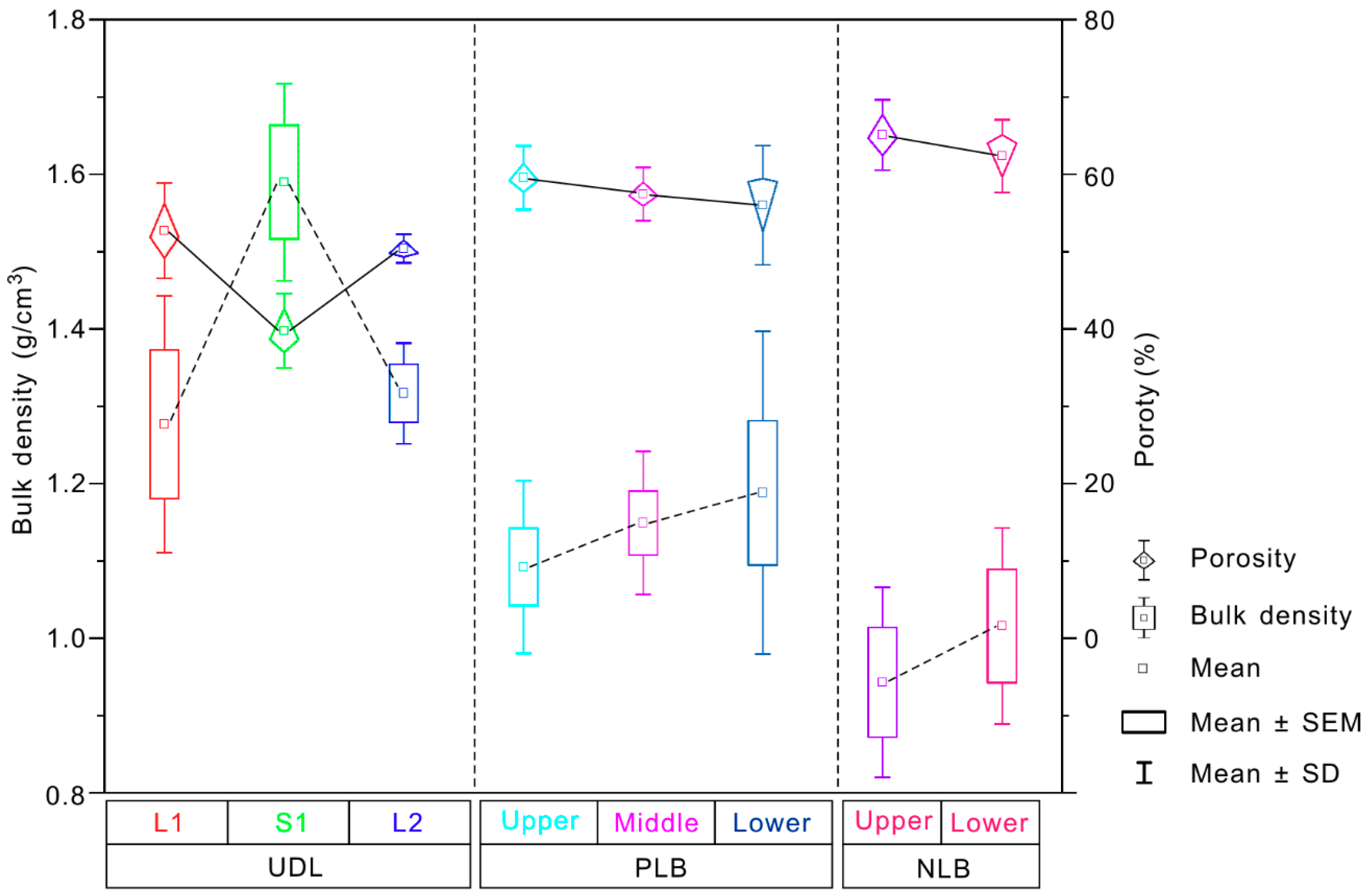