For improved drought planning and response, there is an increasing need for highly predictive and stable drought prediction models. This paper presents the performance of both homogeneous and heterogeneous model ensembles in the satellite-based prediction of drought severity using artificial neural networks (ANN) and support vector regression (SVR). For each of the homogeneous and heterogeneous model ensembles, the study investigates the performance of three model ensembling approaches: (1) non-weighted linear averaging, (2) ranked weighted averaging, and (3) model stacking using artificial neural networks. Using the approach of “over-produce then select”, the study used 17 years of satellite data on 16 selected variables for predictive drought monitoring to build 244 individual ANN and SVR models from which 111 models were automatically selected for the building of the model ensembles. Model stacking is shown to realize models that are superior in performance in the prediction of future drought conditions as compared to the linear averaging and weighted averaging approaches. The best performance from the heterogeneous stacked model ensembles recorded an R2 of 0.94 in the prediction of future (1 month ahead) vegetation conditions on unseen test data (2016–2017) as compared to an R2 of 0.83 and R2 of 0.78 for ANN and SVR, respectively, in the traditional approach of selection of the best (champion) model. We conclude that despite the computational resource intensiveness of the model ensembling approach, the returns in terms of model performance for drought prediction are worth the investment, especially in the context of the continued exponential increase in computational power and the potential benefits of improved forecasting for vulnerable populations. View Full-Text
Keywords: ensemble; support vector regression; artificial neural networks; drought risk management; drought forecasting; ensemble member selection ensemble; support vector regression; artificial neural networks; drought risk management; drought forecasting; ensemble member selection
►▼ Show Figures 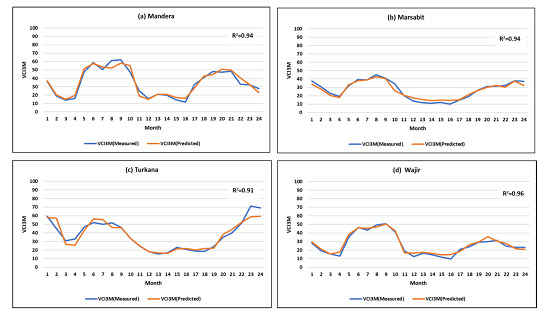