Analysis of Bird Flyways in 3D

Bird migration is a long studied phenomenon that involves animals moving back and forth from wintering sites and to reproductive grounds. Several studies have focused on identifying the timing, physiology and evolution of migration, but a spatial approach to understand the migratory routes is still an open challenge. Geographic Information Systems (GIS) can provide the tools to explore such a complicated issue. Birds usually move from the wintering sites to spring breeding grounds in multiple flights, stopping at intermediate sites to rest and refuel, being unable to cover the distance in a single travel. The choice of stopover sites by birds depends not only on their ecological features but also on their position and visibility along main migratory flyways. In this work, we calculated the possible migratory routes that minimize the distance covered or the elevation gaps for birds crossing the Southern Alps, simulating the flight within a network connecting potential stopover sites and other relevant point of passage, using the shortest path computation. Subsequently, we performed a visibility analysis along the identified flyways to understand which stopover sites, belonging to the Natura2000 network, were visible for a bird in an area with complex morphology. Data available from ringing stations confirm the selection or avoidance of some stopover sites based on their en route visibility. The knowledge of bird flyways and stopover sites has implications for conservation as well as for planning, especially for wind farms or other infrastructures. View Full-Text
Keywords: bird migration; spring migration; Alps; stopover sites; Natura2000; shortest path problem; elevation gain bird migration; spring migration; Alps; stopover sites; Natura2000; shortest path problem; elevation gain
►▼ Show Figures 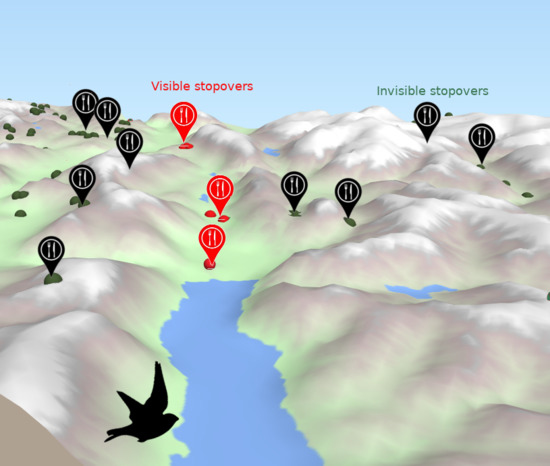