3D WebGIS systems have been mentioned in the literature almost since the beginning of the graphical web era in the late 1990s. The potential use of 3D WebGIS is linked to a wide range of scientific and application domains, such as planning, controlling, tracking or simulation in crisis management, military mission planning, urban information systems, energy facilities or cultural heritage management, just to name a few. Nevertheless, many applications or research prototypes entitled as 3D WebGIS or similar are mainly about 3D visualization of GIS data or the visualization of analysis results, rather than about performing the 3D analysis itself online. This research paper aims to step forward into the direction of web-based 3D geospatial analysis. It describes how to overcome speed and memory restrictions in web-based data management by adapting optimization strategies, developed earlier for web-based 3D visualization. These are applied in a holistic way in the context of a fully 3D line-of-sight computation over several layers with split (tiled) and unsplit (static) data sources. Different optimization approaches are combined and evaluated to enable an efficient client side analysis and a real 3D WebGIS functionality using new web technologies such as HTML5 and WebGL. View Full-Text
Keywords: 3D; WebGIS; performance; analysis; line-of-sight; visibility 3D; WebGIS; performance; analysis; line-of-sight; visibility
►▼ Show Figures 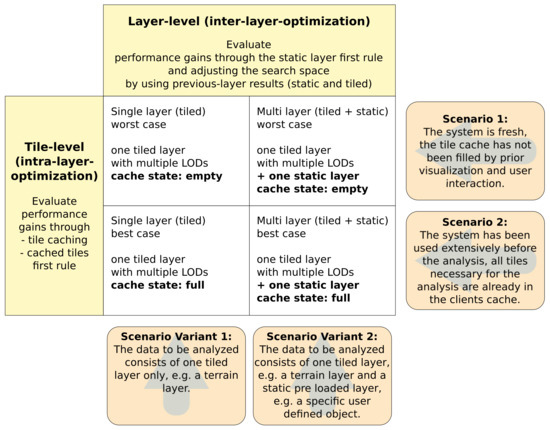