Shaking Maps Based on Cumulative Absolute Velocity and Arias Intensity: The Cases of the Two Strongest Earthquakes of the 2016–2017 Central Italy Seismic Sequence
Next Article in Special Issue

Protected areas (PAs) with natural, ecological, and cultural value play important roles related to biological processes, biodiversity, and ecosystem services. Over the past four decades, the spatial range and intensity of light pollution in China has experienced an unprecedented increase. Few studies have been documented on the light pollution across PAs in China, especially in regions that provide a greater amount of important biodiversity conservation. Here, nighttime light satellite images from the Defense Meteorological Satellite Program Operational Linescan System (DMSP-OLS) were selected to characterize light pollution trends across PAs using nighttime light indexes and hot spot analysis, and then the light pollution changes in PAs were classified. Furthermore, the causes of light pollution changes in PAs were determined using high-resolution satellite images and statistical data. The results showed the following: (1) Approximately 57.30% of PAs had an increasing trend from 1992 to 2012, and these PAs were mainly located in the eastern region, the central region, and a small part of the western region of China. Hot spot analysis showed that the patterns of change for the total night light and night light mean had spatial agglomeration characteristics; (2) The PAs affected by light pollution changes were divided into eight classes, of which PAs with stable trends accounted for 41%, and PAs with high increasing trends accounted for 10%. PAs that had high increasing trends with low density accounted for the smallest amount, i.e., only 1%; (3) The factors influencing light pollution changes in PAs included the distance to urban areas, mineral exploitation, and tourism development and the migration of residents. Finally, based on the status of light pollution encroachment into PAs, strategies to control light pollution and enhance the sustainable development of PAs are recommended. View Full-Text
Keywords: protected areas; light pollution; time series; DMSP-OLS; sustainable development; China protected areas; light pollution; time series; DMSP-OLS; sustainable development; China
►▼ Show Figures 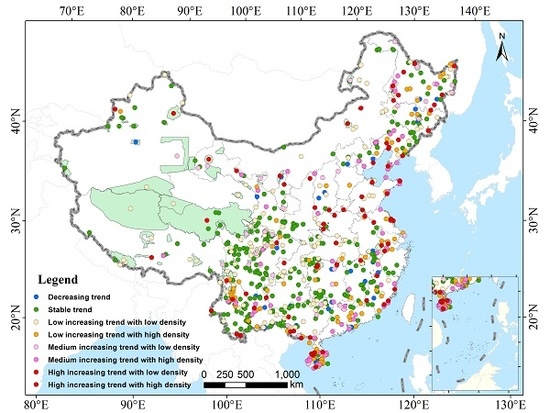