An Efficient Visualization Method for Polygonal Data with Dynamic Simplification

The goal of this study is to analyse the predictive performance of the random forest machine learning technique in comparison to commonly used hedonic models based on multiple regression for the prediction of apartment prices. A data set that includes 7407 records of apartment transactions referring to real estate sales from 2008–2013 in the city of Ljubljana, the capital of Slovenia, was used in order to test and compare the predictive performances of both models. Apparent challenges faced during modelling included (1) the non-linear nature of the prediction assignment task; (2) input data being based on transactions occurring over a period of great price changes in Ljubljana whereby a 28% decline was noted in six consecutive testing years; and (3) the complex urban form of the case study area. Available explanatory variables, organised as a Geographic Information Systems (GIS) ready dataset, including the structural and age characteristics of the apartments as well as environmental and neighbourhood information were considered in the modelling procedure. All performance measures (R2 values, sales ratios, mean average percentage error (MAPE), coefficient of dispersion (COD)) revealed significantly better results for predictions obtained by the random forest method, which confirms the prospective of this machine learning technique on apartment price prediction. View Full-Text
Keywords: random forest; OLS; hedonic price model; PCA; Ljubljana random forest; OLS; hedonic price model; PCA; Ljubljana
►▼ Show Figures 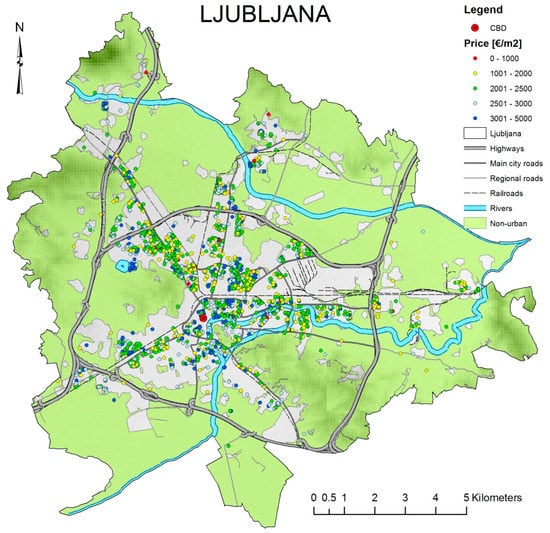 
Čeh M, Kilibarda M, Lisec A, Bajat B. Estimating the Performance of Random Forest versus Multiple Regression for Predicting Prices of the Apartments. ISPRS International Journal of Geo-Information. 2018; 7(5):168.