A Spatial Analysis of the Relationship between Vegetation and Poverty

The goal of this paper was to investigate poverty and inequities that are associated with vegetation. First, we performed a pixel-level linear regression on time-series and Normalized Difference Vegetation Index (NDVI) for 72 United States (U.S.) cities with a population ≥250,000 for 16 years (1990, 1991, 1995, 1996, 1997, 1998, and 2001 to 2010) using Advanced Very High Resolution Radiometer 1-kilometer (1-km). Second, from the pixel-level regression, we selected five U.S. cities (Shrinking: Chicago, Detroit, Philadelphia, and Growing: Dallas and Tucson) that were one standard deviation above the overall r-squared mean and one standard deviation below the overall r-squared mean to show cities that were different from the typical cities. Finally, we used spatial statistics to investigate the relationship between census tract level data (i.e., poverty, population, and race) and vegetation for 2010, based on the 1-km grid cells using Ordinary Least Squares Regression and Geographically Weighted Regression. Our results revealed poverty related areas were significantly correlated with positive high and/or negative high vegetation in both shrinking and growing cities. This paper makes a contribution to the academic body of knowledge on U.S. urban shrinking and growing cities by using a comparative analysis with global and local spatial statistics to understand the relationship between vegetation and socioeconomic inequality. View Full-Text
Keywords: geographically weighted regression; Normalized Difference Vegetation Index; poverty; spatial statistics; cities geographically weighted regression; Normalized Difference Vegetation Index; poverty; spatial statistics; cities
►▼ Show Figures 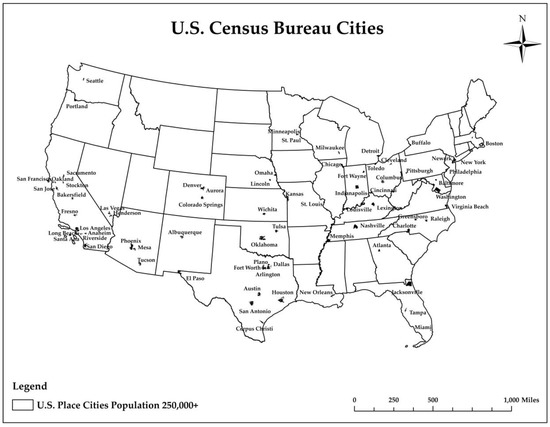