Identifying the influential nodes in complex networks is a fundamental and practical topic at the moment. In this paper, a new centrality measure for complex networks is proposed based on two contrasting models that have their common origin in the well-known PageRank centrality. On the one hand, the essence of the model proposed is taken from the Adapted PageRank Algorithm (APA) centrality, whose main characteristic is that constitutes a measure to establish a ranking of nodes considering the importance of some dataset associated to the network. On the other hand, a technique known as two-layers PageRank approach is applied to this model. This technique focuses on the idea that the PageRank centrality can be understood as a two-layer network, the topological and teleportation layers, respectively. The main point of the proposed centrality is that it combines the APA centrality with the idea of two-layers; however, the difference now is that the teleportation layer is replaced by a layer that collects the data present in the network. This combination gives rise to a new algorithm for ranking the nodes according to their importance. Subsequently, the coherence of the new measure is demonstrated by calculating the correlation and the quantitative differences of both centralities (APA and the new centrality). A detailed study of the differences of both centralities, taking different types of networks, is performed. A real urban network with data randomly generated is evaluated as well as the well-known Zachary’s karate club network. Some numerical results are carried out by varying the values of the α parameter—known as dumping factor in PageRank model—that varies the importance given to the two layers (topology and data) within the computation of the new centrality. The proposed algorithm takes the best characteristics of the models on which it is based: on the one hand, it is a measure of centrality, in complex networks with data, whose calculation is stable numerically and, on the other hand, it is able to separate the topological properties of the network and the influence of the data. View Full-Text
Keywords: networks centrality; Adapted PageRank Algorithm; PageRank; two-layers PageRank; spectral theory networks centrality; Adapted PageRank Algorithm; PageRank; two-layers PageRank; spectral theory
►▼ Show Figures 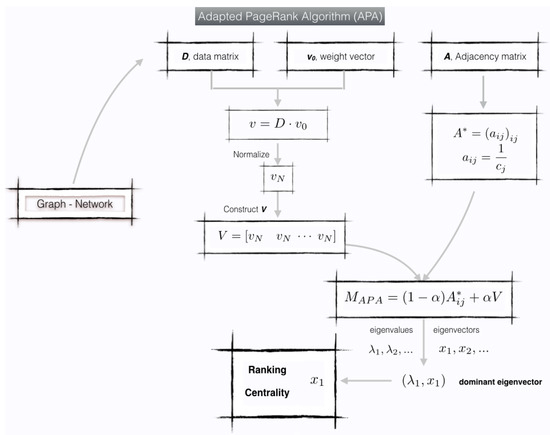