Social media is a rich source of spatial data but it has also many flaws and well-known limitations, especially in regard to representation and representativeness, since very little is known about the demographics of the user population. At the same time, the use of locational services, is in fact, dependent on those characteristics. We address this gap in knowledge by exploring divides between Twitter users, based on the spatial and temporal distribution of the content they produce. We chose five cities and data from 2015 to represent different socio-spatial contexts. Users were classified according to spatial and non-spatial measures: home range estimation; standard distance; nearest neighbor index, and; proposed localness index. There are distinct groups of geosocial media producers, which suggests that such datasets cannot be treated as uniform representations. We found a positive correlation between spatial behavior and posting activity. It is suggested that there are universal patterns of behavior that are conditioned by software services—the example of Foucauldian “technologies of self”. They can also represent the dominance of the most prolific users over the whole data stream. Results are discussed in the context of the importance and role of user location in social media. View Full-Text
Keywords: geosocial media; spatial behavior; Twitter; post-socialist geosocial media; spatial behavior; Twitter; post-socialist
►▼ Show Figures 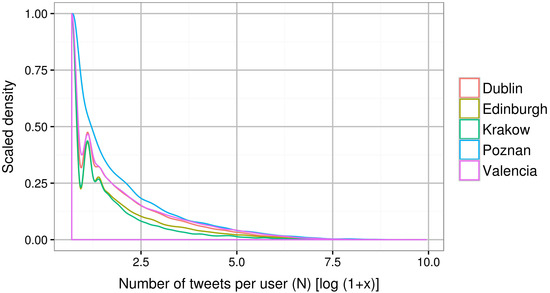