Soil loss is one of the most important causes of land degradation. It is an inevitable environmental and socio-economic problem that exists in many physiographic regions of the world, which, besides other impacts, has a direct bearing on agricultural productivity. A reliable estimate of soil loss is critical for designing and implementing any mitigation measures. We applied the widely used Revised Universal Soil Loss Equation (RUSLE) in the Khabur River Basin (KhRB) within the NW part of the Zagros Fold and Thrust Belt (ZFTB). The areas such as the NW Zagros range, characterized by rugged topography, steep slope, high rainfall, and sparse vegetation, are most susceptible to soil erosion. We used the Digital Elevation Model (DEM) of the Shuttle Radar Topography Mission (SRTM), Tropical Rainfall Measuring Mission (TRMM), Harmonized World Soil Database (HWSD), and Landsat imagery to estimate annual soil loss using the RUSLE model. In addition, we estimated sediment yield (SY) at sub-basin scale, in the KhRB where a number of dams are planned, and where basic studies on soil erosion are lacking. Estimation of SY will be useful in mitigation of excessive sedimentation affecting dam performance and watershed management in this region. We determined the average annual soil loss and the SY in the KhRB to be 11.16 t.ha−1.y−1 and 57.79 t.ha−1.y−1, respectively. The rainfall and runoff erosivity (R factor), slope length (L factor), and slope steepness (S factor), are the three main factors controlling soil loss in the region. This is the first study to determine soil loss at the sub-basin scale along with identifying suitable locations for check dams to trap the sediment before it enters downstream reservoirs. The study provides valuable input data for design of the dams to prevent excessive siltation. This study also aims at offering a new approach in relating potential soil erosion to the actual erosion and hypsometric integrals. View Full-Text
Keywords: RUSLE; soil loss; siltation; Zagros; sub-basin; hypsometric integral RUSLE; soil loss; siltation; Zagros; sub-basin; hypsometric integral
►▼ Show Figures 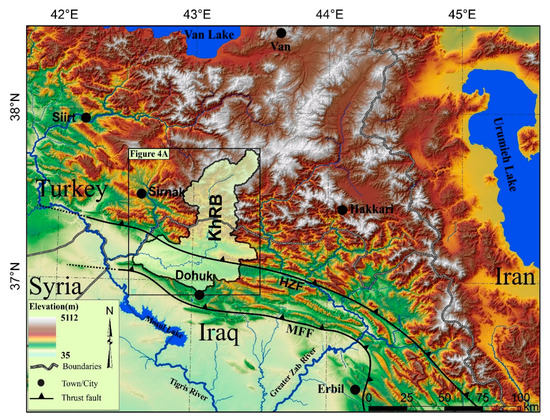