Flight schedule data were gathered from the Innovata 2017 flight database [17], which covers approximately 99% of available flight schedule data. The airport database used was OpenFlights.org for the location information of each airport, including IATA code, airport name, city, country, longitude, and latitude. For each airline alliance, we extracted all destination airports as nodes and routes as edges to form the alliance’s AAAN. The number of flights in 2017 for each route is the weight of each edge in the AAAN; in other words, the weight of each route is not equal. A route with a higher number of flights has a higher weight of the edge. Overall, there are 1830 destinations and 10,825 routes among the three airline alliances.

3.2. Categorizing the Type of Market Regions

In Table 1, the flight statistics of the three airline alliances are summarized. Code-share flights are excluded because double-counting would lead to an incorrect number of flights. The data shows that Star Alliance has the widest market layout, the largest market share, and the highest number of member airlines, destinations, routes, and flights among the three airline alliances. Overall, these three airline alliances have a 57% market share of the entire aviation market.
As shown in Figure 1, Oneworld, Star Alliance, and SkyTeam have similar major market regions: Asian, European, and American. However, the share of these three AAANs in each major market is different. Star Alliance operates the most extensive market among the three. SkyTeam focuses on the market in Asia and Europe (overall proportion: 80%) rather than the Pacific area. Oneworld has a relatively average distribution across the three major markets but does not operate in the African area.

4.3. The Market Layout of an Airline Alliance

Oneworld is mainly concentrated in the American and European markets (Figure 2a) because the airport node size and flight concentration of these two regions are much larger than those of the other regions. Notably, Oneworld is focused on a few Asian regions, and these market regions, such as Japan, Hong Kong, Malaysia, Sri Lanka, West Asia, and Australia, are relatively geographically distant from each other. In contrast to Oneworld, both Star Alliance and SkyTeam are focused not only on the Asian market but also on the American and European markets (Figure 2b,c). Overall, the market layout of Star Alliance and SkyTeam in terms of spatial distribution is more homogenous than that of Oneworld.
In the Asia-Pacific market, Star Alliance and SkyTeam have larger airport nodes, higher flight concentrations, and more airport communities than Oneworld. The largest airport communities in both of these airline alliances are comprised of Chinese airports. Remarkably, the Chinese airports within SkyTeam’s airport community have relatively higher importance than those in Star Alliance’s airport community because SkyTeam has two Chinese airlines (China Southern Airlines and China Eastern Airlines).
Oneworld and SkyTeam both have only one airport community in North America; however, Star Alliance has three airport communities there: two of them are mainly composed of airports in Canada, and the last comprises mainly airports in the United States. In terms of the member airline composition of these alliances, Oneworld and SkyTeam each have only one North American airline (Oneworld: American Airlines; SkyTeam: Delta Airlines), but there are two North American airlines in Star Alliance (Air Canada and United Airlines). United States air transportation is characterized by a high traffic volume and a well-developed airport network, both of which enhance the country’s internal connectivity; furthermore, North American airlines are uniformly distributed among the three airline alliances. Hence, the political boundaries of the United States could be considered to demarcate one airport community.
In Latin America, Oneworld has the largest number of airport communities and covers most of the South American countries; Star Alliance only has two airport communities but still covers most of the major airports in Latin American countries. The LATAM Airlines Group, the largest airline group in Latin America, is part of Oneworld, which is the main operator in South American countries (e.g., Brazil, Chile, Peru, and Paraguay); Star Alliance has the second-largest airline in Latin America, Avianca, which serves most of the Central American market (e.g., Colombia, Costa Rica, Ecuador, El Salvador, and Guatemala).

A dominant market position is indicated by the fact that only one airline alliance considers the departure and arrival airports with a route to be in the same market. According to Table 5, Star Alliance is the most dominant airline alliance out of all three alliances. First, the destination countries of Star Alliance are widely distributed throughout the world (=114), and the alliance has market dominance on the highest number of routes (=1109) among the three airline alliances; second, Star Alliance has more international impact caused by the relatively high proportion of international routes on which it has an international market position (=30.21%); nevertheless, it has market dominance on higher numbers of both domestic and international routes than SkyTeam and Oneworld.
Figure 3 shows the spatial distribution of market dominance for each airline alliance. Oneworld primarily serves the region from India to Europe and connects the United States and Central America. Star Alliance shows a strong presence in the European, North American, Latin American, and Chinese markets. SkyTeam focuses on the Chinese, European, and North American markets and the inter-continental region (from North America to Europe and from Europe to Africa).

A competitive market is one in which the departure and arrival airports are both within one market region in each of the airline alliances. The results show that competitive markets are distributed across 83 countries with 3111 routes, where the number of domestic routes and international routes is 2675 (85.99%) and 436 (14.01%), respectively.
As shown in Figure 4, the spatial distribution of competitive domestic markets is across three major regions: North America, Europe, and Asia-Pacific. While the international competitive markets are across four regions: North/Central America, Europe, West Asia, and Asia-Pacific. Remarkably, the United States has the largest number of domestic competitive routes (=2288, 85.53% of the dominant competitive routes).

This study was funded by the Ministry of Science and Technology (MOST) of Taiwan (MOST 108-2420-H-002 -025 –DR and MOST 108-2638-H-002-002-MY2) and the National Health Research Institutes (NHRI) of Taiwan (NHRI-110A1-MRCO-01212102). The authors also acknowledge the financial support provided by the Infectious Diseases Research and Education Center, the Ministry of Health and Welfare (MOHW) and National Taiwan University (NTU). The funders had no role in the study design, data collection and analysis, or manuscript preparation.

Thanks for four anonymous reviewers and all the editors who contributed to their comments and suggestions to improve the quality of the manuscript. 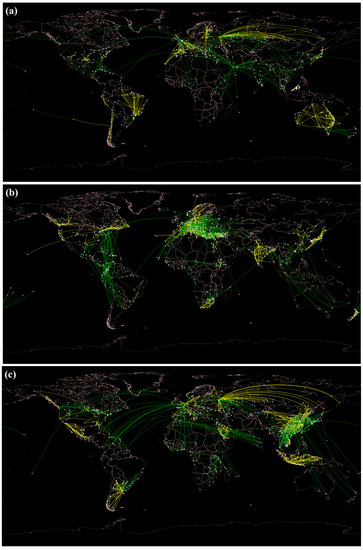 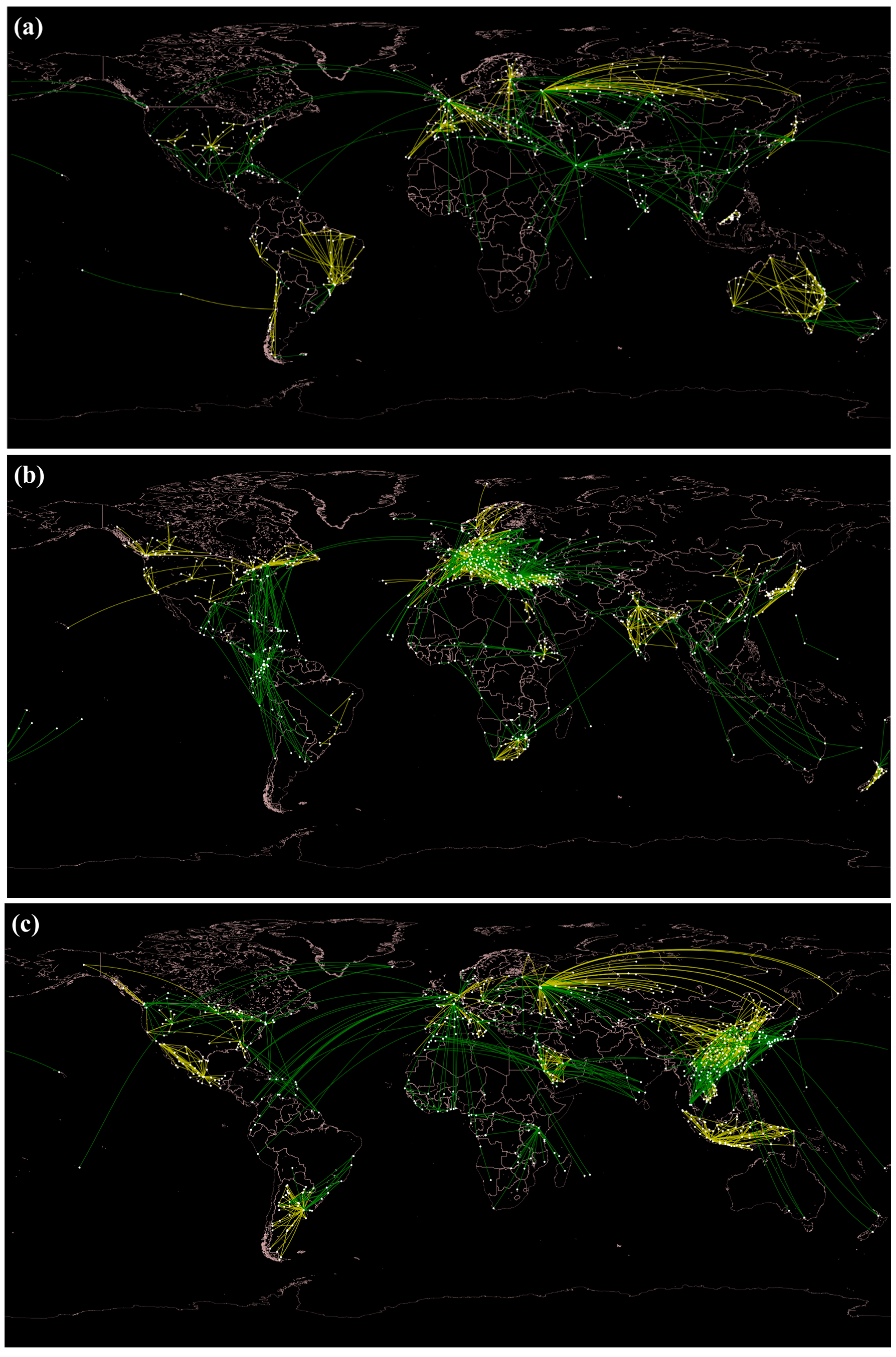