In Section 1, we mentioned several intrinsic drawbacks of wave variable algorithm which includes wave reflections and we discussed wave reflections in detail. However, wave reflections occur when impedance mismatch exists between the master site and the slave site, such that the incoming wave signals can only be partially absorbed by the master or slave site [29,30,31]. This can cause the performance of the teleoperated system to deteriorate [32].
Wave signals can travel within the bilateral teleoperation system using several paths as shown in Figure 3. Studies showed that these paths are peculiar to the wave variables. Velocity , and the wave impedance is the apparent damping term which develops wave signal, described in Equation (13). Feedback signals from the slave travel back to the operator using the slave feedback path shown in Figure 3. It is most preferable that no other signal should corrupt the slave feedback signal as it provides the operator with a credible feedback force from the slave device. However, this is not true for wave variable algorithm as wave reflections travel through the master and slave device communication channel. The outgoing wave signal on the master robot site consist of the incident signal that can be reflected if not absorbed completely.
Similarly, outgoing wave described in Equation (14) on the slave site consist of the incident wave signal such that if not absolutely absorbed by the slave device, some fraction of it will be reflected. If the wave reflections linger on the communication channel they can result in transient oscillations and inefficient feedback force.

Table 1 contain teleoperation parameters used in our simulations [35,38,49]. In this section, we compared simulation results between traditional wave variables and shaping wave filter.
Using Figure 3, we could illustrate the effect of change in dynamics (slave mass) on wave reflections. The one degree-of-freedom mathematical model for the master and slave robot system used in our simulations is as shown below: where Mm denotes the master device mass, Fh(t) represents the human force, Fm(t) is the force applied to the master device, ẍm is the acceleration of the master device, Ms denotes the mass of the slave device, Fs(t) represents the force due to the PD controller applied to the slave device, Fe(t) is the force applied on the slave’s end effector when in interaction with the environment, ẍs is the slave device acceleration.
The computation of Fs(t) the force due to the PD controller applied to the slave device used in our simulations: where Kc denotes the proportional gain and Bc denotes the damping gains, s is the commanded slave and sa is the actual slave signal.
For our simulations, we adopted the human force that has a spring-damper model of the human arm modeled as a proportional derivative (PD) position tracking controller from [36,49,50]: where the human intended position and velocity are denoted by and respectively.
In the literature, the damping constant , and spring constant used for simulation were set to 75 N/m and 50 N/m respectively [36,49,50]. Implementing the damping and spring constants of the human arm model provided an over-damped response which makes the system feel like the human operator positions the master robot without overshoot [50]. We set the command velocity of the master device to 0.05 m/s Figure 4 shows the fast Fourier transform (FFT) of the feedback force after applying the shaping wave filter (Figure 4b) and we compare the result in that of the traditional wave variable method (Figure 4a).
Slave masses 0.1 kg and 0.5 kg were used for the simulation with a time delay of 100 ms. From Figure 4a, the highest magnitude of the reflected signal is 0.8 when the wave variable algorithm was implemented. Using the shaping wave filter the dominant frequencies of the wave reflection were mitigated for both the simulated slave masses. The highest reflected magnitude when shaping wave filter was employed is 0.45 as shown in Figure 4b. The magnitude of wave reflection decreased by 44% when the shaping wave filter was implemented.
Despite the success of the shaping wave filters with respect to time delay, the method struggles when the size of the slave mass is increased from 0.1 kg to 0.5 kg. This is because the shaping wave filters mitigate wave reflections based on the time delay without considering the effect of change in dynamics on the frequency components of wave reflections. Nonetheless, to our knowledge, no previous research has examined this problem.

In this work, we develop a wave-variable-based controller (bandstop wave filter). In addition, we experimentally verify that the technique can mitigate wave reflections based on the time delay and changes to system dynamics of the teleoperated system. We apply the bandstop wave filter in the wave domain and filtered the wave signal along the communication channel. We placed the bandstop wave filter in the master-to-slave robot path to alleviate lower frequency components of the reflected signal. With the lower frequency components reduced, wave reflections that degrade teleoperation performance were mitigated and we obtained a better transient response from the system. For a specific range of slave mass, the bandwidth of the filter can be determined. We provide experimental verification of this wave filtering technique using a tele-robot system consisting of two Force Dimension parallel manipulators in Section 5.
From Figure 4a, as the frequency components increase the magnitude of reflected signal reduces. Hence, a better transient response can be obtained from the system by alleviating lower frequency components. As a result, the bandstop wave filter is positioned between the master and slave devices such that the outgoing wave signal, , is filtered as shown in Figure 5. The filter can either be placed along with the master-to-slave device path or vice versa because the wave reflections circulate in both directions of the communication channel. The bandstop filter is not placed in the slave-to-master path, because the capability of implementing the bandstop on the master side (local site) is more feasible than the slave side. In the local site, the user can feasibly fine-tune the filter to mitigate wave reflections than to the remote site. The results of placing a filter on both the master-to-slave path and the slave-to-master path did not warrant the more difficult to implement placement on the slave-to-master path.
The bandstop wave filter transfer function can be expressed as [36]:
denotes the lower cutoff frequencies and denotes the upper cutoff frequencies. Choosing the filter cutoff frequencies depends on the minimum and maximum mass variations anticipated on the slave device. To determine the cutoff frequencies, we tested several percentages of the maximum magnitude of the reflected signal, ranging from 5% to 15%. However, 10% of the maximum magnitude of the reflected signal produced cutoff frequencies that alleviate wave reflections without the loss of important signals. Since the filter operates in the wave domain, Equation (21) can be described as the wave transfer function. It also represents the scattering operator since it illustrates the relationship between wave signals. The implementation of the bandstop filter into the bilateral teleoperation system does not jeopardize its passivity provided the wave transfer function is not greater than 1 [29].
Equation (22) is true provided from Equation (21). Equation (22) holds for (21) [36]. This implies that the numerator and denominator satisfies for .

Here, we presented a bandstop wave filtering technique and experimentally verified its capability to improve teleoperation performance. The contributions of this research may be summarized as follows:
Although additional experimental testing may be needed to establish the full benefits of the bandstop wave filtering technique for teleoperation systems. Nonetheless, our experimental results provided evidence that the bandstop wave filtering technique may significantly improve teleoperation performance in applications including robotic surgery, search and rescue robots, teleoperated military combat drones, industrial robots, space exploration, etc.
The cut-off frequencies of the bandstop wave filter implemented in this work need to be tuned by the operator every time the range of slave mass changed. This is needful to target the most dominant frequencies of the wave reflections for the new range of slave mass. However, in the future, a self-tuning filter or adaptive filter that can mitigate wave reflections when the slave mass is change can be developed. To achieve this, the frequency of wave reflections can be determined based on the slave mass and implemented in the adaptive filter as a reference. Based on this reference, the adaptive filter will be able to tune itself to mitigate wave reflections. 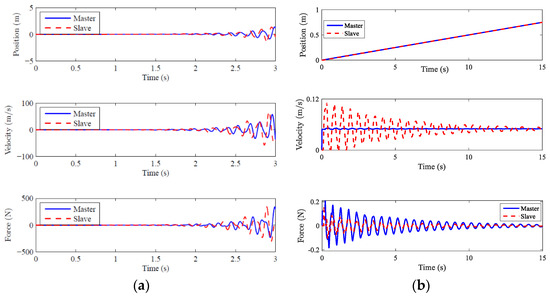 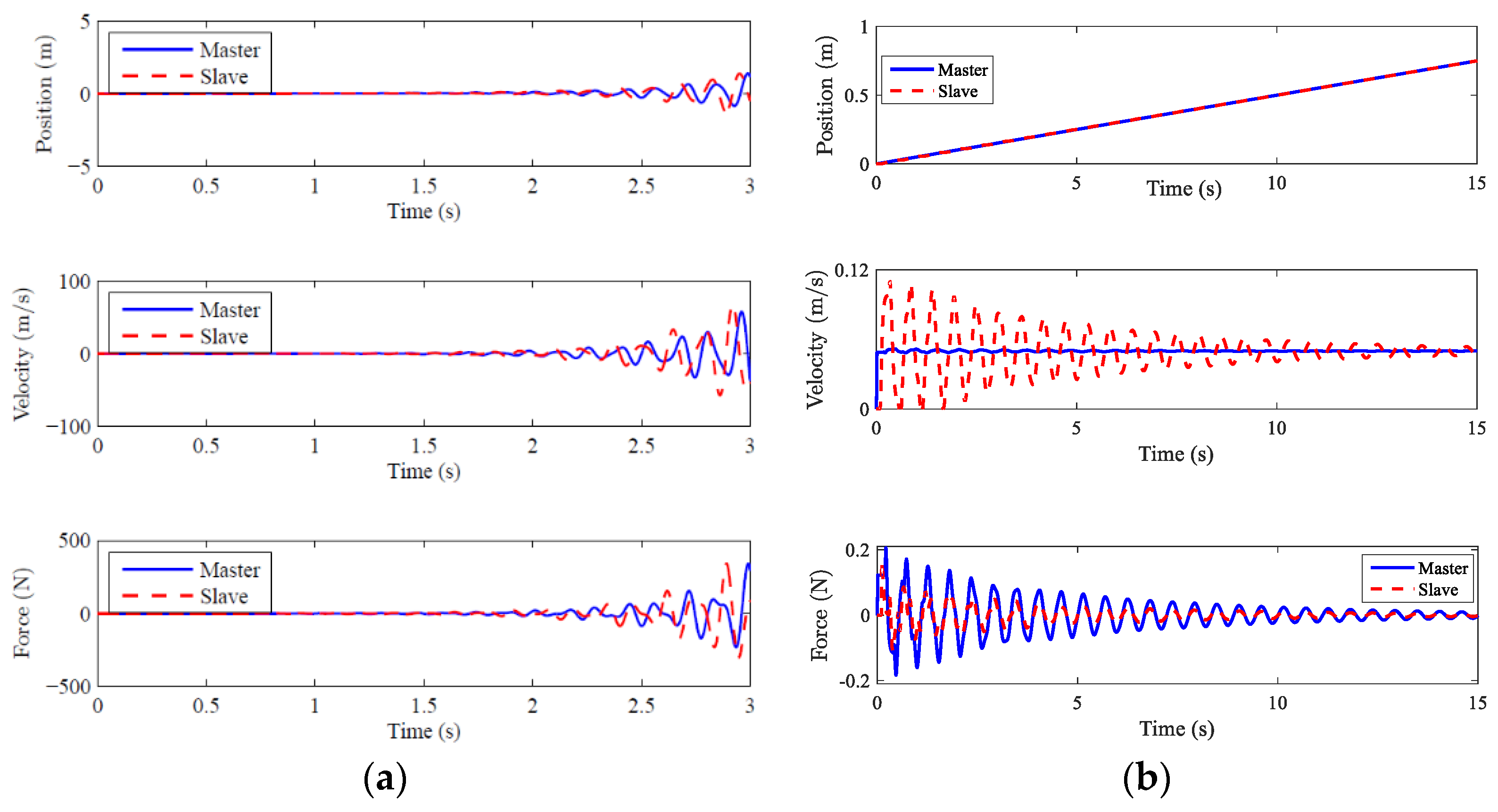 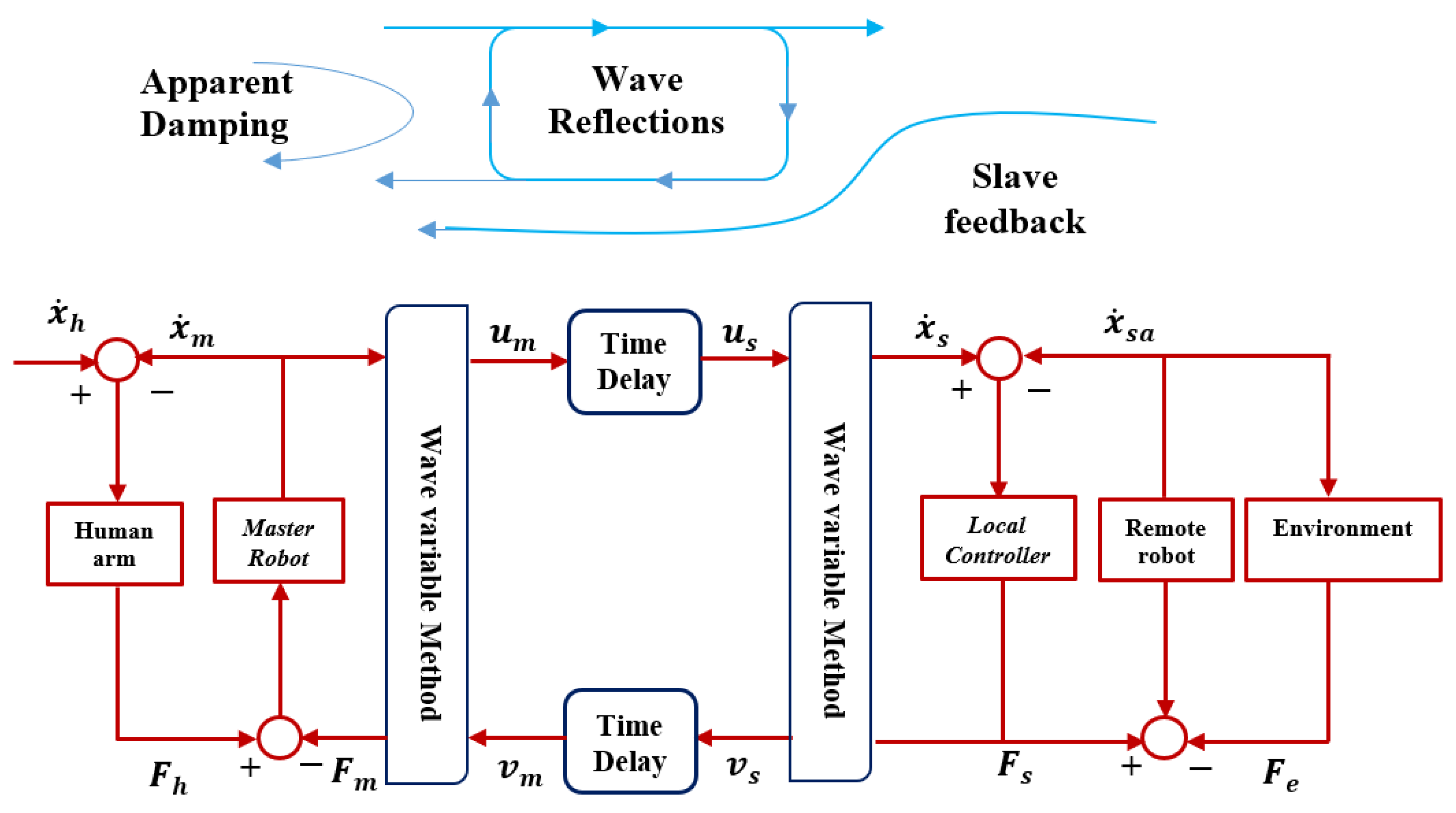 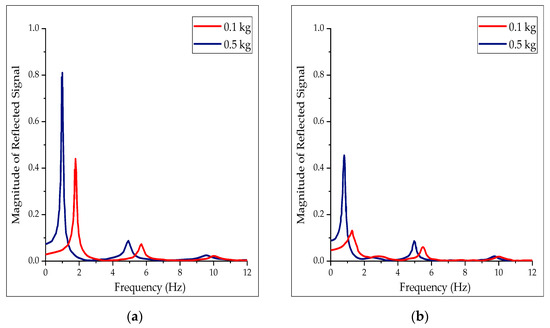 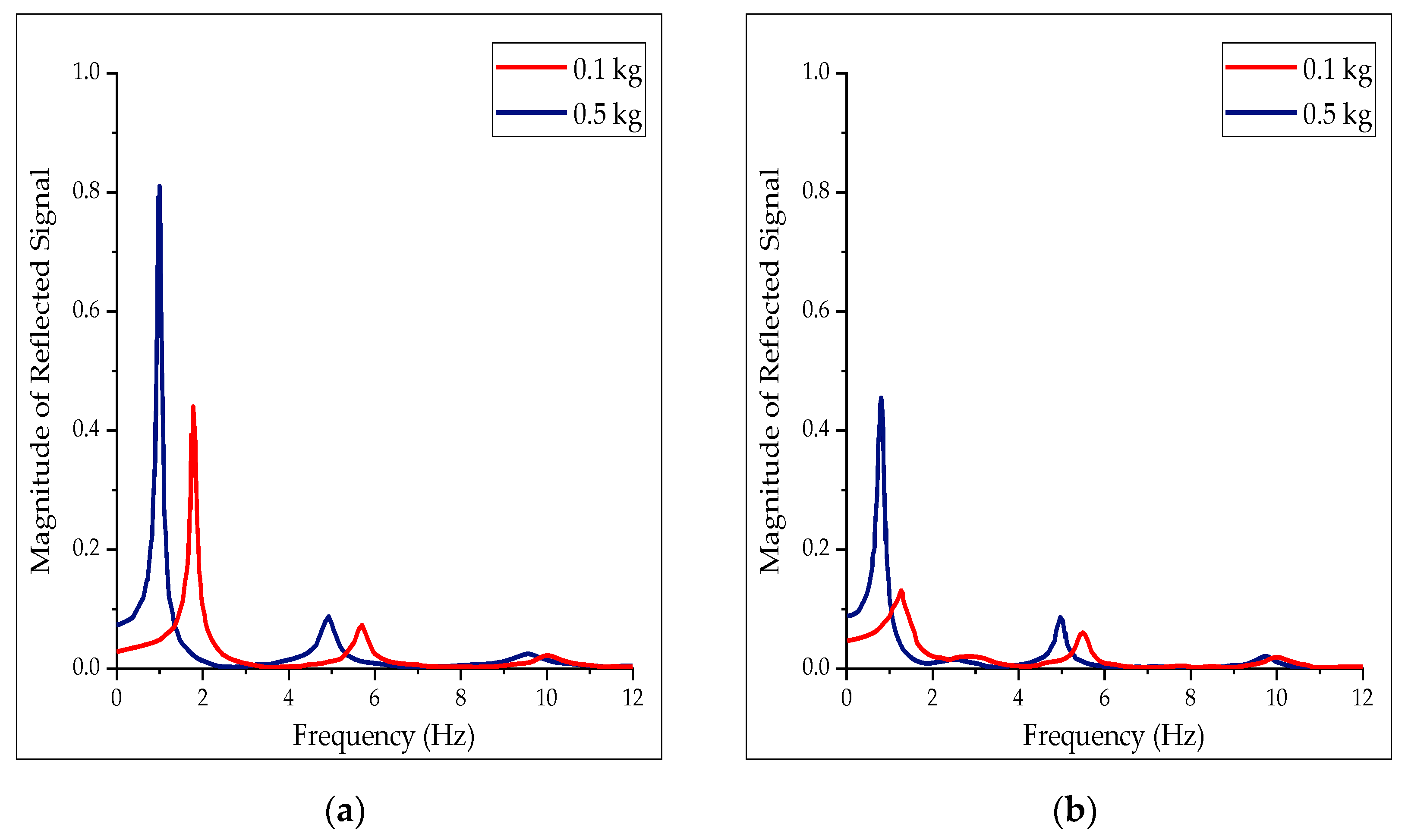 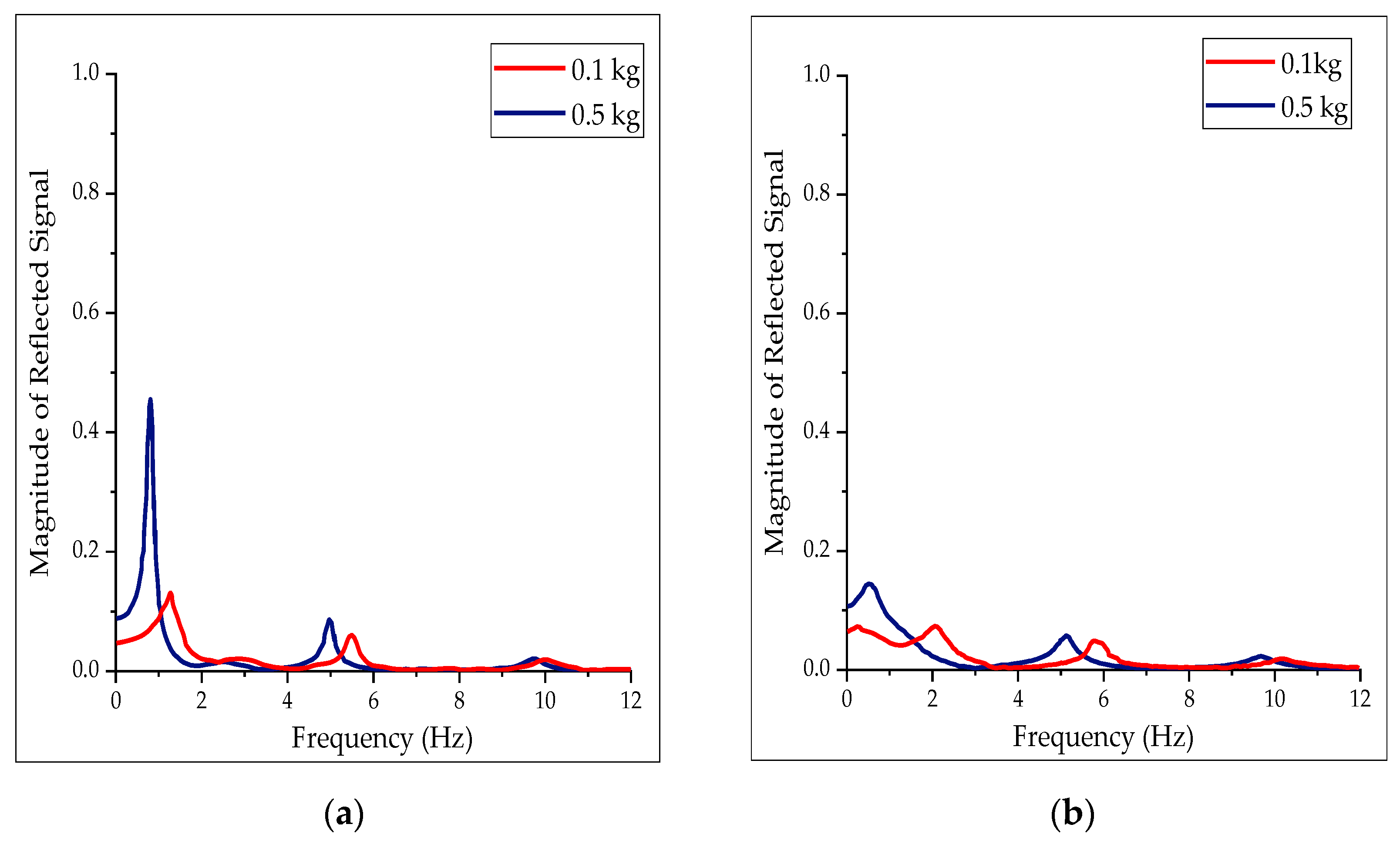 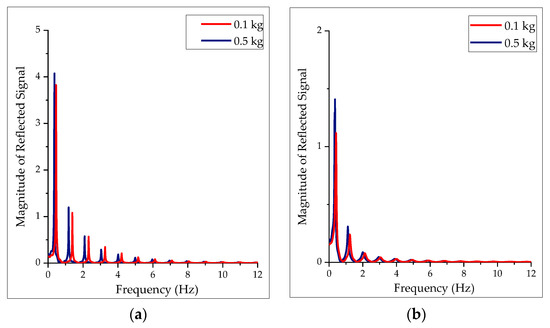 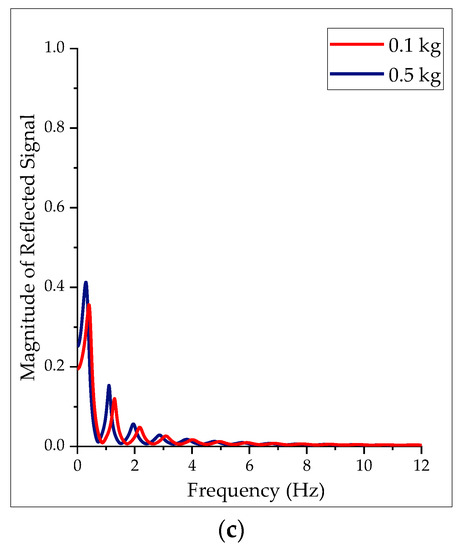 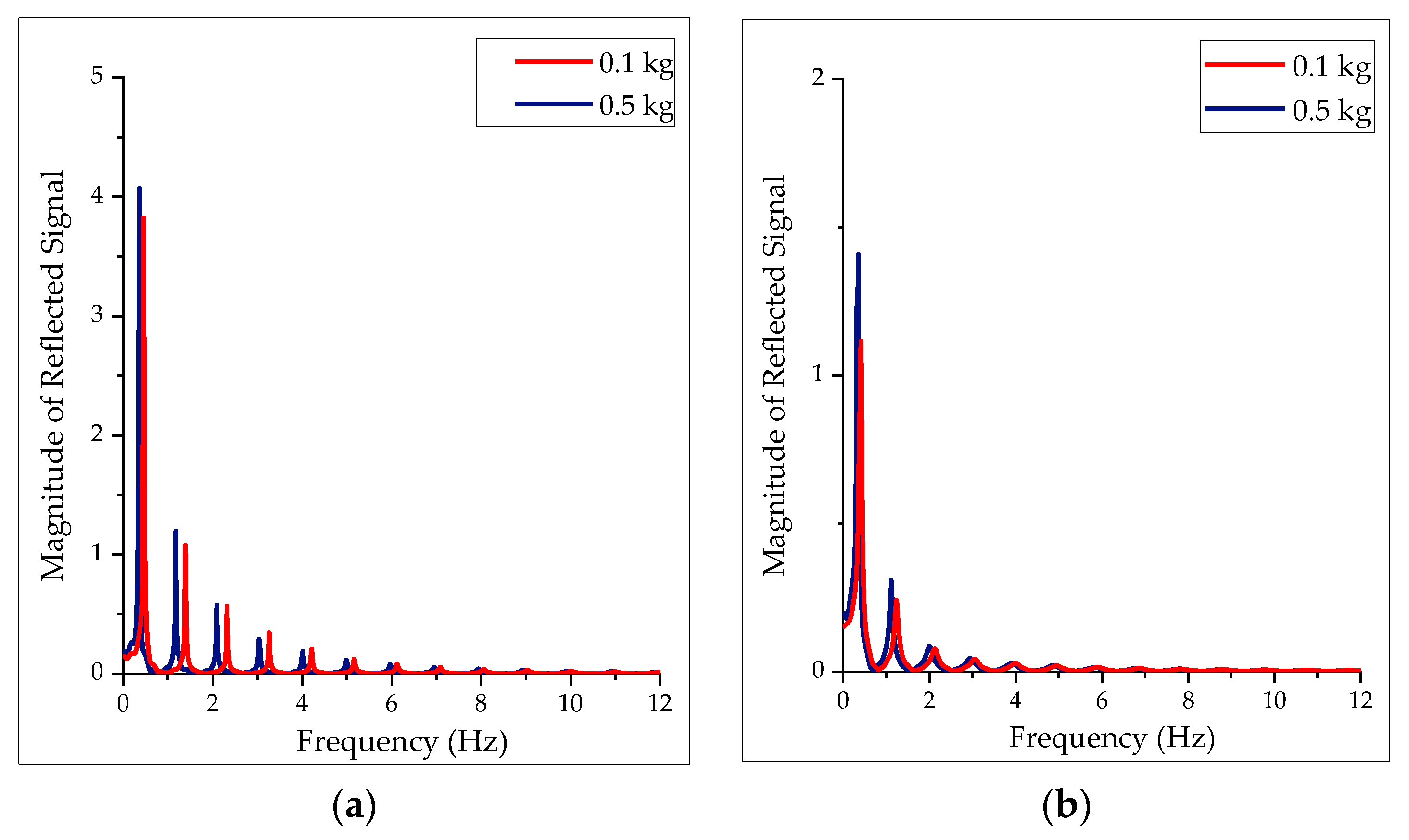 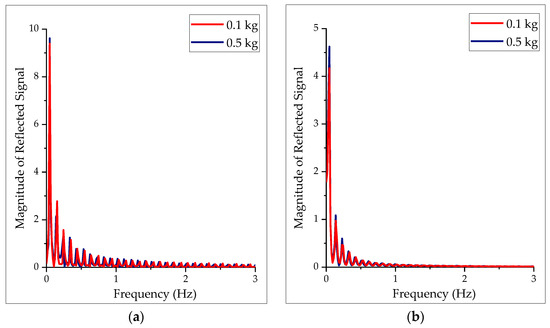 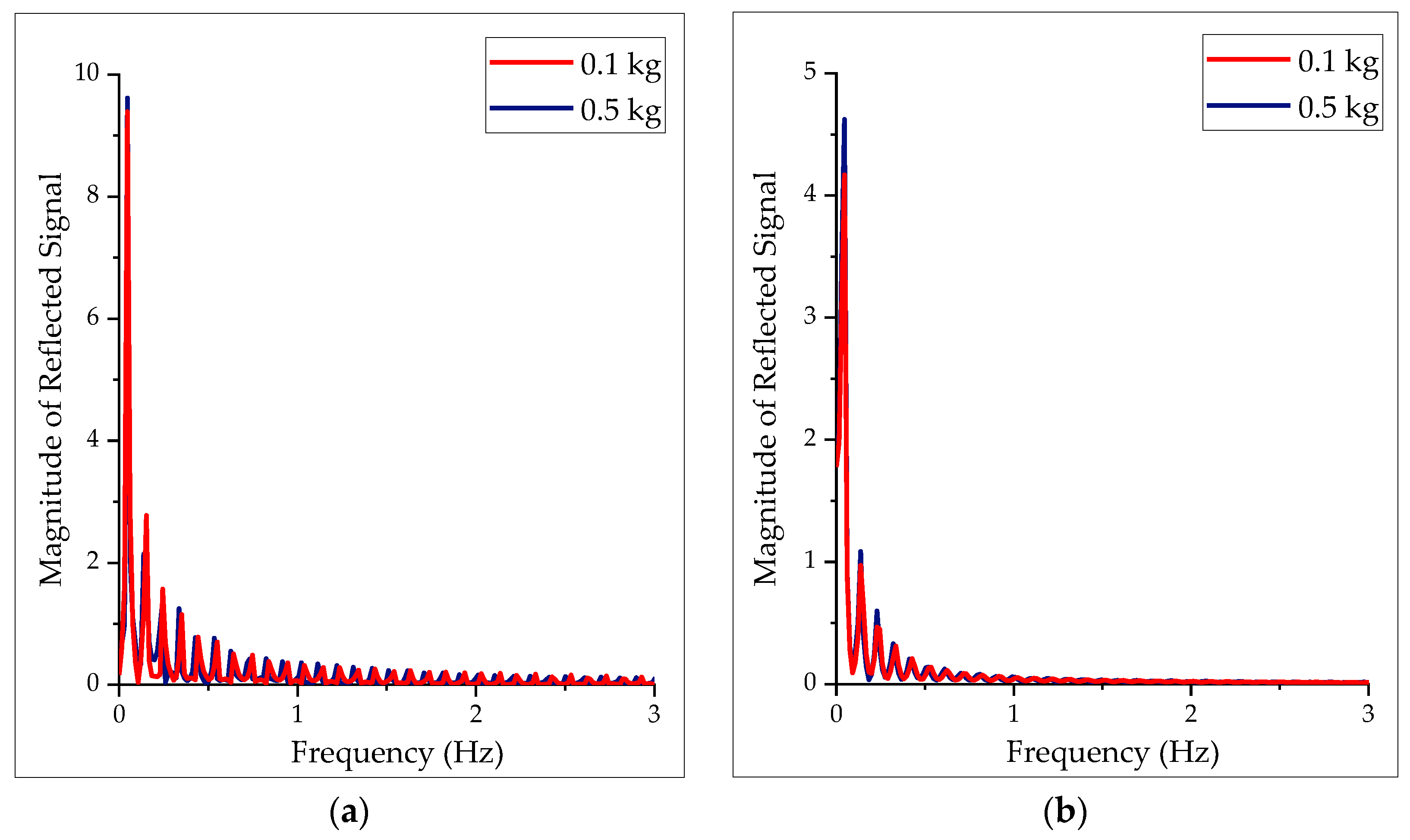 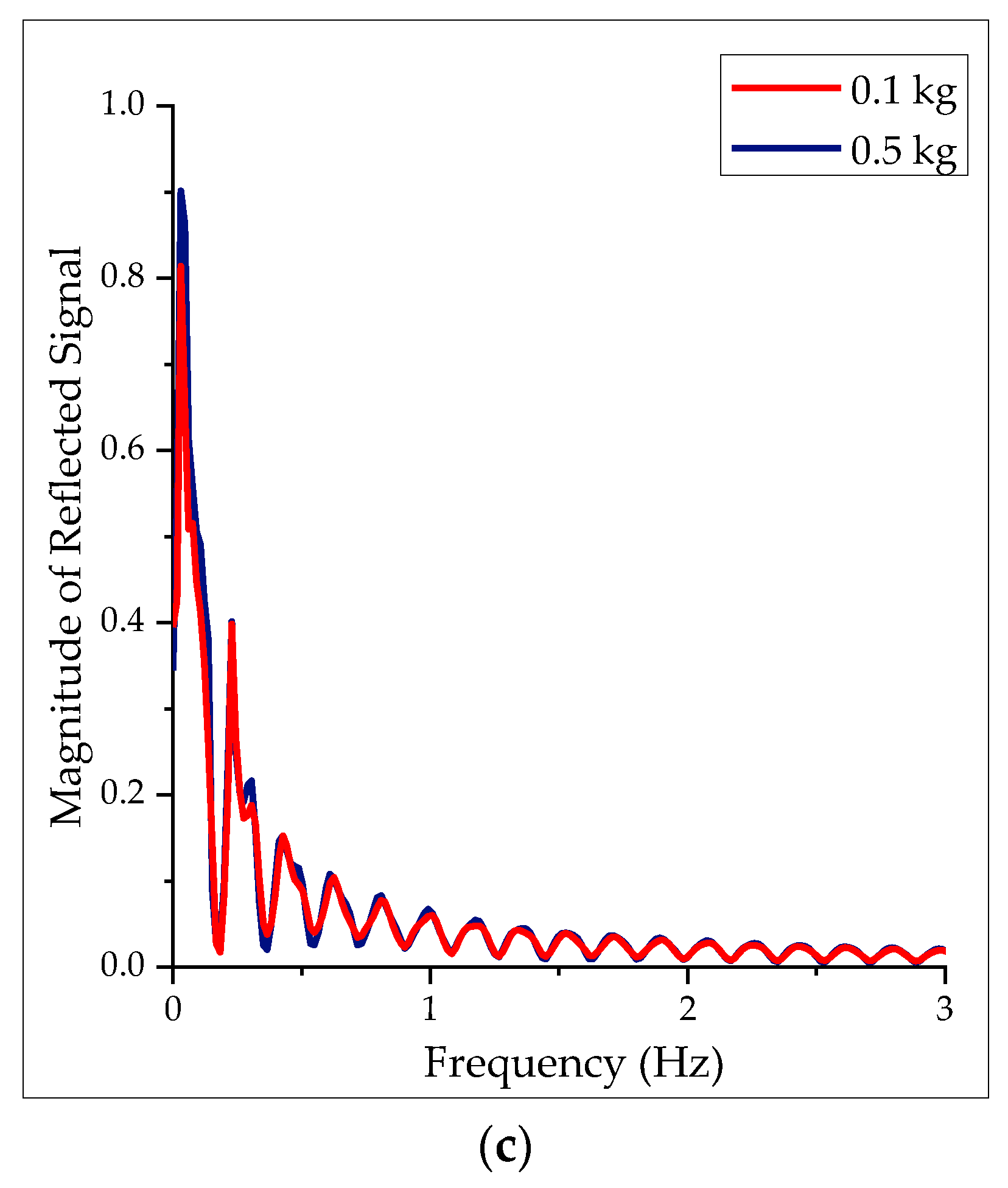 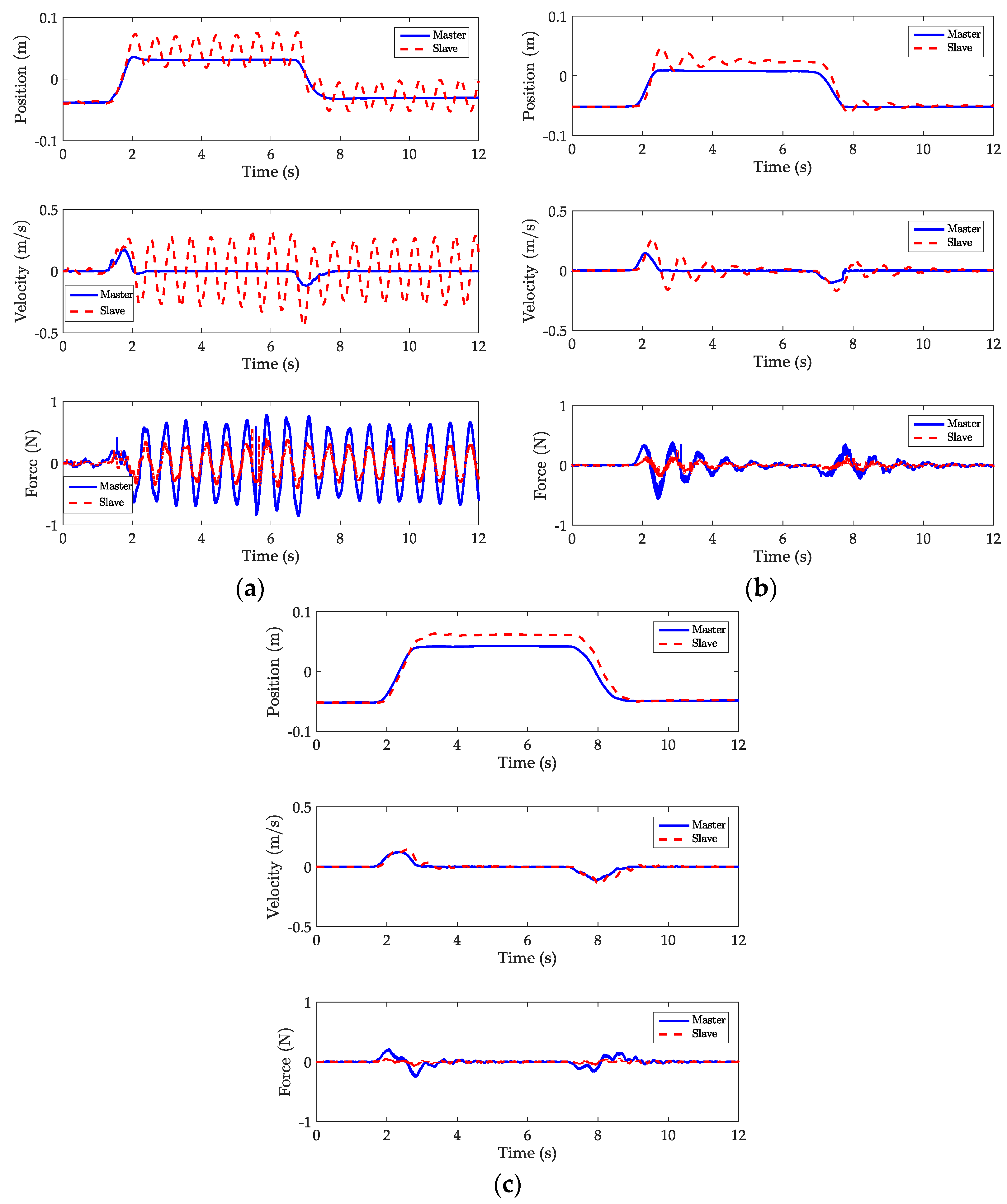 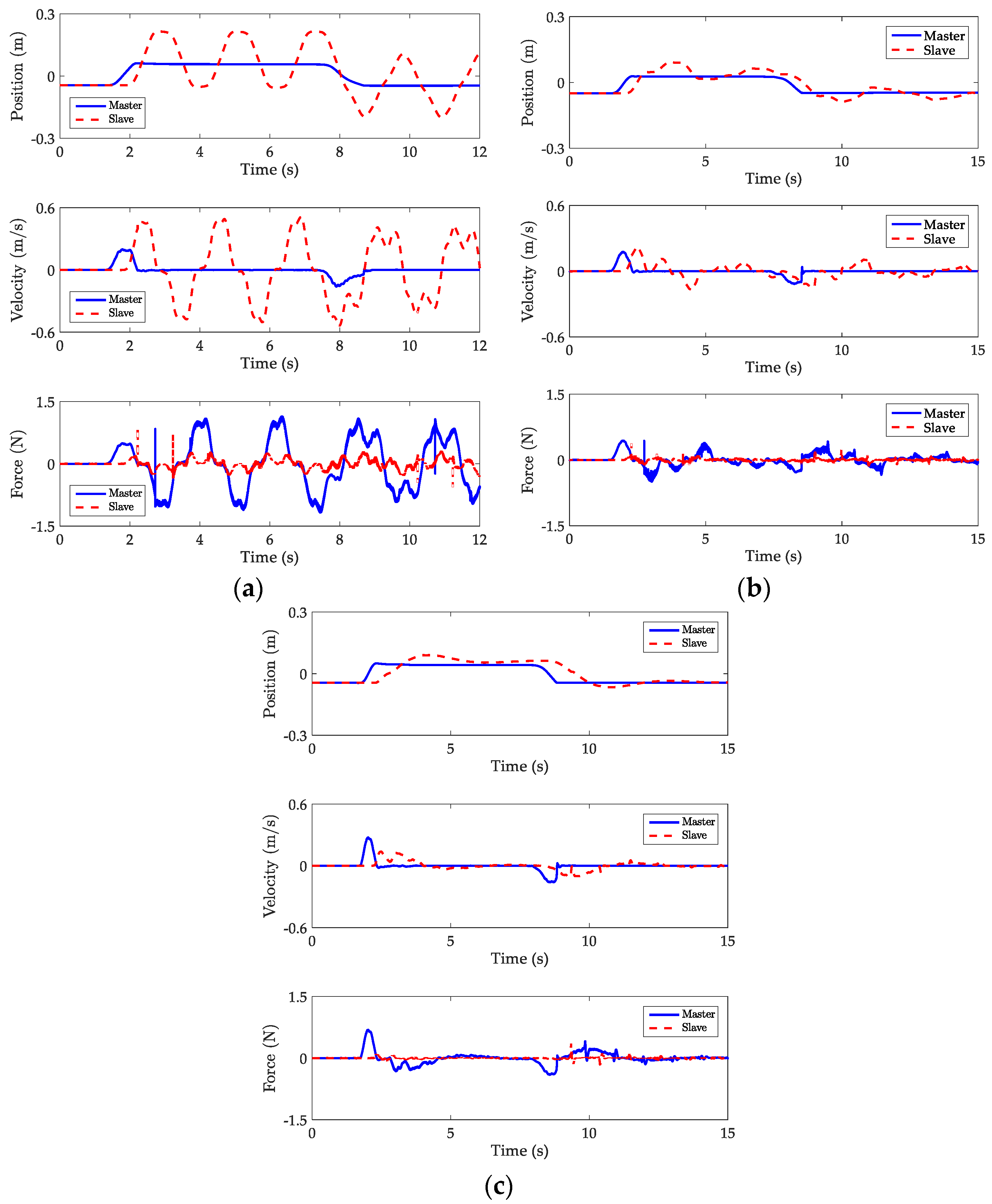 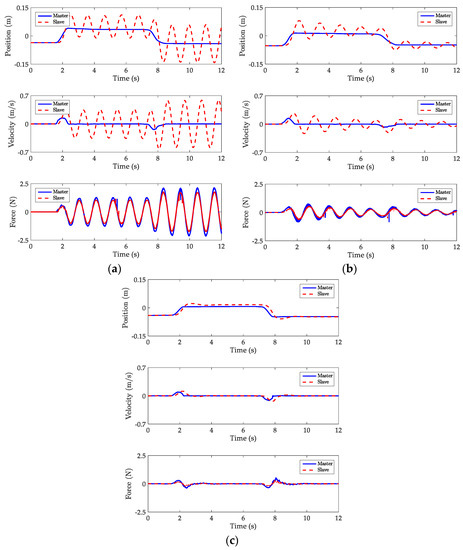 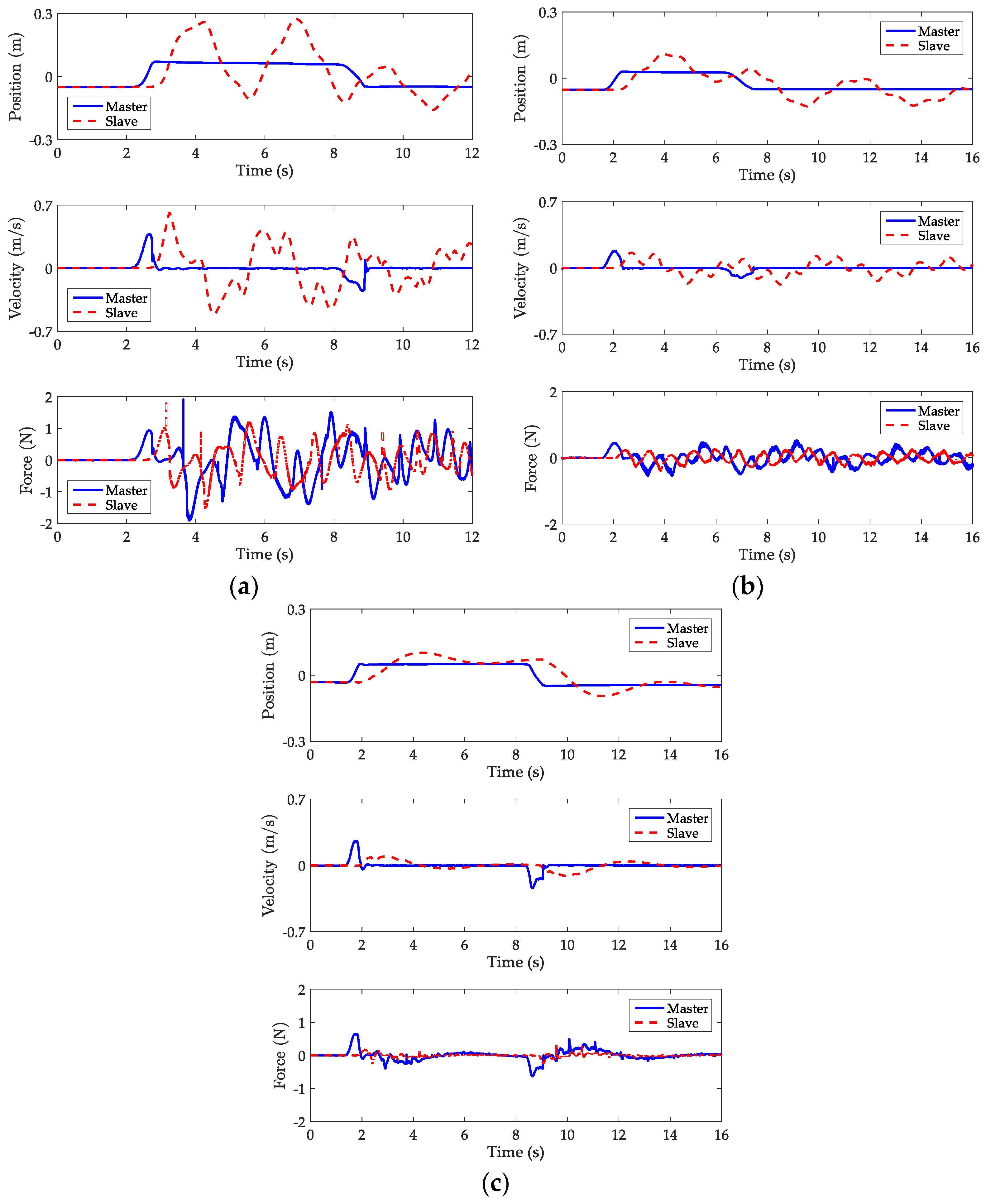 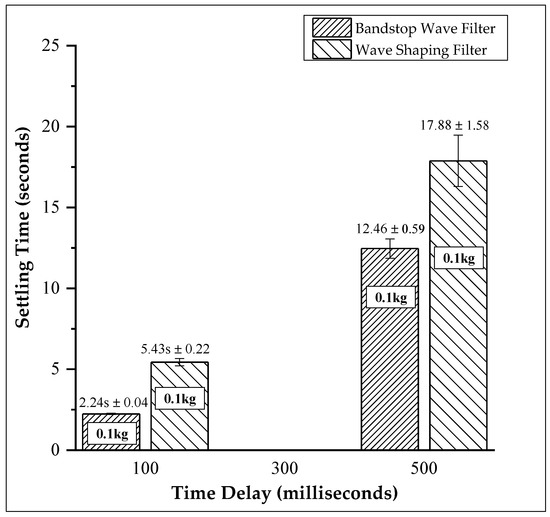