Long-Term Adaptivity in Distributed Intelligent Systems: Study of ViaBots in a Simulated Environment

This paper proposes a long-term adaptive distributed intelligent systems model which combines an organization theory and multi-agent paradigm—ViaBots. Currently, the need for adaptivity in autonomous intelligent systems becomes crucial due to the increase in the complexity and diversity of the tasks that autonomous robots are employed for. To deal with the design complexity of such systems within the ViaBots model, each part of the modeled system is designed as an autonomous agent and the entire model, as a multi-agent system. Based on the viable system model, which is widely used to ensure viability, (i.e., long-term autonomy of organizations), the ViaBots model defines the necessary roles a system must fulfill to be capable to adapt both to changes in its environment (like changes in the task) and changes within the system itself (like availability of a particular robot). Along with static role assignments, ViaBots propose a mechanism for role transition from one agent to another as one of the key elements of long term adaptivity. The model has been validated in a simulated environment using an example of a conveyor system. The simulated model enabled the multi-robot system to adapt to the quantity and characteristics of the available robots, as well as to the changes in the parts to be processed by the system. View Full-Text
Keywords: multi-robot systems; adaptivity; multi-agent systems; viable systems model multi-robot systems; adaptivity; multi-agent systems; viable systems model
►▼ Show Figures 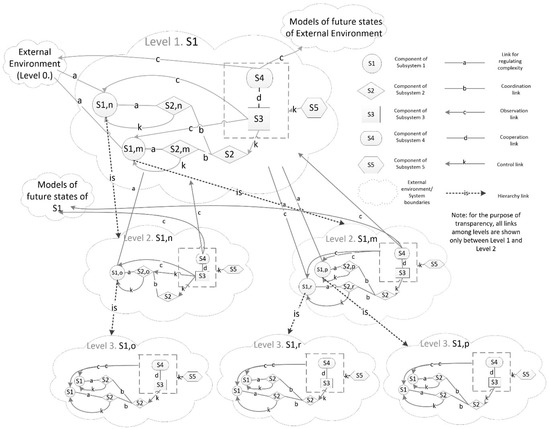