A cylindrical rolling robot is developed that generates roll torque by changing the shape of its flexible, elliptical outer surface whenever one of four elliptical axes rotates past an inclination called trigger angle. The robot is equipped with a sensing/control system by which it measures angular position and angular velocity, and computes error with respect to a desired step angular velocity profile. When shape change is triggered, the newly assumed shape of the outer surface is determined according to the computed error. A series of trial rolls is conducted using various trigger angles, and energy consumed by the actuation motor per unit roll distance is measured. Results show that, for each of three desired velocity profiles investigated, there exists a range of trigger angles that results in relatively low energy consumption per unit roll distance, and when the robot operates within this optimal trigger angle range, it undergoes minimal actuation burdening and inadvertent braking, both of which are inherent to the mechanics of rolling robots that use shape change to generate roll torque. A mathematical model of motion is developed and applied in a simulation program that can be used to predict and further understand behavior of the robot. View Full-Text
Keywords: shape changing; rolling; robot; cylindrical; elliptical; velocity control; economic locomotion; actuation burden; inadvertent braking shape changing; rolling; robot; cylindrical; elliptical; velocity control; economic locomotion; actuation burden; inadvertent braking
►▼ Show Figures 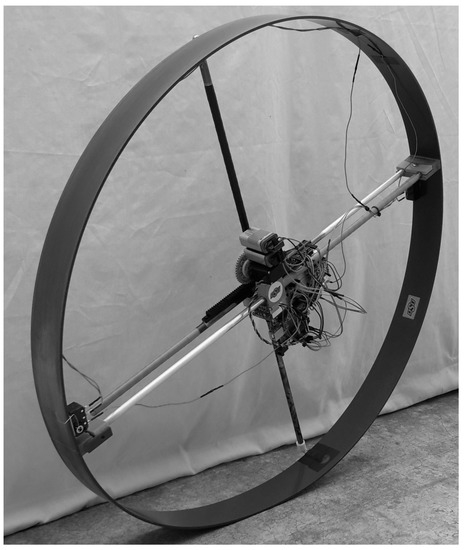