The Inhibitory Effect of Cordycepin on the Proliferation of MCF-7 Breast Cancer Cells, and Its Mechanism: An Investigation Using Network Pharmacology-Based Analysis

The death rate due to breast cancer is 14%, and this malignancy accounts for 23% of all cancer cases. Therefore, it remains a significant clinical and societal issue worldwide [1]. Patients diagnosed with breast cancer may receive drug therapy, surgery, hormone therapy, and/or radiotherapy. These treatments have a significant and long-term impact on patients’ lives owing to the side effects of drug therapy and hormone therapy and the limitations of surgery and radiotherapy [2,3]. Among them, cisplatin is one of the most widely used chemotherapeutic drugs for clinical treatment [4]. Although the use of cisplatin causes toxic adverse effects such as nephrotoxicity, this drug is still widely used due to its high efficacy as an anticancer drug [5]. For this reason, interest in the development of drugs from natural products for the prevention and treatment of breast cancer has increased. Experimental studies indicate that many natural products and their bioactive compounds have anticancer effects on breast cancer [6,7,8,9,10]. Various mechanisms, including inhibition of cell proliferation, [6,11] apoptosis [11], cell cycle arrest, inhibition of metastasis [6], downregulation of estrogen receptor alpha (ER-α) expression [7], and inhibition of angiogenesis of cells, are involved in anticancer effects on breast cancer [3]. Therefore, researchers in the past have urged continuing research on potential and effective natural products so as to identify their bioactive compounds for the treatment of breast cancer. Medicinal mushrooms such as Cordyceps species, Agaricus bisporus, Pleurotus eous, Ganoderma lucidum, and Amauroderma rude have shown anticancer effects on breast cancer both in vivo and in vitro [7,12]. Among medicinal mushrooms, Cordyceps species are considered to have various positive aspects in terms of safety (nontoxicity) [13] as well as clinical health effects such as immuno-enhancing activity [11], neuroprotective activity [14,15], anticancer effects [16], antimicrobial activity [17], and anti-inflammatory activity [18,19]. Many experimental studies have also been published on the anticancer effects of extracts of C. militaris in vivo and in vitro on breast cancer [20,21,22,23].
However, Cordyceps species are very rare in nature and are difficult to commercialize. Therefore, studies on Cordyceps species are not consistent because they have been studied using mycelia, wild-collected specimens, and Cordyceps cultured in insects, and other sources. Recently, the process of cultivating Cordyceps species in brown rice was successfully established, and many studies using Cordyceps species cultured in brown rice have been reported [18,24,25,26,27,28,29]. Among these, Cordyceps militaris, which is known as a representative Cordyceps species, has been cultured in brown rice, and its extract has been reported to have anticancer effects, including effects against breast cancer [25].
Many compounds such as cordycepin, mannitol, ergosterol, and polysaccharides isolated from C. militaris have been reported to have diverse pharmacological activities with anti-oxidative, anti-inflammatory, antiviral, antidiabetic, anti-platelet aggregation, and anticancer effects [30,31,32]. In particular, the anticancer effects of cordycepin on various cancers have been reported in many studies [20,33,34]. These anticancer effects of cordycepin are attributed to a structural similarity with cellular nucleosides and adenosine. Thus, cordycepin acts like a nucleoside analogue and inhibits the polyadenylation of mRNA of cancer cells [35,36]. While cordycepin has been examined in a number of studies related to cancer, there are no studies simultaneously examining the anticancer effects of cordycepin and C. militaris on breast cancer.
Network pharmacology has emerged as a promising approach to elucidate the systems-level mechanisms of natural products [37,38,39]. It understands complex diseases, including cancer, as a perturbation of interconnected complex biological networks and identifies the mechanism of drug action in terms of the network topology [40,41]. Natural products are known to exert their therapeutic effects by acting on multiple targets of multiple ingredients, and these mechanisms are well-suited to the core concept of network pharmacology. Therefore, researchers have employed network pharmacology methods to screen potent anticancer agents from natural products by predicting their potential targets and pathways [41,42,43].
In the present study, we investigated the anticancer effects of cordycepin and the extract of C. militaris cultured in brown rice on MCF-7 human breast cancer cells. To explore the systems-level mechanism of cordycepin, we predicted potential targets and pathways related to breast cancer using network pharmacology methods. Finally, we verified the predicted targets of cordycepin related to the apoptosis pathway in vitro.

The cell viability of MCF-7 cells in C. militaris concentrate and cordycepin was evaluated using an Ez-Cytox Cell Viability Assay Kit (Dail Lab Service Co., Seoul, Korea). Briefly, cells with a density of 1 × 104 cells/100 µL were seeded onto 96-well plates. After incubation for 24 h, C. militaris concentrate and cordycepin at various concentrations were added. After treatment for 24 h, 10 µL of Ez-Cytox solution was added and incubated for 30 min. The absorbance was measured at 450 nm (absorbance for live cells) in a microplate reader (PowerWave XS; Bio-Tek Instruments, Winooski, VT, USA). Cisplatin, which is one of the most widely used chemotherapeutic drug for breast cancer, was used as a positive control.

The nuclear condensation of MCF-7 cells induced by C. militaris concentrate and cordycepin was evaluated using Hoechst 33342 staining (Sigma Aldrich, St. Louis, MO, USA). Briefly, cells at a density of 4 × 105 cells/3 mL were seeded onto 6-well plates. After incubation for 24 h, C. militaris concentrate and cordycepin at various concentrations were added. After treatment for 24 h, 2 μL of Hoechst 33342 solution was added, and the plates were then incubated for 10 min. Subsequently, the stained cells were analyzed using an IX50 fluorescent microscope equipped with a charge-coupled device (CCD) camera (Olympus, Tokyo, Japan).

The apoptotic death of MCF-7 cells induced by C. militaris concentrate and cordycepin was evaluated using an image-based cytometric assay kit (Invitrogen, Temecula, CA, USA). Briefly, cells at a density of 4 × 105 cells/3 mL were seeded onto 6-well plates. After incubation for 24 h, C. militaris concentrate and cordycepin at various concentrations were added. After treatment for 24 h, cells were collected and suspended in Annexin V Binding Buffer (Life Technologies, Carlsbad, CA, USA). Then, Annexin V Alexa Fluor 488 (Invitrogen) was added and the cells were incubated in the dark for 30 min at 20 ± 5 °C. Next, apoptotic cells stained with green Annexin V Alexa Fluor 488 were counted and analyzed with a Tali image-based cytometer (Invitrogen).

Network pharmacological analysis was performed by predicting targets of ingredients in traditional Chinese medicine (TCM) and constructing a compound–target network. The potential targets of cordycepin were obtained from the TCM-mesh (http://mesh.tcm.microbioinformatics.org) based on the combined score [44]. The combined score is calculated by a model that predicts drug–target interaction using random forests [45]. To get as many potential targets of cordycepin as possible, we set the threshold of the combined score to 150 (minimal threshold suggested by TCM-mesh). Then, a compound–target network was constructed by linking herbal ingredients and their predicted targets using the drug–target interaction information.
Gene set enrichment analysis (GSEA) based on the Kyoto Encyclopedia of Genes and Genomes (KEGG) database was performed to identify potential pathways related to breast cancer using Enrichr [46]. Enrichr computes enrichment by assessing multiple gene-set libraries (e.g., gene ontology, KEGG, and Online Mendelian Inheritance in Man (OMIM)) and calculates adjusted p-values, Z-scores and combined scores for the gene lists of interest (target genes). The combined score is calculated by the logarithm of multiplication of the p-value and z-score (note that this combined score is different from the combined score in the TCM-mesh).

The data are presented as the mean ± standard deviation (SD). Statistical significance was determined using the Student’s t-test and the hypergeometric test. p-Values less than 0.05 were considered statistically significant.

Cell viability assays were performed to evaluate the cytotoxic effects of the C. militaris concentrate and cordycepin on MCF-7 cells. Cisplatin was used as the positive control. C. militaris concentrate suppressed cell proliferation in a concentration-dependent manner (Figure 1A, IC50: 73.48 ± 2.76 µg/mL). Cordycepin also significantly suppressed cell proliferation in a concentration-dependent manner (Figure 1B, IC50: 9.58 ± 0.99 µM). Cisplatin suppressed cell proliferation in a concentration-dependent manner, but its IC50 value was higher than that of cordycepin (Figure 1C, IC50: 48.50 ± 1.84 µM).
Based on these results, we investigated the effects of C. militaris concentrate and cordycepin on morphological changes, which contributed to the inhibition of MCF-7 cell viability, using a phase contrast inverted microscope and phase contrast fluorescence microscope (Figure 1D). After treatment with C. militaris (100 µg/mL) and cordycepin (25, 50 µM), most cells detached from the cell culture plate, and apoptotic cell morphology such as membrane blebbing, cell shrinkage, and cell condensation [47] increased in comparison to the untreated normal cells.

3.3. Effects of the Cordyceps Militaris Concentrate and Cordycepin on Apoptosis

In this study, the C. militaris concentrate cultured in brown rice and cordycepin isolated from C. militaris induced the cell death of MCF-7 human breast cancer cells. Network pharmacological analysis revealed a systems-level mechanism of cordycepin that could explain its suppressive effect on the proliferation of breast cancer cells, and the targets associated with the apoptosis pathway were verified by further experiments. This study provides a promising potential application not only for C. militaris cultured in brown rice itself but also for cordycepin isolated from C. militaris as a traditional medicine and alternative to chemotherapy in breast cancer. It also suggests that the strategy of integration of network pharmacology and experimental validation is a powerful tool to obtain a deep understanding of the mechanisms of natural products that act on multiple targets.

This work was supported by the Korea Institute of Planning and Evaluation for Technology in Food, Agriculture, Forestry (IPET) through Agri-Bio industry Technology Development Program, funded by Ministry of Agriculture, Food and Rural Affairs (MAFRA) (316025-05-4-SB010). This work was also supported by the Basic Science Research Program of the National Research Foundation of Korea (NRF), funded by the Ministry of Science, ICT & Future Planning (2019R1F1A1059173). 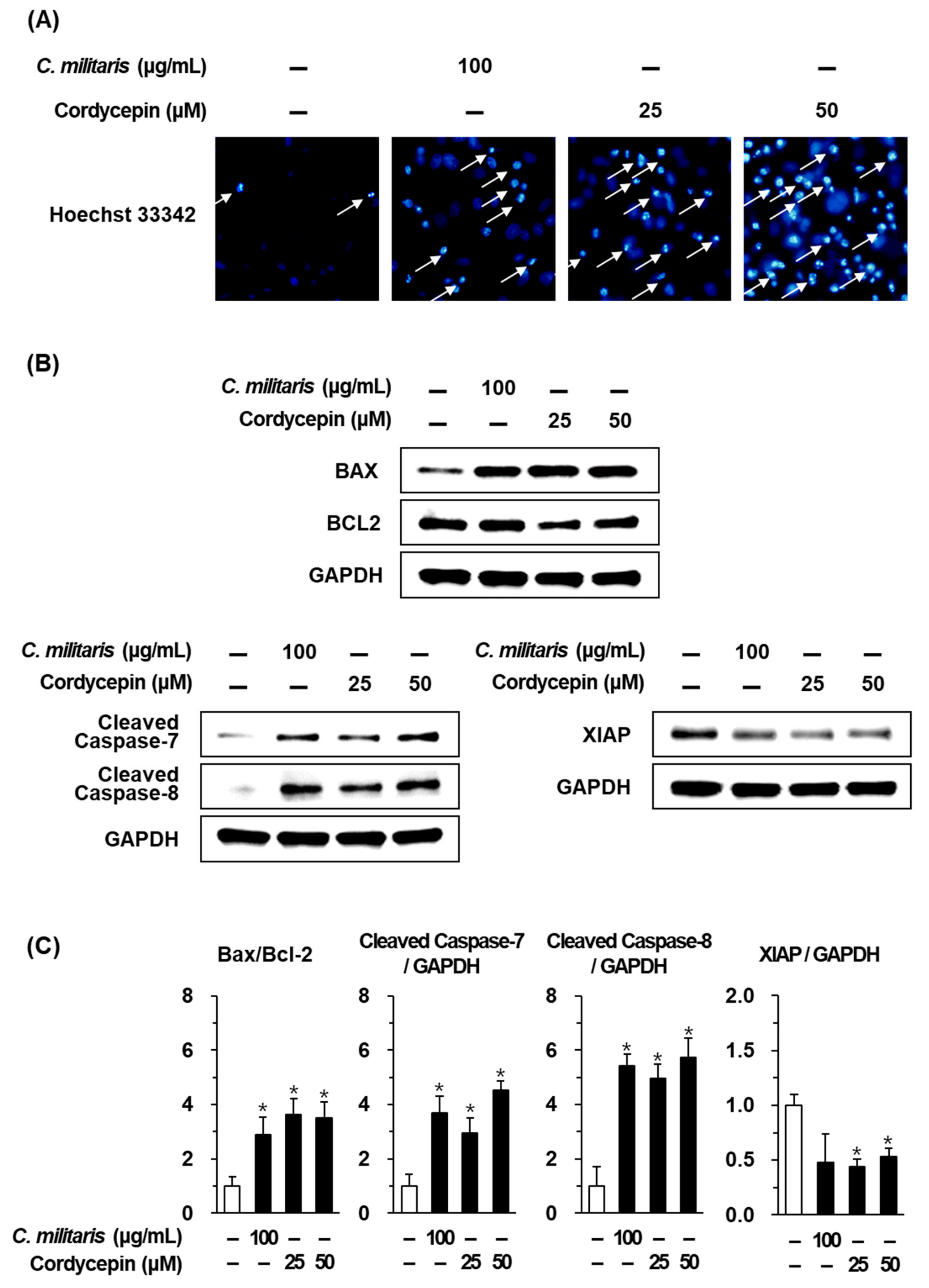