Bacterial resistance to β-lactams, the most commonly used class of antibiotics, poses a global challenge. This resistance is caused by the production of bacterial enzymes that are termed β-lactamases (βLs). The evolution of serine-class A β-lactamases from penicillin-binding proteins (PBPs) is related to the formation of the Ω-loop at the entrance to the enzyme’s active site. In this loop, the Glu166 residue plays a key role in the two-step catalytic cycle of hydrolysis. This residue in TEM–type β-lactamases, together with Asn170, is involved in the formation of a hydrogen bonding network with a water molecule, leading to the deacylation of the acyl–enzyme complex and the hydrolysis of the β-lactam ring of the antibiotic. The activity exhibited by the Ω-loop is attributed to the positioning of its N-terminal residues near the catalytically important residues of the active site. The structure of the Ω-loop of TEM-type β-lactamases is characterized by low mutability, a stable topology, and structural flexibility. All of the revealed features of the Ω-loop, as well as the mechanisms related to its involvement in catalysis, make it a potential target for novel allosteric inhibitors of β-lactamases. View Full-Text
Keywords: antibiotic resistance; TEM-type β-lactamases; β-lactam antibiotics; Ω-loop; inhibitor antibiotic resistance; TEM-type β-lactamases; β-lactam antibiotics; Ω-loop; inhibitor
►▼ Show Figures 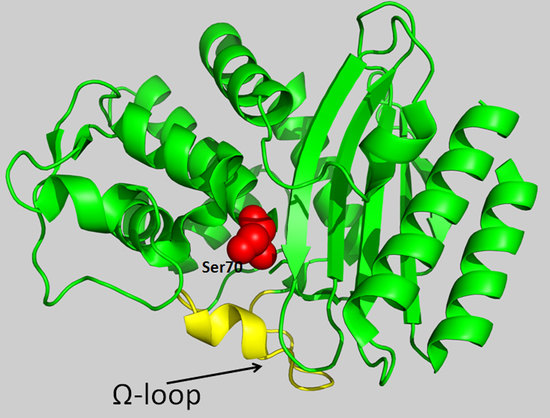