New Insights into Structural and Functional Roles of Indole-3-acetic acid (IAA): Changes in DNA Topology and Gene Expression in Bacteria

Plant hormones play a central role in various physiological functions and in mediating defense responses against (a)biotic stresses. In response to primary metabolism alteration, plants can produce also small molecules such as methylglyoxal (MG), a cytotoxic aldehyde. MG is mostly detoxified by the combined actions of the enzymes glyoxalase I (GLYI) and glyoxalase II (GLYII) that make up the glyoxalase system. Recently, by a genome-wide association study performed in Arabidopsis, we identified GLYI4 as a novel player in the crosstalk between jasmonate (JA) and salicylic acid (SA) hormone pathways. Here, we investigated the impact of GLYI4 knock-down on MG scavenging and on JA pathway. In glyI4 mutant plants, we observed a general stress phenotype, characterized by compromised MG scavenging, accumulation of reactive oxygen species (ROS), stomatal closure, and reduced fitness. Accumulation of MG in glyI4 plants led to lower efficiency of the JA pathway, as highlighted by the increased susceptibility of the plants to the pathogenic fungus Plectospherella cucumerina. Moreover, MG accumulation brought about a localization of GLYI4 to the plasma membrane, while MeJA stimulus induced a translocation of the protein into the cytoplasmic compartment. Collectively, the results are consistent with the hypothesis that GLYI4 is a hub in the MG and JA pathways. View Full-Text
Keywords: GLYI4; methylglyoxal; methyl-jasmonate; arabidopsis GLYI4; methylglyoxal; methyl-jasmonate; arabidopsis
►▼ Show Figures 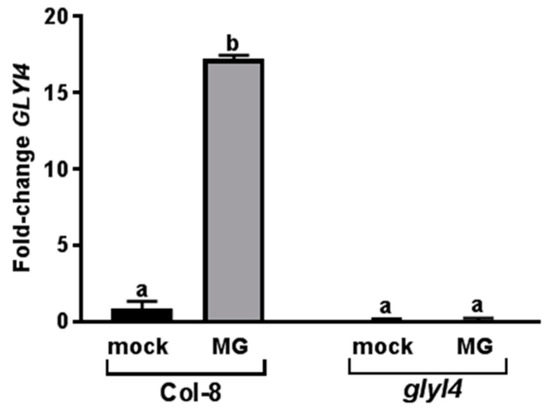