The plant hormone auxin controls almost all aspects of plant development through the gene regulatory properties of auxin response factors (ARFs) which bind so-called auxin responsive elements (AuxREs) in regulatory regions of their target genes. It has been proposed that ARFs interact and cooperate with other transcription factors (TFs) to bind to complex DNA-binding sites harboring cis-elements for several TFs. Complex DNA-binding sites have not been studied systematically for ARF target genes. ETTIN (ETT; ARF3) is a key regulator of gynoecium development. Cooperatively with its interacting partner INDEHISCENT (IND), ETT regulates PINOID (PID), a gene involved in the regulation gynoecium apical development (style development). Here, we mutated two ETT-bound AuxREs within the PID promoter and observed increased style length in gynoecia of plants carrying mutated promoter variants. Furthermore, mutating the AuxREs led to ectopic repression of PID in one developmental context while leading to ectopically upregulated PID expression in another stage. Our data also show that IND associates with the PID promoter in an auxin-sensitive manner. In summary, we demonstrate that targeted mutations of cis-regulatory elements can be used to dissect the importance of single cis-regulatory elements within complex regulatory regions supporting the importance of the ETT-IND interaction for PID regulation. At the same time, our work also highlights the challenges of such studies, as gene regulation is highly robust, and mutations within gene regulatory regions may only display subtle phenotypes. View Full-Text
Keywords: auxin response; cis-regulation; plant development; ETTIN; PINOID; INDEHISCENT; gynoecium; gene regulation auxin response; cis-regulation; plant development; ETTIN; PINOID; INDEHISCENT; gynoecium; gene regulation
►▼ Show Figures 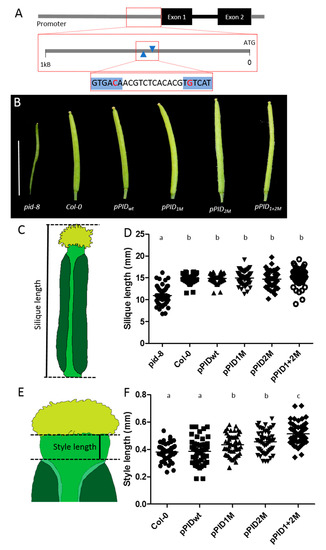